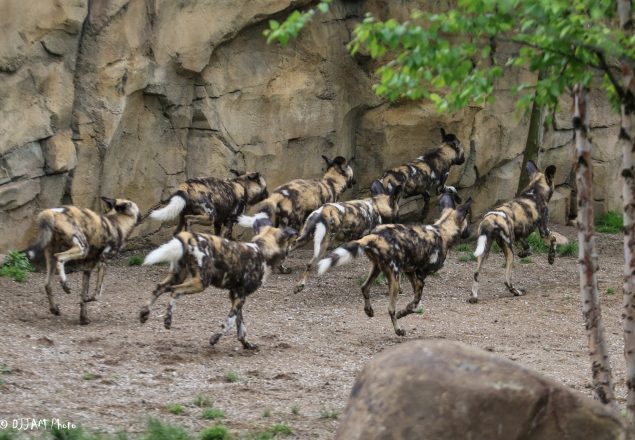 As some of you may have noticed, we have 6 less painted dogs than we had 2 months ago. Due to the loss of Imara, the stability of the pack had decreased. As a result, it meant that some of the juveniles needed to be placed in new homes before their first heat cycle. Generally speaking, females don’t mature until around 22 months of age, but this is not always the case with dogs in zoos. The North American population has seen breeding as early as 11 months. Since this litter is related to all of the adults, we would not want this to happen.

Brie and Ella (short for mozzarella) are now at the Oregon Zoo in Portland where they are slated to get a boyfriend in the near future. Their keepers say the girls have adjusted well and are enjoying their new, lush exhibit and can be rotated through 3 different yards. They will also be part of a training demonstration program that visitors will be able to view.

Colby and Bleu are now part of a trio of ladies at the Potowatomi Zoo in South Bend, Indiana. Their new friend, Kimber, is a well established lady. Kimber lost her mate recently and I am told that our girls have given her a new lease on life. We put the two in with the 9 year old after a few minutes of the dogs having visual access through a barrier. All of the signs were positive so they were put together right away. I keep in touch with their main keeper and she says that having Colby and Bleu has improved Kimber’s disposition.

Lastly, Swiss and Cotija were recently transported to the Knoxville Zoo where we did the same set up as Potowatomi. The girls were given visual access to a very handsome 4 year old male named Puzzle. Again, the dogs appeared to just want to be together and so we opened the yards where they could get acquainted. He seemed to immediately favor Cotija but appeared very happy to have 2 ladies. Puzzle had also lost his mate so we moved our dogs to Knoxville as soon as we could. They were running around together, playing in a pile of hay. It will be interesting to see if Cotija will assume the alpha position over Swiss. When they were here in Cincinnati, they seemed to have close to equal standing within our pack. However, being so young and in a new environment usually makes things go the opposite of what you think or plan for.

The next day, I was sent some videos of them getting bones. Puzzle was hogging them, but letting Cotija get a bite in here and there. This would be a totally new experience for them. They were used to getting everything for themselves. It was also fantastic to see video of the 3 exploring their exhibit which had a lot of grass, big rocks and mature trees. Puzzle was a good host showing them around their new home.

That leaves us with 2 adults, Kwasi (their sire) and Lucy (their ½ sister). Then we have Feta, Queso, Gouda, Nacho and Muenster. All of the remaining dogs are doing well with these changes. Painted dogs are nothing if not very resilient.

Frankly, I think the adults are a little relieved.

Moving forward, our hope is that Lucy will really take charge and assume that alpha female role. Kwasi and her have developed a very tight bond and it is our hope that sometime in the future, these 2 will have a litter of their own.

7 thoughts on “Who Let the Painted Dogs Out?”