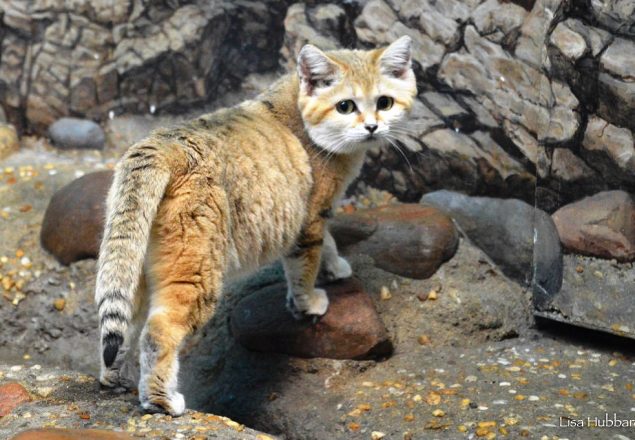 This is a question we hear often from guests observing our sand cats, Najah and Saddie, in our Night Hunters building.  While the sand cat sure does look a lot like a domestic house cat in size and dare I say, cuteness, it is actually a wild felid that hails from the deserts of northern Africa and western and central Asia.

The sand cat is the only truly desert-dwelling felid, and it has some pretty amazing adaptations to survive in its extreme habitat. For example, it can go for long periods of time without drinking water, surviving on the moisture provided by its prey. And fur covering the soles of the sand cat’s feet protects it from the hot sand.

Of the 37 wild cat species found around the world, 28 are small (weighing less than 50 lbs), and scientists at the Zoo’s Center for Conservation and Research of Endangered Wildlife (CREW) work specifically with five of those species, including the sand cat, in its Small Cat Signature Project. The reproductive research conducted with sand cats at CREW provides valuable information to enhancing breeding success and population management in zoos.

The Zoo also supports ecological research and conservation efforts on this rare and relatively understudied species in the field. In 2013, the Sand Cat Sahara Team, led Dr. Alex Sliwa and Grégory Breton, embarked on a self-financed expedition to the Moroccan Sahara. During this first expedition, they identified three sand cats, which encouraged Sliwa and Breton to initiate a pioneering study of the Moroccan Sahara sand cat (Felis margarita margarita).

Each time the research team returns to the Moroccan Sahara, they attempt to microchip and radio collar sand cats, the tracking of which provides valuable information on sand cat habits and ranges. They also attempt to locate sand cats found in previous expeditions, which is a lot easier said than done. In 2016, the team was unable to locate any previously known sand cats, but did collar six new individuals, including a male affectionately referred to as Lucifer. Can you find Lucifer hiding beneath a tuft of grass in the Sahara landscape photo?

We are proud to support the Sand Cat Sahara Team’s efforts to learn more about the important role that these elusive, pint-sized predators play in the Saharan desert ecosystem, and encourage you to follow their work on Facebook.

We, along with Najah and Saddie, thank you for contributing to wildlife conservation through your support of the Cincinnati Zoo!

6 thoughts on “Saving the Small Yet Mighty Sand Cat”