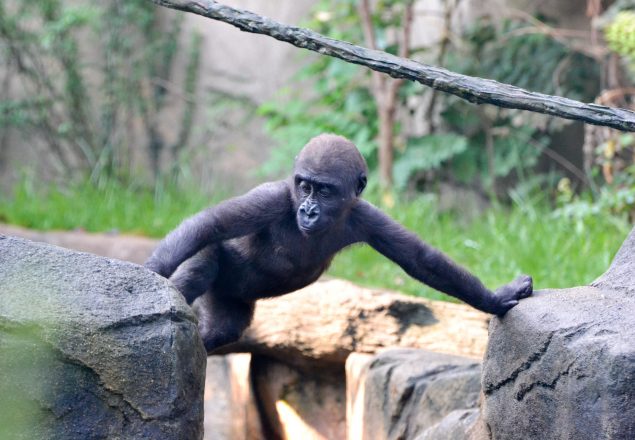 “Susie, King Tut, Penelope, Hatari, Mahari, Samantha, Sam, Timu, Colossus, Jomo, Gladys, Mona and Elle”.  The list of names goes on and on.  For 80 + years, more than 65 western lowland gorillas (Gorilla gorilla gorilla) have resided at the Cincinnati Zoo & Botanical Garden (CZBG) and are a foundation species for our organization. On September 24, 2017, CZBG and conservation organizations around the planet will be celebrating the first World Gorilla Day. CZBG will have a lot of special events and opportunities on that day at the zoo for guests including special giveaways and activities sponsored by our conservation partners at Gorilla Glue and Eco-Cell.  September 24th is significant as it marks the 50th anniversary of the Karisoke Research Center, established by mountain gorilla conservation pioneer, Dian Fossey. Years after her passing, the work continues in Rwanda as does an elaborate interconnected network of gorilla conservation efforts throughout Central Africa, North America and right here in Cincinnati, Ohio to save this critically endangered iconic species.

CZBG’s relationship with gorillas began in the 1930s.  “Susie”, CZBGs first gorilla, arrived to the United States from Europe riding on the Graf Zeppelin and quickly became a guest favorite at the zoo, packing in amazed guests at the old Monkey House. Today we recognize this Historical Landmark building as our current Reptile House.  Susie was billed as the world’s only trained gorilla and would sit at tea tables, eat with utensils and pose for photos wearing various outfits. Back in those days, zoos were more about entertainment than education, conservation, science or organized animal welfare. Although not how we interpret or care for gorillas today, Susie was already showing the awesome power gorillas had to command our attention and inspire introspection and caring.

Flash forward to the 50s and, the less than ideal but typical of the time, Ape House was constructed.  Today, known as the “4-D Theater” where guests go on simulated special effect movie rides, this boxy, barred and blocked building would miraculously become the staging area for the amazing real-life gorilla ride we have been on ever since.  The old Ape House would be home to founder gorillas King Tut, Penelope, Hatari and Mahari. Scores of classic stories emanated from this legendary old zoo building.

None of these stories touched the hearts of the Cincinnati community like the birth of CZBG’s first two gorillas “Sam and Samantha “in 1970. Born about a week apart, Sam to Hatari and Mahari and Samantha to King Tut and Penelope, many thought them to be twins.  Although making progress in gorilla welfare at the time, the old Ape House was still not conducive to mother rearing or family life so CZBG had to hand rear the two newborns to ensure their health.  With no experience raising gorilla infants, help was enlisted from Good Samaritan Hospital.  Hence the names Sam and Samantha.  After several weeks at Good Sam, the babies were returned to the zoo and set up in a special nursery section of the Ape House. Today we regularly hear from many guests who either helped care for them, know somebody who took care of them or were in the hospital as babies themselves at the same time.  It is a story that is still very precious to many.  Sam passed away several years ago at the Knoxville Zoo. Samantha is still residing here at home and is the “Grand Ol’ Lady” of the Cincinnati Zoo. She is the oldest mammal.  She has been a super mother, a grandmother and a great grandmother with her descendants living in over 12 different zoos around the country!

Sam and Samantha were the beginning a gorilla baby boom that filled the Ape House to capacity. New youngsters like Ramses, Kamari, Amani and Rosie were born and growing fast.  Despite sharing many offspring with other zoos around the country, it was clear by the late 70s a new world for the gorillas needed to be added to the zoo. In 1978 CZBG opened one of the very first outdoor naturalistic gorilla habitats anywhere, “Gorilla World”. It was the state of the art gorilla facility and light years ahead of its time. It provided the gorillas with a far more appropriate space and more progressive care opportunities for both the original gorillas from the Ape House and for the long roster of names still to come like Muke, Mlinzi, Madge, Kweli, Babec, Chewie, Mara and Colossus, the largest gorilla ever residing CZBG at over 500lbs! Way too many names to list and stories to share. 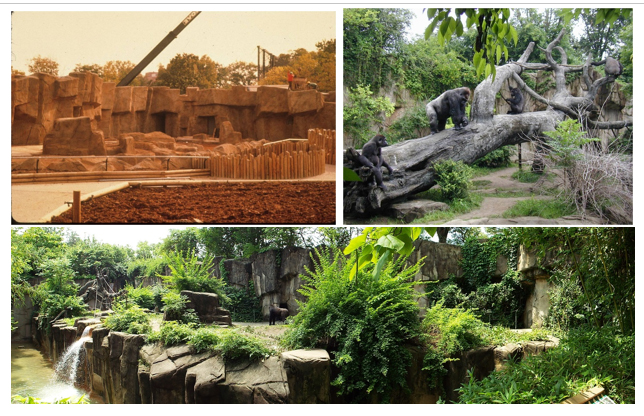 Meeting the needs of great apes like gorillas is involved and challenges one to constantly raise the bar for their care.   In the zoo world, many of the commonly practiced but still critical animal welfare programs were ushered into the zoo world through gorillas and other apes.  Comprehensive environmental enrichment and positive reinforcement operant conditioning programs were established and developed to keep the gorillas happier and healthier.  Gorillas and other species receive daily fun activities, novel foods and mind engaging enrichment items.  Through positive reinforcement training gorillas can be cooperatively shaped for voluntarily medical needs like awake heart exams, fetal ultrasounds, blood pressures, blood draws and hand injections with a syringe, making their health care smoother and less challenging. In the wild gorillas are considered old when they are in their mid-30s.  In zoos gorillas more frequently live into their 40s and 50s these days with ever evolving nutrition, better husbandry, psychological happiness and supportive health behavior training. All very important as zoos have not removed gorillas from the African rainforests for over 45 years.

To also ensure a healthy zoo population, gorillas are cooperatively managed through the Association of Zoos and Aquariums’ (AZA) Species Survival Plan (SSP).  The SSP monitors the genetics, personalities and social needs for over 360 gorillas in North America. Gorillas are not bought and sold or even traded.  All decisions about where a gorilla lives or cohabitates with is based on what’s best for each individual gorilla. Such was the case in 2013 when an orphaned gorilla from Texas was transferred by request of the SSP to CZBG to find a new surrogate mom.  Keepers worked around the clock for three months mimicking mother gorilla behavior while painstakingly tending to the delicate health needs of baby “Gladys”.  At 4 ½ months old she was successfully introduced to her new mom “Mlinzi” and is now 4 ½ years old and thriving in her social group. Because of great teamwork like this and the hard work of the SSP, it is estimated that gorillas can flourish in zoos for over 200 years.

While zoo gorillas thrive their counterparts in the Central African rainforests face uncertain futures.  They area critically endangered species due to over logging, mineral mining, illegal hunting for food and several other issues.  It is estimated we lose nearly 2000 gorillas each year. The good news is there are places like the Cincinnati Zoo that care and are helping.  For over 16 years CZBG has partnered with the Wildlife Conservation Society’s (WCS) Nouabale Ndoki Project (NNP) in the Republic of Congo. This conservation effort includes the Mblei Bai Study, the longest running research being done with wild western lowland gorillas.  Critical demographic information is collected on over 300 different gorillas to better understand their habitat needs as the rainforest around them continue to shrink at an unsustainable pace. Also, part of the NNP is the Mondika study site that researches up close more detailed aspects of gorilla families on a daily basis. Mondika is also an important site for gorilla eco-tourism which is proven to increase their value and subsequent preservation of gorilla populations while creating revenue for local communities and the NNP.  CZBG has contributed about a quarter of a million dollars to this effort as well as expertise, greatly helping with infrastructure development, staff capacity building and general research.  CZBG has also been very involved with NNP education program called “Club Ebobo” by helping to create interpretive opportunities for the local communities based in part on some of the same outreach programs we share with the people of Cincinnati here at the zoo.  In honor of these collaborative gorilla conservation efforts, CZBG named one of our more recent gorilla babies “Mondika” or “Mona” for short. 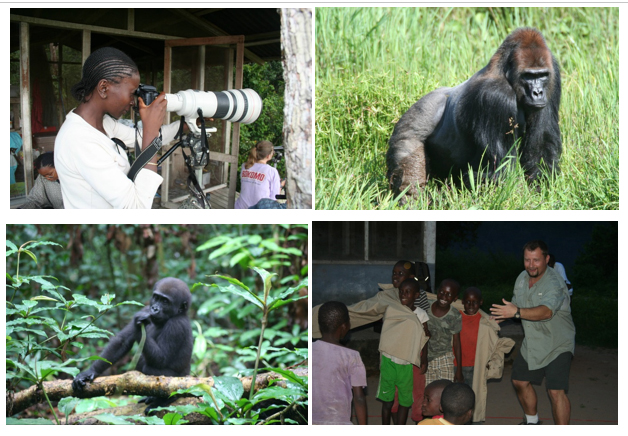 In 2015 CZBG celebrated the birth of the 50th baby born at the zoo named “Elle” (L – Roman numeral for 50) This milestone is representative of a huge investment CZBG has made into the conservation of this iconic species.  Looking forward, CZBG has made the next leap in gorilla facility design with a new expansion of Gorilla World set to open around Thanksgiving of this year. The project will more than double the gorilla space and include a new indoor habitat to complement the existing outdoor area and is larger in usable square footage.  It will be one of the largest indoor gorilla spaces anywhere, providing nose to nose viewing year-round. Through a connected series of transfers the gorillas will be able to move fluidly through five distinct areas including two new complex bedroom sections with overhead chutes and multiple pathways.  Think McDonald’s playland for gorillas! These spaces improve the important health training opportunities even more as well.

Zoo gorillas are ambassadors for not only wild gorillas but the wild in general. They are integrated into our pop culture. They instantly motivate people in special ways. The new Gorilla World will be testament to this while honoring gorillas like Susie, King Tut, Penelope, Colossus, Samantha, Jomo, Mlinzi, Gladys, Mona, Elle and Harambe who demonstrated the incredible power a single gorilla possesses to move people and inspire the world to care.  It will be a bridge to wild gorilla conservation awareness and our dedicated partners in the Congolese rainforests.  It will provide an opportunity for our dedicated guests, friends and followers to expand that appreciation and hopefully help inspire the next little Dian Fossey. 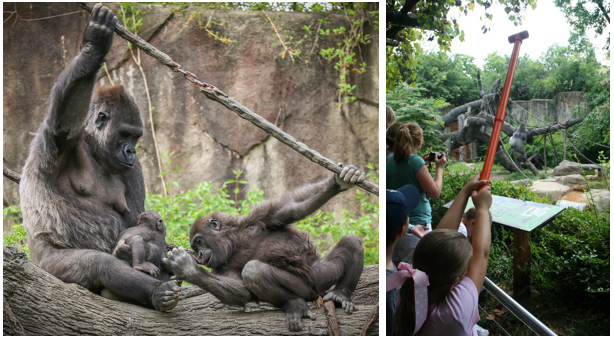 10 thoughts on “World Gorilla Day and the Cincinnati Zoo”