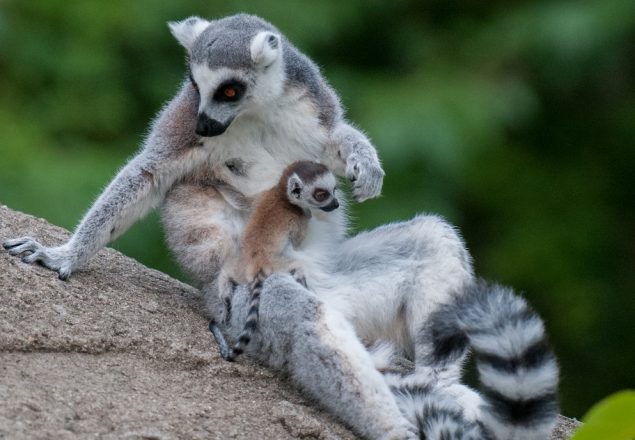 The internet is teeming with “best of” lists. Best new TV shows, best burger joints, best zoos (which includes Cincinnati, of course!). When it comes to the “best places in the biosphere,” Madagascar tops that list, according to one of the world’s most respected naturalists, Edward O. Wilson. That’s tall praise indeed.

Around 25,000 species inhabit Madagascar, and 75% of those are found nowhere else on Earth! Off the southeast coast of Africa, this island nation has been isolated for several million years. Plants and animals there have evolved separately from their continental relatives developing their own unique traits.

Our very own Zoo can provide a glimpse at the diversity of life on Madagascar. In fact, this summer we celebrated the birth of three ring-tailed lemurs, one of Madagascar’s most recognizable species.

Another 101 species and subspecies of lemur also inhabit the island. Around 90% of those are threatened with extinction. They run the gamut of size and color, each suited to a highly specific habitat. Maybe you’ve also seen the Coquerel’s sifakas in Jungle Trails. This endangered lemur is native to northwestern Madagascar, while the ring-tailed lemurs inhabit the south.

Other animals from Madagascar that you can see in our Zoo include:

As diverse and amazing as these creatures are, they represent just a small fraction of Madagascar’s immense variety of fauna. Madagascar is also home to one of the world’s largest species of moth (the moon moth), and unique species of frogs, chameleons, and geckos. There are 115 endemic bird species, too. Unusual plants, like the giant baobab tree, abound as well, providing food and shelter to the animals.

Though a trip to Madagascar may not be in the cards for everyone, a trip to the Zoo to see animals from there can be! And remember, when you support the Zoo you’re benefiting endangered species like the ring-tailed lemur. Our three recent additions represent hope for the species. And their eye-catching good looks and playful behavior make them charismatic spokes-animals for their native home, one of the most biodiverse places on Earth.

2 thoughts on “Get a Glimpse of the Biosphere’s Best: Animals from Madagascar!”