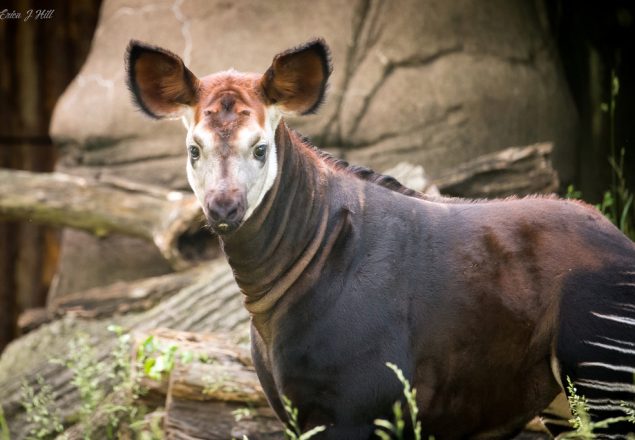 Hello! My name is Kelly Carpenter, and I’m the seasonal keeper at Rhino Reserve. October means it is that special time of year again, and October 18 is my personal favorite holiday, World Okapi Day!

This year, World Okapi Day is particularly exciting for us because earlier this year on February 12, Kiloro, our 10 year old male, and Kuvua, our 9 year old female, had their second calf. A male, the calf is named Moyo, which is Swahili for “to have heart,” and he definitely lives up to his name! He is very energetic, and if you have been to the okapi habitat recently, there is a good chance you have seen him running all over the place.

Moyo was born at a very healthy 64 pounds, and in less than eight months, he has already grown to over 400 pounds. He is not much of a little Zoo baby anymore! One of his favorite treats over the summer was a bucket of ice water, and he also loves interacting with his caregivers.

Always full of energy, Moyo definitely marches to the beat of his own drum. He has his own boisterous personality and lives every day on his terms, including his timeline for getting to know his caregivers. We have always made ourselves available to him for when he was ready to welcome us into his world. It has been a slow and steady, yet exciting, process of getting to know one another.

Moyo has been such an amazing gift to our team and a huge reminder of the importance of okapi conservation and World Okapi Day. Endangered in the wild, the okapi is found in the Democratic Republic of the Congo in Africa. Okapis need a vast amount of healthy, dense rainforest to survive and these rainforests are threatened by mining and deforestation. The Zoo supports the efforts of the Okapi Conservation Project, a dedicated community of individuals working in the Okapi Wildlife Reserve to protect wildlife as well as the lifestyle and culture of its indigenous people through wildlife protection, agroforestry and community assistance.

Our World Okapi Day celebration will take place at the okapi habitat from 10:00 AM to 2:00 PM that day. In addition to collecting cell phones, there will also be a seed-planting activity, a selfie station with fun okapi-themed props, special enrichment provided for the okapi, and fun presentations by our okapi care team. When you stop by, be sure to tag any of your photos or videos with #OkapiConservation and #WorldOkapiDay to show off your okapi pride! Moyo, Kuvua, Kiloro, and I look forward to seeing you there.

If you can’t make it to the Zoo on Wednesday, you can still celebrate with us. If you A.D.O.P.T. an okapi online through the Zoo’s website through October 31, you’ll be entered into a drawing to win a behind-the-scenes tour with the okapis and their caregivers. You’ll have the chance to give the okapis some of their favorite treats and feel their velvet fur. It is not every day that you get to come face-to-face with such a magnificent animal!

One thought on “The Importance of Conservation on World Okapi Day: Okapi That!”