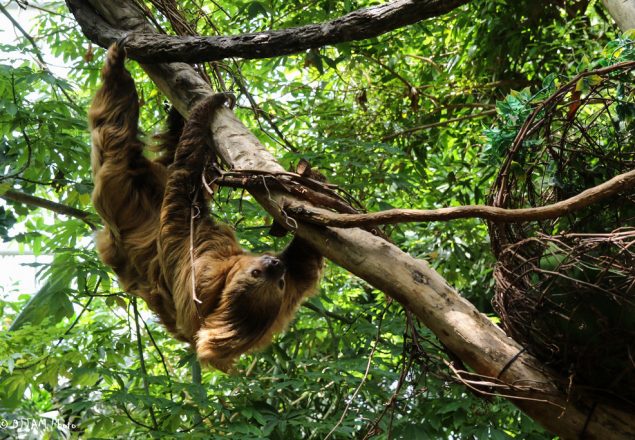 Happy International Sloth Day! What better time is there to check in on what’s new with Moe, Cincinnati’s favorite two-toed sloth? Moe’s habitat in the Discovery Forest has expanded!  His new favorite sleeping spot is in his Ficus tree. If Moe’s curled up under the new leafy sprouts growing at the top of the tree, you may have to look closely to find him.

A great time to visit Moe is during a sloth chat with his caregivers at 3:30pm Wednesday through Sunday.  An even more exciting option is to book a Remarkable Rainforest Behind-the-scenes Experience, where you’ll have a chance to meet Moe and other rainforest animal friends like tamanduas and porcupines up close and in person. A portion of the proceeds from these encounters support sloth conservation in Costa Rica through The Sloth Institute (TSI).

Last month, two of Moe’s caregivers, Amanda Chambers and Colleen Lawrence, traveled to Costa Rica to help out his wild cousins alongside TSI. Established by Sam Trull and Seda Sejud in 2014, the mission of TSI is to enhance and expand both the welfare and conservation of sloths. They work towards this mission by educating people about sloths, researching captive, wild, and recently released sloths, and creating conservation programs that help with issues impacting sloth welfare and habitats.

Increasing tourism and development comes with some challenges to sloths in Costa Rica. While it is great that people are excited to travel and experience the natural world, the large influx of eager travelers into animals’ habitats can take a toll on them if not managed properly.

For example, with development come roads that divide the forest. Sloths often travel along electrical wires to cross roads, making them vulnerable to electrocution.  TSI works with officials to keep trees cut back away from the wires.  However, it isn’t possible to keep all trees trimmed year-round in a rainforest.  We experienced this firsthand late one night when we were called to help rescue a sloth that had climbed out onto a telephone wire and was sleeping dangerously close to a transporter. Thankfully, the sloth was successfully and safely relocated.

TSI tracks and collects data on the sloths they release as well as wild sloths, using radio collars purchased with funds provided from the Zoo to track them. A collar’s charge lasts about six months, and then it is time for the collar to get switched out for a new, fully charged one.  During one of our tracking sessions with a wild three-toed sloth named Dani, her newborn baby fell off her.  TSI was able to reunite Dani and her baby.

Since the last time our team was there, the TSI facility has expanded. There is now a lab where they can draw blood, process data collection, change radio collars, and so on. The lab is in an old shipping container raised off the ground. We witnessed a volunteer vet tech collect and process blood from sloths while we were there.  TSI also collects and tests ticks from the sloths to determine what diseases are being spread to sloths.

It was humbling to experience the other side of sloth conservation. Sam and her team devote so much time and hard work to saving wild animals, which means dealing with all of the challenges of “the wild”. It is much different than working with animals in a more controlled environment like a zoo. To learn more about TSI and the work that they are doing in Costa Rica, be sure to follow them on Facebook! 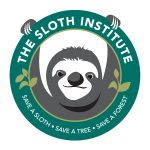 We also encourage all of you craft brewery fans to head on over to Westside Brewing on November 27 from 4:00 to 11:00pm. As one of their Cheers for Charity events, 10% of the sales will go to The Sloth Institute!