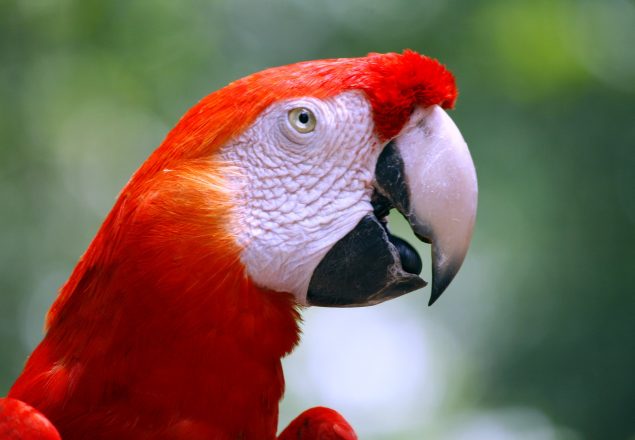 A flock of large, brightly colored birds soaring between trees through a forest in Guatemala, their colors flashing and moving through the air as if they are part of the wind itself. This is the scarlet macaw, the ever-so popular parrot depicted as a pirate’s mate or a friendly pet in movies and stories. What many people don’t realize is that this bright, charismatic bird is an endangered species.

Scarlet macaws face habitat loss and wildfires throughout their range of Guatemala, Mexico, and Belize. Another major threat for this parrot is the illegal pet trade. Because they have such beautiful plumage and are known so well for their mimicking skills, they are highly sought-after as pets. While international trade of scarlet macaws is banned by the Convention on International Trade in Endangered Species (CITES), nest poaching and illegal capture continue.

To help reduce the negative effects of these activities, the Zoo supports the Wildlife Rescue and Conservation Association (ARCAS), a Guatemalan non-profit organization dedicated to the conservation of endangered species and their habitat. The funds contributed by the Zoo support the creation of a scarlet macaw environmental education exhibit at the ARCAS Rescue Center and conservation education materials as well as the release and post-release monitoring of macaws into the wild that were hatched and raised at the Center.

Two years ago, in 2015, ARCAS made history by being the first group to ever release scarlet macaws in Guatemala. They released nine individuals that were captive-bred from birds that had been confiscated from the illegal pet trade. Though bred in captivity, the parrots were raised by their parents and fed wild food to prepare them for their eventual release and decrease their reliance on humans. After the release, five of the macaws were tracked with satellite transmitters to assess their ability to adapt in their new environment. Ten months after the initial release, ACRAS found a 60% survival rate of those they were tracking.

They plan to release another ten individuals in 2018, continuing their work to reinforce the local scarlet macaw population in the Sierra Lacandon National Park. The organization will also work within the community to gain support of the locals, educate residents on the importance of macaws in the natural environment, and convince them that these birds are worth more in the wild for birdwatching rather than bird catching.

While we do not have scarlet macaws on exhibit here at the Cincinnati Zoo, you can always visit Leroy, the blue and gold macaw that lives in Discovery Forest! While he doesn’t look exactly the same, he does have some brilliant plumage and a knack for mimicry much like his scarlet-colored cousins.

So the next time you are here and you see Leroy on his perch, or watch some of our feathered friends flying in the Wings of Wonder show, remember the efforts being taken to help those still in the wild. The Zoo is proud to support ARCAS in their efforts to protect the scarlet macaw, allowing future generations to witness all of the colors of the wind.

7 thoughts on “Protecting the Colors of the Wind: Saving Scarlet Macaws”