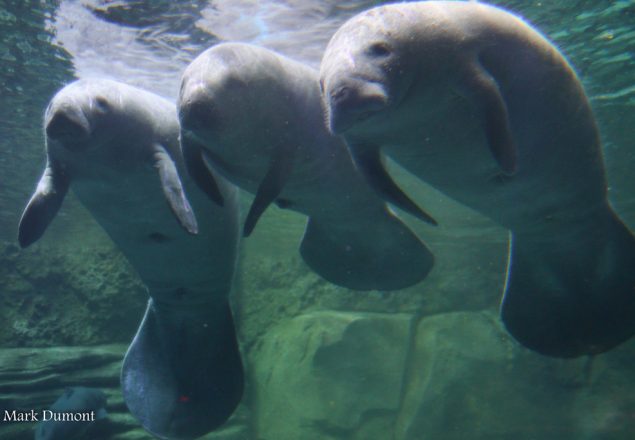 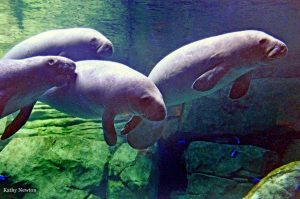 Red Tide has been receiving a lot of publicity lately, and there’s no doubt it is a major problem for wild Florida Manatees; this year 29 red tide-related deaths have been verified and 74 others are suspected. But deaths documented from other causes (e.g., watercraft strike, cold stress, natural causes) are up as well, likely owing to a growing manatee population facing increasing pressures from human activities and environmental challenges.

What is a Florida red tide?
A red tide, or harmful algal bloom, is a higher-than-normal concentration of a microscopic alga (plantlike organism). In Florida and the Gulf of Mexico, the species that causes most red tides is Karenia brevis, often abbreviated as K. brevis. To distinguish K. brevis blooms from red tides caused by other species of algae, researchers in Florida call the former the “Florida red tide.” Many red tides produce toxic chemicals that can affect both marine organisms and humans. The Florida red tide organism, K. brevis, produces brevetoxins that can affect the central nervous system of fish and other vertebrates, causing these animals to die. 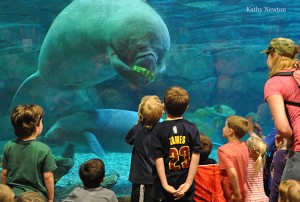 Red Tide has also compromised the Manatee Rescue and Rehabilitation Partnership’s ability to release several Florida Manatees that were rescued in or near areas currently impacted. Click here to see more info from the FWC’s Red Tide FAQ page. 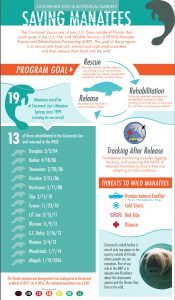 Since 1999 the Cincinnati Zoo & Botanical Garden has participated in the United States Fish and Wildlife Service’s Manatee Rescue & Rehabilitation Partnership (MRP). The goals of the program are to rescue injured or ill manatees and rehabilitate them so that they can be released back into Floridian waters. The Cincinnati Zoo & Botanical Garden has cared for 19 Florida Manatees, 13 of which have been released.

Currently, the Zoo has 4 orphaned manatees rescued from Florida. By caring for these four manatees (Pippen, Matthew, Miles and Daphne) here at Manatee Springs, we are keeping open valuable space at critical care facilities like Sea World Orlando. Having these remarkable animals here also gives each of our more than 1.8 million annual guests an opportunity to learn about one of our most important conservation partnerships. Learn more about Pippen, Matthew, Miles and Daphne here.

According to this Business Insider article, scientists used to release copper sulfate into the water to curb red tides, but they’ve discovered that’s toxic to marine life, too. So researchers are working on more sustainable ways to control algae using clay. But there’s no quick fix yet.