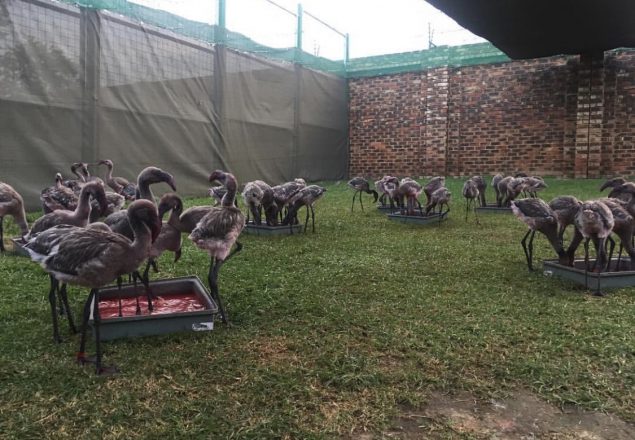 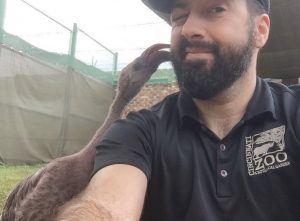 The Kamfers Dam in Kimberley South Africa is home to a large colony of Lesser Flamingo. This February, conditions during breeding season were not optimal, and many adults with small chicks left the breeding site, leaving their own offspring behind. Roughly 2000 chicks were pulled from the site, and a multi-national effort to raise the chicks began.

This past month I had the opportunity to travel to South Africa to assist with the Kimberley Lesser flamingo crisis.  Having worked with our colony of Greater flamingos, primarily with hand rearing chicks, my bird keeper skill set was perfect for the job.

The initial group of ~2000 chicks were split between quite a few South African institutions. Transporting very young birds is a very stressful operation for all involved, and a good amount of those birds did not finish the long journey. I was stationed at Lory Park Zoo, in Midrand, which was around a 6 hour drive from Kimberley. Lory Park was one of the larger groups of birds, with 116. Let me type that out again, 116 flamingo chicks! 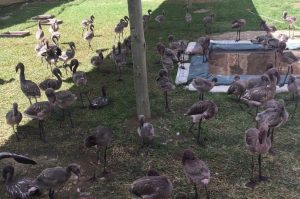 For the first few days, it was quite the shock. Out of the 116 birds, we were tube feeding the majority of them, multiple times a day. At the birds’ age and stage of development, they should have been eating more on their own. After lots of conversations, and lots of husbandry changes, the birds slowly but surely started to do so. By the end of my time there, instead of tube feeding most of the birds, we were down to tube feeding just four. Out of the 116, 28 birds were cleared to head back to the Kamfers Dam. While that number was smaller than what we wanted, it was just the first group. With a deadline of May 15th, I would venture to guess that most of the chicks from Lory Park will be heading back to their natural habitat. 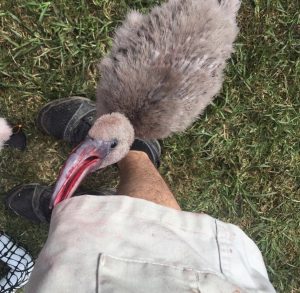 It’s not everyday that we get to become involved directly with animals in their natural habitat. Having the opportunity to do so was a great benefit to me personally, and I am extremely appreciative of that. Thanks to my wonderful coworkers for holding down the bird house fort in my absence, and also thanks to the zoo for the amazing experience.

3 thoughts on “From Cincinnati to South Africa: Answering the Call to Help Save Thousands of Flamingo Chicks”