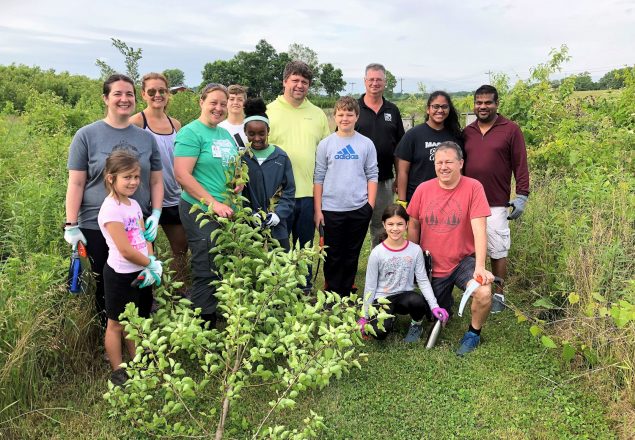 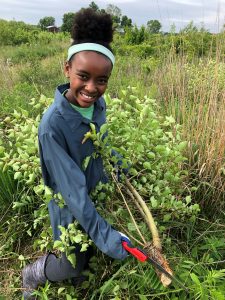 Cutting down trees isn’t the first thing you think of when talking about building a better home for wildlife, but that’s exactly what our Family Community Service volunteers did out at the Zoo’s Bowyer Farm earlier this month.

In 1995, the Zoo was willed a 529-acre farm in Mason, Ohio. Since then Bowyer Farm has grown to more than 600 acres and is connecting with the Zoo’s mission in various ways. One of those goals is to restore native prairie, wetland and woodland habitat to provide an oasis for native wildlife in an otherwise rapidly developing area. 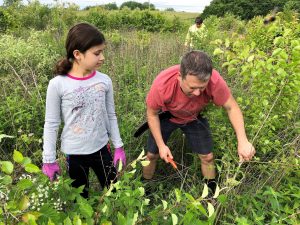 Natural habitat restoration is more complicated than just letting nature take over. Oftentimes, non-native plant and animal species that find their way to a landscape can grow and reproduce quickly in a place where they have no natural checks and balances. These invasive species spread aggressively and push out native species if they are not managed to keep them from taking over.

At Bowyer Farm, ornamental pear trees are a big problem. These popular landscaping trees, commonly called Bradford pears, come from Asia. They have been so successful here—cross-pollinating with other pear species to produce viable seeds—that they are spreading into natural areas.

Pruning saws in hand, volunteers spent a Saturday morning cutting down about 60 of the pear trees growing in the prairie. It was hard work, but so worth it to make space for native plants that wild animals rely on for food and shelter to thrive. 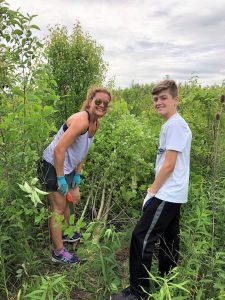 What can you do to build a better home for wildlife in your own yard? Instead of growing ornamental pear trees, consider planting native trees such as Eastern redbud, flowering dogwood or serviceberry that are just as beautiful and support native wildlife.

This invasive species removal event was part of the Association of Zoos & Aquariums’ (AZA) Party for the Planet: Spring into Action campaign. AZA institutions across the nation are engaging communities in making a difference for the environment through this initiative.