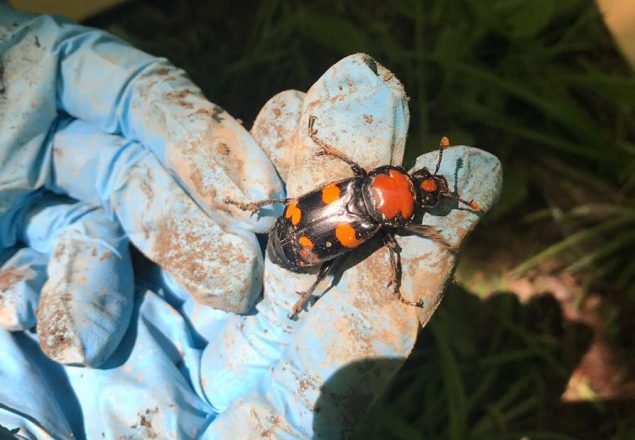 Picture this: it’s a beautiful day. Outside there’s the right amount of sunshine, a quiet breeze, and a big blue sky. Some might think this would be a great day for a picnic. For the Zoo’s Family Community Service group, it was the perfect day to release American burying beetles.

The Zoo’s insect care staff had been preparing for this day for over a year. In partnership with the U.S. Fish & Wildlife Service and Fernald Nature Preserve, the Zoo breeds and cares for American burying beetles behind the scenes with a goal to release them into the wild. This beetle is a critically endangered native species, so it is essential for them to be as healthy as possible when they are released. A special adaptation of this species is their ability to slowly bury a small animal, which a pair will use for food for themselves and their offspring. With the extinction of the passenger pigeon, the American burying beetle lost a significant food source and populations have been declining ever since. Luckily, several conservation groups are committed to the success of this species and there is hope for their future.

Over 20 people gathered on that perfect day in June at the Fernald Nature Preserve to experience this hope first hand. After a training session from Team Leader Mandy Culp and her insect care staff, we took a short hike into the woods to start the release process. First, a small hole for every beetle pair is dug. Then, a food source (rat carcass) is placed inside the hole so the beetles have something to eat and lay eggs on. A breeding pair is then placed into the chamber and covered with dirt. Finally, the holes are marked and covered to increase their chances of survival.

Although there is a strict procedure to adhere to during this process, in reality this shows up as collaboration. Many people worked together to dig into the earth, to gather the supplies, and handle these animals with care. Representatives from several organizations floated around to different groups to support and guide. Even the burying beetles work together to bury their food.

Several weeks later, the insect care staff returned to check on the beetles and found over 100 larvae! And with every perfect day we are one step closer to building a better home for all wildlife.