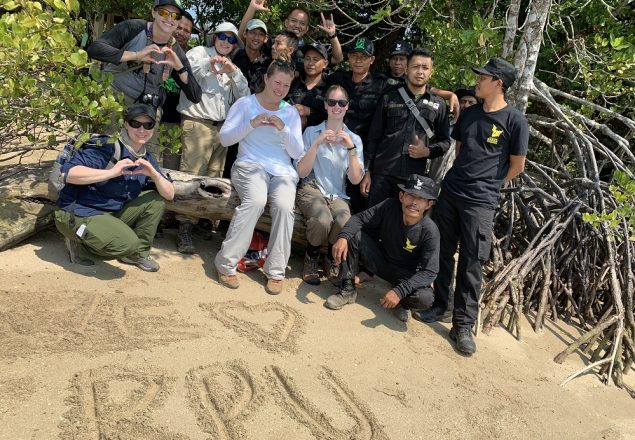 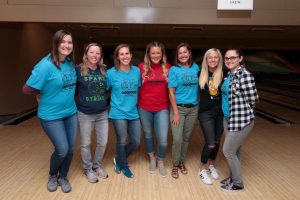 Trip-of-a-lifetime alert! My name is Jenna Wingate, and I am a senior keeper at the Cincinnati Zoo. I was recently awarded a trip to Indonesia for helping the Greater Cincinnati American Association of Zookeepers (AAZK) chapter become the second-highest fundraising chapter for the national Bowling for Rhinos (BFR) event! Our chapter raised just over $25,000 just during BFR, with 100% of it going directly to support rhino populations in the wild. Overall, we donated about $40,000 to conservation in total in 2018.

The American Association of Zoo Keepers is a membership association for animal care professionals to exchange information and network with one another. Its mission is to advance excellence in the animal care profession, foster effective communication beneficial to animal care, support deserving conservation projects, and promote the preservation of our natural resources and animal life.

Bowling for Rhinos is an annual nation-wide event that all chapters donate to or host a fundraiser for. Since AAZK was founded in 1967, over 7 million dollars has been raised through Bowling for Rhino events! BFR supports the International Rhino Foundation, Lewa Wildlife Conservancy, and a small percentage of the funds go to Action for Cheetahs in Kenya – which shares a portion of land with Lewa Wildlife Conservancy.

Each year the top four fundraisers receive a trip to visit either Lewa Wildlife Conservancy in Africa or a trip to Indonesia with the International Rhino Foundation. I chose to go to Indonesia because of the Cincinnati Zoo’s history with the Sumatran Rhino Sanctuary. I also know that all five species of rhino are endangered or critically endangered, and two species found in Indonesia (Javan and Sumatran rhinos) could be functionally extinct in the next decade, so I couldn’t pass it up!

The Cincinnati Zoo and its dedicated scientists of CREW, led by Dr. Terri Roth, were able to figure out the ins and outs of the Sumatran rhino reproductive system and this allowed for the resident couple, Emi and Ipuh to produce three healthy babies! Andalas, Harapan and Suci. Andalas and Harapan currently live at the Sumatran Rhino Sanctuary (SRS) where they have an incredibly important role to save their species. Andalas has done his part already by producing two calves, Andatu (read an exciting update on him here) and Delilah, since living at the sanctuary. Learn more about what the Zoo is doing to save Sumatran rhinos by clicking here.

During my trip to Indonesia, I had the opportunity to see rhinos and witness the work being done by Rhino Protection Units (RPU). The funds raised through our BFR events are used to pay the salaries of the RPUs, so they are very thankful to the “bowlers” that come to visit. They treated us like kings and queens as we island hopped around Indonesia. 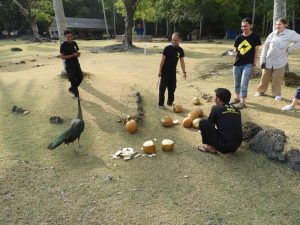 They were always willing to give us a hand while hiking through the National Parks, carried dozens of water bottles for us, cooked extravagant meals-including fresh-caught lobster, got out and pushed our boat when it got stuck in a low tide, carried our luggage on and off boats, climbed 50 foot coconut trees to spoil us with fresh coconut water, drove us hours on bumpy roads and inspired us all along the way. These guys are my heroes!! 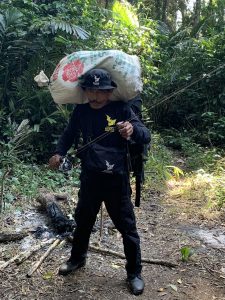 RPUs were established 24 years ago with a mission to patrol and protect the wildlife that can be found in three different national parks of Indonesia. RPUs are made up of four-man teams that dedicate their lives to protecting Javan and Sumatran rhinos. They spend 15 days working in the jungle, carrying 40-50-pound backpacks, sleeping on the ground where tigers, elephants and terrestrial leeches (!) roam, drinking boiled water from puddles or streams they come across and having limited contact with their loved ones. When one team is done with their 15-day-shift, another team begins their shift.

While patrolling, the units are constantly on the lookout for poachers, snares, encroaching villages and of course, signs of rhinos! If they come across a poacher, they have the authority to arrest them. They collect deadly snares and remove them making the jungles safer for ALL wildlife that lives there including tapirs, tigers, endangered deer, bees and elephants. They also photograph, measure, and record the location of any and all rhino signs they see like footprints, wallows, dung, and urine. Because there are roughly 68 Javan rhinos and fewer than 80 Sumatran rhinos left in the whole world, it is a very rare occasion for these men to come across a rhino, yet they continue to dedicate their lives to protecting them.

Seeing these rhinos and the RPUs, while one of the best parts of the entire experience, felt very heavy to me. During a special moment with male rhino Harapan, a rhino that I was lucky to know when he lived in Cincinnati, I decided to make a larger and more focused effort to save rhinos from extinction. Will you join me?

Like others, I want to help, but don’t know where to get started. For now, I have a few easy ways that you can help:

More on my Journey to Indonesia

We began our journey by exploring Jakarta and the National Museum of Indonesia. After a long drive from Jakarta we got on the boat and spent three days at our own private island called Handeleum Island where we were able to watch long-tailed macaques, barking deer, monitor lizards and our friend Gotik, the rescued peacock, from our porch each evening. During the days we hopped on a boat and took a short trip to the island of Java where we visited Ujung Kulon National Park with a few teams of RPU’s. There are five teams total that protect Ujung Kulon and there hasn’t been a single Javan rhino poached since the establishment of the Rhino Protection Units here! This is the only place in the entire world where the 68 remaining Javan rhinos live. One of the biggest issues for the rhinos living here is the Arenga Palm, this is a native plant that grows quickly and keeps rhino food plants from growing as well. When IRF’s Program Coordinator, rhino conservationist and overall one of the coolest people I have ever met, Sectionov Inov, did a project to clear 78 hectares of this Arenga Palm, nine new Javan rhinos moved into the area. The population is stable and reproducing, but its habitat is on the verge of being at carrying capacity for the population, more money is needed to clear more Arenga Palm and a second population site is needed in order to ensure this species exists because one large volcano eruption, tsunami, or fast-spreading disease could take out the entire Javan rhino population. 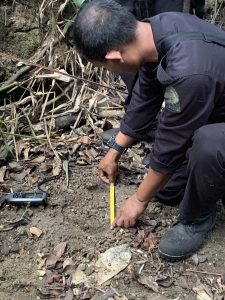 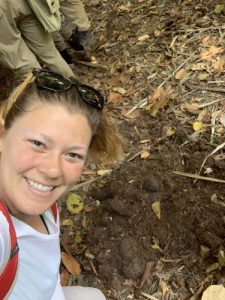 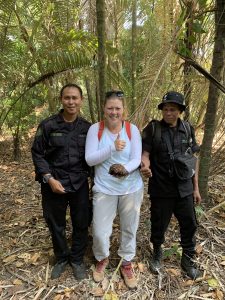 Ujung Kulon National Park is on the coast and beyond beautiful! We were SO lucky and came across Javan rhino dung, urine spray on a tree that hadn’t dried yet, a rhino bed, mud-covered plants 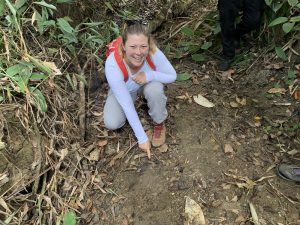 from a recently wallowing rhino walking through them, a recently used wallow and a few footprints!! It was incredible, we saw everything but the rhino!! When we came across the footprints the RPU’s immediately began measuring it and recording all of the necessary data. This was easily one of the best experiences of my life. Spending time with the RPU teams and seeing the work they do was amazing and inspiring, and also very fun. The teams we got to hike with were there on their off days (because rhinos need constant protection-the teams on duty couldn’t take the day off of course). This allowed them to spend time with some of the men from other units that they don’t see often and to relax a bit even though they were catering to us the whole time. These grown men were almost constantly giggling when not leading us around the forest and having the time of their lives catching up with buddies and getting to sort of take it easy a bit in the jungle while taking us on the “tourist” hikes that were like a stroll in the park to them. We ended our three days in Java with a giant fire and dance party, apparently the first dance party to ever take place on a BFR trip.

Next, we flew to southern Sumatra and went to Bukit Barisan Selatan National Park (BBS). We only spent one night and one day here, but I truly loved it. BBS is very large and hilly, with a huge issue of over 228 villages encroaching in on it, cutting down forests and causing more human-wildlife conflict and access for poachers. A major road dissects it and keeps Sumatran rhinos from coming in contact with one another, squashing the chance for baby Sumatran rhinos to be added to the population. One of the other issues is a vine that also causes issues for Sumatran rhino food plants to grow. 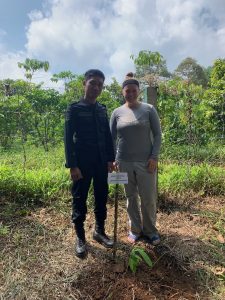 BBS is home to the world’s largest flower, which is also endangered, called the Rafflesia flower. It only blooms for one week a year and we got to see two of them! Here we were introduced to leeches that live on land, and we kept the RPU’s busy with our shrieks of request for someone to remove the leeches as they crept up our boots. We did a night hike in the jungle and had a lobster dinner! They shared a presentation about the work they do and trust me when I say they are saving way more species than just rhinos! We found two millipedes that were the size of my head and saw a demonstration on how they collect molds of rhino footprints found in the wild. My favorite part of this visit was getting to plant a tree in “Bowlers Alley”. In 2008 one hectare was set aside near the RPU base camp specifically for a special grove of trees to be planted to help offset carbon emissions and each year the group of BFR trip winners gets to plant a tree with their name next to it. It feels really special to have been able to plant a tree all the way across the world in Sumatra and just have a small part in reforesting the area. 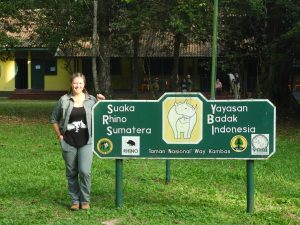 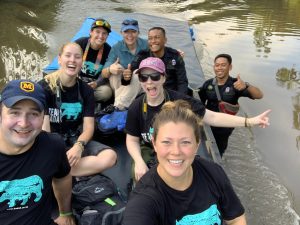 Our final destination was Way Kambas National Park, home of the Sumatran Rhino Sanctuary. We had the pleasure of staying here another three days. We woke up to the sound of Siamang gibbons each morning and even saw them a couple of times. We went on a river cruise and saw a giant crocodile, monkeys, and birds. The RPU’s here set up some snares for us to try and find in a safe, monitored way and showed us how the snares work and do so much damage to wildlife. Also, during this time at the Sumatran Rhino Sanctuary, we were able to visit with the heavily protected and fantastically cared for Sumatran rhinos. Two of which I mentioned earlier were born here at the world-famous, Cincinnati Zoo!  The Sumatran Rhino Sanctuary is one of the last hopes for keeping the species alive. They have world-class vets and rhino keepers who spend their entire day following these rhinos around in the natural forest as they eat, wallow and explore. Each morning they receive fruits, browse, and a bath with a full-body tick check. They are really living the good life! Their keepers know them so well and care about them deeply.

Thank you for following along my journey to Indonesia! I hope to see you at Bowling for Rhinos!

6 thoughts on “Trip of a Lifetime Doubles Determination to Save Rhinos!”