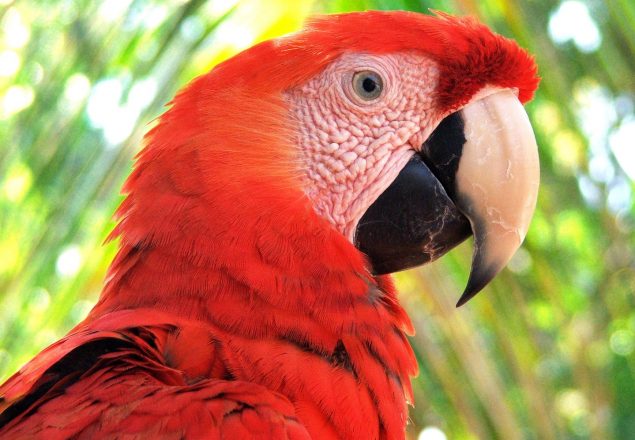 Here at the Cincinnati Zoo & Botanical Garden, we are committed to the highest standards of animal welfare, what we define as Animal Excellence. To us, this means that every animal 1) is healthy, with their nutritional, physical, and physiological needs met, 2) has the opportunity for meaningful choice and control, 3) can develop positive relationships with animal care staff, 4) has the ability to perform species-specific behaviors, and 5) is provided an environment that promotes these behaviors. Animals can experience a variety of environments throughout their lifetime, such as a novel enrichment features or a new habitat. In our mission to pursue Animal Excellence, we aim to monitor animals that undergoes a change in their surroundings to ensure they adjust well to their new home.

The Animal Excellence team has been conducting observations on our two scarlet macaws, Geronimo and Mickey. Both birds were introduced to an upgraded aviary located in Jungle Trails this past May. Previously, the scarlet macaws were kept in an indoor holding aviary behind the scenes in the Wings of the World. Now during the warmer months, Geronimo and Mickey have a much more complex environment, with the opportunity to interact with various types or perching, substrates and enrichment. They also can engage with an entirely new species, two helmeted curassows that also share the same enclosure. This change is in alignment with our More Home To Roam campaign that seeks to give our animals more complex, dynamic, and larger homes here at the Cincinnati Zoo & Botanical Garden.

To understand how they are utilizing their updated area, what behaviors are comprising the birds’ daily activity budget, and to assess their overall well-being, behavioral observations were implemented on the birds. The goal of this investigation was to see if there was an overall difference in activity and interaction compared to the time they spend indoors. We developed an ethogram to examine the behaviors of birds and created a map of the habitat to monitor their space usage. Because feather condition can be a visual indicator of the health of a bird, scores on feather condition for Geronimo and Mickey were also taken by staff during the time they were outside. The higher the score, the overall better feather condition.

Throughout the summer, we noted the feather condition to gradually improve for male scarlet macaw Geronimo and then to remain consistently high for both birds. Both macaws were also observed engaging in a wide range of behaviors in their outdoor habitat, spending a significant amount of time manipulating objects, and feeding/drinking in multiple ways and areas. The macaws were also seen exploring a majority of their new space. They spent most of their time along the perches, ropes, and trees in the new space. Geronimo was also readily seen taking flight from perch to perch!

Overall, the scarlet macaws are flourishing in their updated outdoor habitat. Our team will continue to monitor the macaws as they transition back indoors for the winter. Until then, make sure you stop by and see them in their new habitat in Jungle Trails.

Not only does the zoo strive for the well-being of scarlet macaws in our care, but furthermore supports the conservation of these birds in Guatemala through the Wildlife Rescue and Conservation Centre (ARCAS). ARCAS is a collaborative organization that works to secure the survival of the species in the Mayan Biosphere Reserve through rescue and rehabilitation of scarlet macaws. ARCAS is also involved in breeding scarlet macaws, with the goal of reintroducing them to the wild. Back in 2015, ARCAS officially announced the first ever release of endangered scarlet macaws in Guatemala and are continuously monitoring the success of the individuals through satellite transmitters.