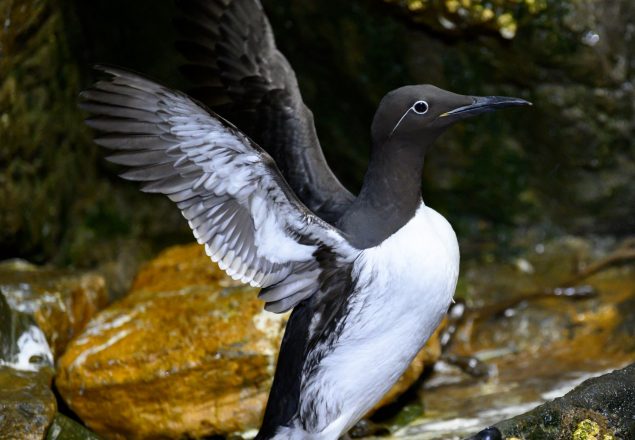 “The Blob” may not sound very intimidating, but to seabirds like the common murre and other animals that depend on the ocean, the threat couldn’t be more potent. Ocean ecosystems exist in a delicate balance, and when something disrupts that balance, the impacts can ripple throughout the food web. This is what happened between 2014 and 2016, when the hottest marine heatwave on record (“the blob”) happened around a massive volume of water in the northeast Pacific Ocean. The heatwave led to less phytoplankton in the ocean, which forage fish like anchovies consume, while increasing the metabolisms of forage fish. All of this resulted in less and lower quality forage fish, which common murres depend on. The heatwave also increased the metabolisms of predatory fish like Pacific cod, which compete with the common murre for food. Thus, between 2015 and 2016, tens of thousands of common murres washed ashore, having succumbed to starvation. Since only a fraction of the birds that die appear on shorelines, significantly more – up to one million – are thought to have perished.

Common murre at the Zoo
Here at the Zoo, we have 11 common murres in our Arctic Islands and Arctic Cliffs habitats in Wings of the World, and they range in age from five to 22 years old. This highly social bird is an expert swimmer, diving to more than 150 ft below surface in search of forage fish. When it’s time to breed, common murres will lay just one egg on the ledge of a cliff.

Why was this marine heatwave so intense?
As a result of climate change, heatwaves like “the blob” are becoming more frequent, more intense, and longer-lasting. When fossil fuels like coal, oil, and natural gas are burned for energy, they emit large amounts of CO2 and other greenhouse gases into the atmosphere. These gases act like a heat-trapping blanket that surrounds the earth. Regular levels of CO2 are normal and important for maintaining life, but rampant levels of CO2, like what we’ve seen over the past few decades, can lead to a number of negative impacts, including a substantial increase in extreme heat events, longer droughts, more flooding, and more severe marine heatwaves like the one from 2014 to 2016.

What the Zoo is doing to combat climate change

Here at the Cincinnati Zoo, we believe in managing our resources responsibly and taking practical steps to reduce our carbon footprint. For example, in 2011, the Zoo installed a 1.56MW solar array with 6,400 panels above the Vine Street Parking Lot. This array powers 30% of the Zoo’s current energy needs and on exceptionally sunny and cool days, generates over 100% of the Zoo’s energy needs. The Zoo also saves energy by switching out older, inefficient appliances with newer, more energy-efficient ones and using energy management software when heating and cooling our buildings.

What you can do
Everyone has the power to protect the Earth for future generations. Join the Zoo and the millions of other institutions and individuals that are taking action to fight climate change!