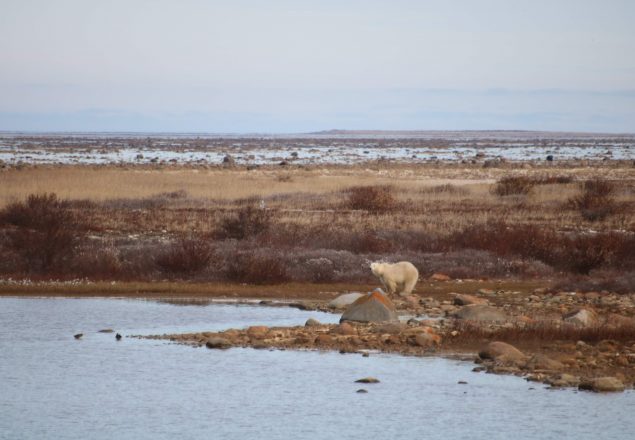 Nearly 6 months ago, Jerran Orwig and I were stepping off a plane in chilly Churchill, Manitoba, about to embark on a journey to learn about the habitat and community conservation efforts that surround polar bear conservation and research. We were there as part of a leadership workshop put on by Polar Bears International (PBI) and the National Network for Ocean and Climate Change Interpretation (NNOCCI) in the hopes of gaining information that could be shared with our communities back home and to witness, first-hand, the impacts that climate change was having on this fragile ecosystem. Churchill, Manitoba is known as the polar bear capital of the world. This is because, around late October/early November, the Hudson Bay begins to freeze and it freezes earliest around Cape Churchill, moving north along the coast. A frozen bay means that polar bears can get out on the ice and begin hunting.

When we arrived at the end of September, donned our PBI parkas, and set out to learn about all things polar bear, the Hudson Bay had not yet frozen over. This meant that the bears we were seeking out had been without sea ice for about 100 days. Unlike other mammals that walk on land, polar bears’ lives are inextricably tied to sea ice. No sea ice means that they are forced to live off of fat reserves and opportunistically available (but less nutritionally optimal) food sources such as vegetation, berries, geese, and eggs until they can return to the ice for their primary food source – seals. Polar bears are adapted for these leaner months, however the sea ice has been arriving three to six days later per decade and breaking up earlier (at roughly the same per decade rate) since 1979. This increase in ice-free days means that polar bears living today are faced with fasting periods that are weeks longer than before. This increased fasting has impacts on polar bear reproduction, incidents of human-wildlife conflict (for example, a week after we left Churchill, a hungry polar bear wandered into town) and individual survival. So, there Jerran and I sat, binoculars glued to our eyes, bouncing along the shores of the Hudson Bay in a tundra buggy, scanning the landscape for polar bears. From lichens and arctic hares to ptarmigans and a lone red fox, each day, we saw amazing, tough, tenacious flora and fauna…but no polar bears. We also met the local people and learned about how their livelihoods are linked to the land, the seasonal freeze and thaw of the bay, and the arrival of the polar bear. Finally, on one of our final days in Churchill, after many false alarms, we saw her….

My heart skipped a beat, then sped up. I forgot to breathe. Words failed me. Even if they had not, no words could accurately describe what it feels like to see a polar bear in the wild. I feel fortunate to have had this experience at a time when the polar bears’ habitat is at a critical crossroads. Yesterday was International Polar Bear Day and many of us had an opportunity to celebrate these amazing arctic ambassador animals and to reflect on our own relationship with our planet. In order to ensure that polar bears will be around for future generations, we must take steps now to protect and preserve the habitat upon which they depend.  The biggest way we can do that is to take action on climate change. Our atmosphere is like a blanket surrounding our earth and when we burn fossil fuels such as coal, oil, and natural gas for energy, we release carbon dioxide into the atmosphere which adds to this blanket effect, thickening it, trapping heat around our world, and disrupting our climate.  As we learned and saw firsthand in Churchill, our warming climate trend directly impacts the amount of and seasonality of the polar bears’ critical sea ice habitat. The good news is that there are things we can do to help. By working as a community, we can make real progress on the challenges that polar bears and humans are facing from our changing climate. By remembering that we are all connected and being responsible with our energy choices and natural resources now, we can ensure that the habitats upon which polar bears and humans depend will be around for future generations. For ideas on how the Zoo is helping in this effort and to join us in being part of the solution, check out this link.