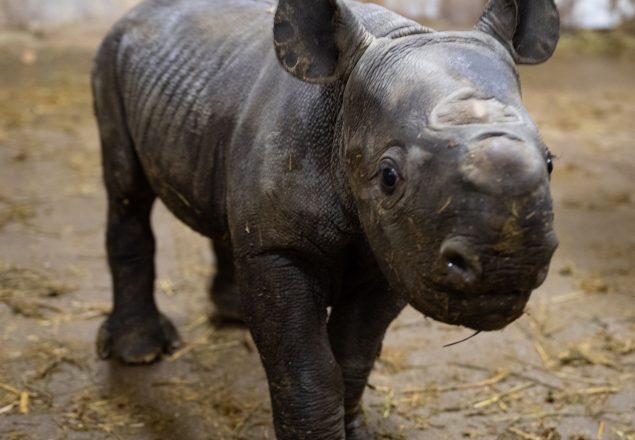 Special delivery! We are so excited to have another rhino calf! Not only because they are absolutely adorable, but reproduction is critical for their species survival. Seyia gave birth to a healthy calf on Friday, August 21. The long gestation period for this critically endangered species makes it difficult to grow the population, so this second calf for Seyia and dad Faru is a very big deal! He is the first black rhino born in 2020 in the Association of Zoos and Aquariums’ (AZA) zoos and there have been only 8 born since 2017, so his birth is very important.

A gestation period for a rhino is 16 months and there was a lot to do to prep for the arrival of this baby! We had to “baby-proof” everything including their indoor bedrooms and also the outdoor habitat. Seyia was also on 24 hour birth watch which is when we put even more bedding down since we knew she was getting close.

Her calf is adorable and perfect. He is spunky and driving his mother crazy, trying to spar with her when she wants to rest!  Seyia’s water broke on Friday, August 21 at 4:45pm and she had the baby less than two hours later at 6:38pm. He was standing by 7:04pm and walking by 7:45pm! This bundle of energy is unlike Kendi, her first calf, who slept the majority of the time after he was born. This baby is super active!

He and his Momma are bonding behind the scenes for now and this gives the baby time to get better footing and coordination to take on the outdoor habitat terrain. Once he ventures outside with mom, they will have access both in and outside for quite a while so hopefully, guests will get a peek at him! Black rhino moms are very protective and territorial, so giving them access in and outside allows her to take her time to get comfortable with bringing him out there and helps the calf slowly enter into this big new world at his own pace.

In 2015, the Association of Zoos and Aquariums’ (AZA) Species Survival Plan (SSP), the body that manages populations in Zoos, determined that parents Faru and Seyia were a good genetic match and recommended that they breed.  Faru came to Cincinnati from Atlanta in the summer of 2015 and was introduced to Seyia. They had their first calf, Kendi, in 2017. In a move recommended by the SSP, Kendi now calls the San Diego Zoo Safari Park home where he will do his part to save his critically endangered species! 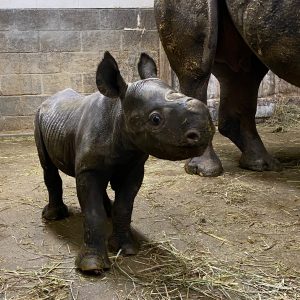 Eastern black rhinos, native to Eastern and Central Africa, have two large horns made of keratin that they use for defense, intimidation, and feeding. An adult can weigh anywhere between 1,760 and 3,080 pounds, and newborns (calves) weigh between 73 – 121 pounds. The species is Critically Endangered due to poaching and habitat loss.  Fewer than 5,000 black rhinos remain in the world, and approximately 60 are managed by the SSP in 25 North American Zoos.

The public may be able to catch a glimpse of the new baby and Seyia in their outdoor habitat in a couple of weeks, weather and health depending.  Dad, Faru, will have access outside daily. Black rhinos are solitary animals, so there are no plans to unite the three. Look for updates on the calf’s progress on CincinnatiZoo.org and on Facebook, Instagram and Twitter. 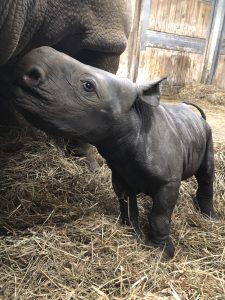 Rhino Baby Shower – Each baby shower gift comes with a chance to name and meet him!

To raise funds for the care and feeding of mom, Seyia, and baby, the Zoo is throwing them a virtual baby shower! Each $100 shower gift comes with a chance to name the baby, meet the rhinos, and get a Rhino Rembrandt painting!

A $100 shower gift covers the cost of all the orchard grass, alfalfa hay, apples, bananas, sweet potatoes, apple and oat biscuits, and Vitamin E that a rhino could eat in a week! So, each contribution makes a big difference in addition to making the supporter eligible to meet mom and baby rhino behind the scenes with three other friends or family members! It’s a great opportunity for co-workers, students, or friends to split the cost of a gift and share the tour and naming rights if they win!

Click here to purchase a shower gift get a chance to name the baby!  Shower gifts may be purchased now through September 27 to give Virtual Zoofari attendees the chance to be included in the fun.  Additional information and a shower invitation will be sent to all who give a shower gift. The winning name will be announced during a virtual baby shower on October 1.