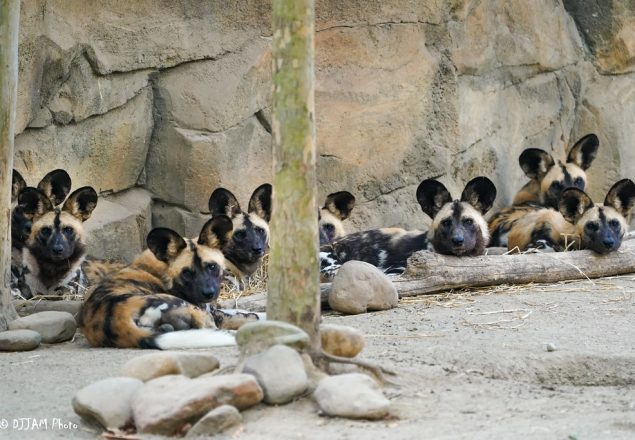 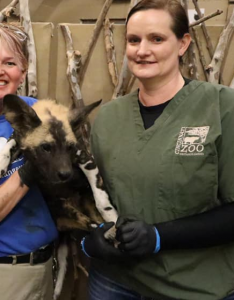 It’s been a long time since I have done an update on the Painted Dogs in Painted Dog Valley (presented by US Bank). In 2019, the Cincinnati Zoo adopted ten painted dog pups and their mother! All in all, not much has changed. The kids will be 2 years old in November and they have settled into a nice group of 8!

In July, we transported 3 of the young females (Rosie, Charlie, and Ada) to the Utica Zoo in New York. The Utica Zoo was opening a new painted dog habitat and because females in the wild usually leave their pack first, it only made sense to send 3 girls. I chose Rosie, Charlie, and Ada specifically because of personality, ranking in their pack here and the relationships between the females. I also felt Raina and Lala would be the best fit for our pack at the Cincinnati Zoo. They would be less inclined to challenge Akili and cause issues with the social structure. Right away they seemed to really like their habitat and were really comfortable in the new space. Out of all of the many, many dog moves I have done, this was probably the best one ever. The girls did a great job of going into their separate crates, stayed calm the entire almost 10-hour drive, and unloaded quickly and safely. They showed almost no stress (at least to the human eye) being separated from the others and spent hours exploring their new home. I was fortunate enough to stay a couple of days to help the dogs adjust and give the keepers a crash course in painted dog husbandry. All appeared well when I left and I have heard that the keepers really enjoy working with them.

The pack that remains also appeared to be fine with the changes in the group. I didn’t see much of a reaction from the others at all.

Akili, our mama dog, is still in charge when she needs to be. The young males don’t bother her too much so she only has to contend with her 2 daughters, Lala and Raina. The young females are well behaved for the most part, but like most young female dogs, can be little stinkers when they don’t get their way or something that they want. For now, Akili is doing a great job of keeping them in line. Akili, who is our original female’s sister (Imara, from a different litter, but same parents), is a somewhat nervous dog but is very food motivated and trains like a champ. 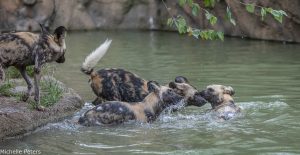 Since Akili is a single parent, we don’t have a true alpha pair. Essentially she is still an alpha female, but only because she is their mother. Generally, she stays out of the scuffles with the pups. You will often see her just observing what is going on.

That leaves us with 7 juveniles. 2 girls and 5 boys. The kids (even though they are not technically pups anymore) as I usually refer to them, have their own rankings.

Lala and Raina seem to be fluid and not really have a distinct dominant dog. Raina, who has very similar markings to her mother, is usually laying with Akili or her sister. Lala on the other hand is somewhat of a tomboy. She likes spending time with her brothers, roughhousing and boxing.

Duke, our dominant male, does a great job of keeping the boys in line. He is thoughtful, observant and will intervene when necessary. He’s a pretty vocal dog especially if he doesn’t like something.

Tico, one of the middle dogs, has really unique markings. He has a white ring that goes all the way around the base of his tail. In my opinion, he is the most personable of the dogs and will often come to see what I am doing, usually by himself.

Another middle dog, Stephen, is a very handsome boy who also likes to know what is going on.

Imani, (yes, the same name as our female lion, he came in with this name) loves to train but also to cause trouble. During training sessions, he likes to pull on his siblings’ tails which can make things difficult and annoy the other dogs (and myself frankly).

Koda, our low male, is the most unique looking of the boys. He kind of looks like a bear with a fuzzy collar around his neck and lots of black and white markings on his shoulders.

This group of dogs has progressed very slowly with their training, but have done an excellent job. We are able to give their vaccinations or injectable drugs voluntarily. Basically, as long as you have food, they will do whatever you ask! They’re even able to help their wild counterparts! We were able to collect blood on 7 of the dogs through a vein on the outside of their rear leg for a researcher in Africa to help gather information concerning the Distemper vaccine. Lastly, we continue to participate in a fecal study that monitors hormone levels in both females and males. This information is especially important so that we can manage the dog population in an appropriate manner.

It’s comforting to know that even with all of the craziness that is happening in the world, the dogs still act like dogs. We can always count on them to remind us how significant the bigger issues like conservation are important to all of us at the Cincinnati Zoo.