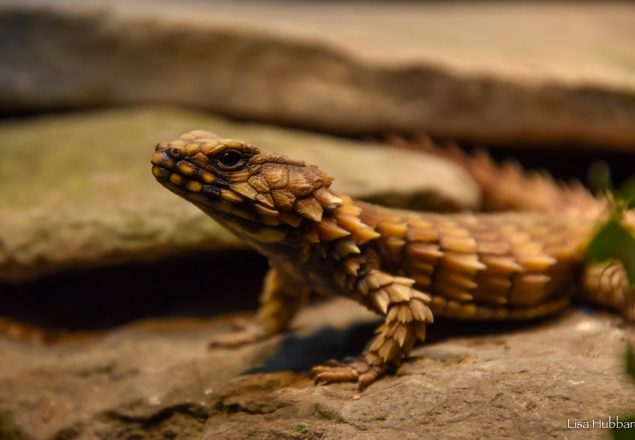 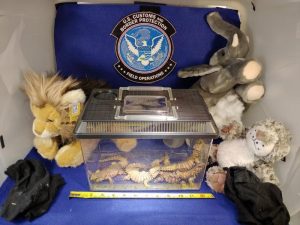 The armadillo lizard might look more like a Pokémon character than a lizard at the Cincinnati Zoo! The species from South Africa is known for their distinct natural “armor” that helps it survive in the wild. When danger is near, the armadillo lizard will turn into a ball by rolling on its back and taking its tail in its mouth. Their boney, hard scales on their head and tail offer them protection until the threat disappears. Protected by hard, bony scales and spines on the head and tail, the armadillo lizard remains in this position until the danger disappears.

Unfortunately, one of the biggest threats to this species is the illegal wildlife trade. In November 2019, Cincinnati Customs and Border Patrol (CBP) officers and specialists held a shipment coming from South Africa and destined to South Florida. The package was manifested as “toy animals, t-shirts, and markers” and contained an assortment of stuffed animals. While reviewing x-ray images of the shipment, officers and agriculture specialists noticed the stuffed animals contained distinct shapes of what appeared to be five live animals. When CBP agriculture specialists began opening the toys, the lizards’ tails and legs emerged, and they appeared to be moving. 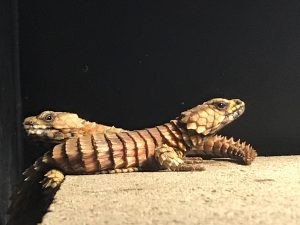 That’s when the Cincinnati Zoo stepped in and agreed to provide animal care for the lizards, and the shipment was referred to FWS special agents for further investigation. Our Herpetology Department was happy to answer the call and offer these animals a home where they will be well cared for. Despite the awful shipping conditions of these smuggled lizards, all are thriving in their new behind-the-scenes habitat, eating, gaining weight, and looking great!

This species bears live young, no eggs involved! They give birth at most, once per year and up to 2 offspring per birth! However, it is far more common that this species gives birth to one animal every other year. They are born as miniatures of the adults and are immediately ready to hunt. You can see one young armadillo lizard in their habitat that was born here in March of 2020. The young armadillo lizard has been accepted by the colony and is thriving with the group! In the wild, this species typically lives in colonies that can include over a hundred individual lizards!

Check-in with them during our Home Safari here:

And make sure to visit these unique and thriving lizards at the Dragons! habitat on your next Zoo adventure!