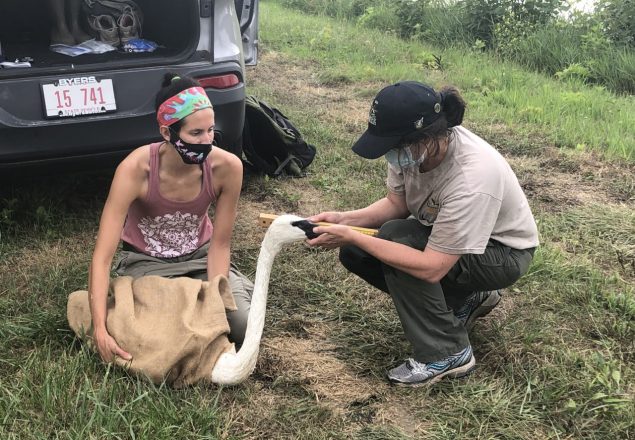 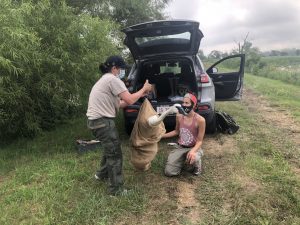 Earlier this year, the Cincinnati Zoo donated $2,400 to support the Ohio Trumpeter Swan Movement Study.  The Cincinnati Zoo Bird Team was very excited to be a part of a local conservation initiative and hopes to continue to be involved with these efforts.

Trumpeter swans currently breed throughout most of the western Great Lakes region, including in Minnesota, Wisconsin, Michigan, Iowa, Manitoba, Ontario, and Ohio. However, beyond estimates of population size and trend and distribution, there is relatively little recent information about their ecology, hindering conservation decision making.  The results of this study will inform current and future Interior Population trumpeter swan conservation by providing basic information about migration, year-round movements, mortality risks, and use of agricultural and other landscapes.  To address current information needs, we are marking a sample of Interior Population trumpeter swans with GPS-GSM transmitters. These transmitters record high-resolution, high-frequency location and related data and transmit those data through cellular phone networks. 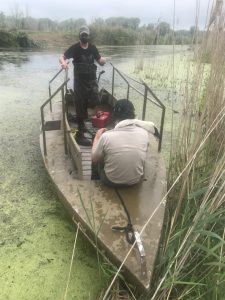 Originally I was going to send 1 or 2 Cincinnati Zookeepers to help mark these birds, but then COVID-19 happened. Even though we opted out this season, I’m happy to share some good news which seems few and far between these days.

While taking several precautions due to COVID-19, Ohio was still able to GPS collar 12 trumpeter swans this summer in various parts of Ohio.

Three Ohio Zoos were able to help fund 9 out of the 20 GPS collars purchased for the Ohio study. Cincinnati Zoo was able to purchase 2 collars. The transmitters are solar powered and last 3-4 years.  Participation was limited due to safety concerns but despite the limitations, it was a very successful first year and 8 more swans will plan to be GPS collared next summer in additional locations in Ohio.

For Ohio, the collaring began in mid-July and continued until mid-August. The project timeline has a short window each year as swans have to be marked when they are molting their feathers and cannot fly.  This was done mostly with a small motorboat and once a molting swan was identified, it only took a matter of minutes.  Once the swans were in hand, weights were taken along with head and leg measurements. Blood was also obtained for genetic testing and lead analysis. The swans were then fitted with a leg band and the GPS transmitter (collar). The Ohio swans are marked with collars that have one number and then the letter “M” or “N” for example 0M, 1M, 2M and so on. The swans were then released back into the same location they were initially found. This year Ohio swans were collared near Ottawa, Port Clinton and the Columbus area.

The hope is to include more Zoo staff next summer to help collar the remaining 8 swans. 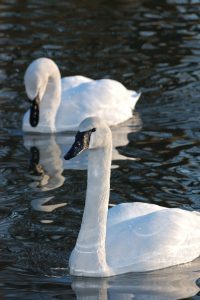 Trumpeter Swans at the Cincinnati Zoo

The Cincinnati Zoo is home to two trumpeter swans, Sandler and Elizabeth. Sandler is a 10-year-old male who came to the Cincinnati Zoo from the Sedgwick Zoo in 2010. Elizabeth is a three-year-old female that came from the Maryland Zoo in 2017. She weighs about 18 pounds and Sandler weighs in around 22 pounds. Sandler and Elizabeth are a breeding pair and their future offspring will be candidates for release in conjunction with the trumpeter swan SSP and the Iowa DNR!

The trumpeter swan was nearly hunted to extinction for it’s skin, feather, meat and eggs in the early 1900’s. Protection, habitat restoration and reintroduction have allowed the trumpeter swan to make an amazing comeback. A male and female, known as the cob and pen respectively, mate for life and share in raising the young.