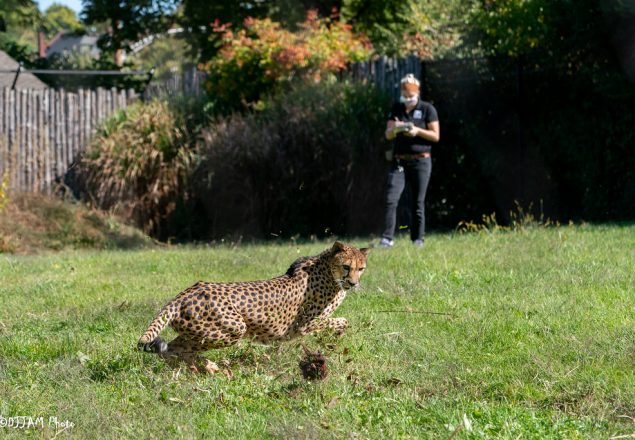 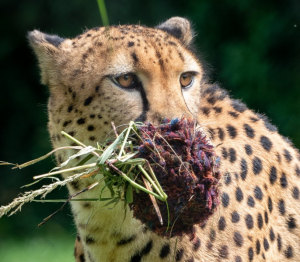 It is well documented that cheetahs are the fastest animals on land. They reach speeds of up to 70 miles per hour and can accelerate from zero to sixty in just 3.4 seconds. At the Cincinnati Zoo, in normal non-COVID times, guests have the opportunity to witness this remarkable feat at the Kroger Cheetah Encounter. All of our ambassador cheetahs are trained from a young age not necessarily how to run, but what to run after and how to do it safely. We run our cheetahs on a battery powered lure machine. In its simplest terms, it is a wheel, with a long string that we set up in our running yard by attaching it to pulleys on the ground. At the very end of that line is what the cheetahs are chasing, a fluffy dog toy.

This running system has been used for decades here at the zoo and we even had National Geographic come out to film our cheetahs running in 2012. They got remarkable footage, the first ever high definition slow motion video of cheetahs running (check that out here) and our cheetah Sahara, set the world record for the fastest cheetah ever recorded. She ran 100m in 6.13 seconds, in comparison the world’s fastest human Usain Bolt’s ran that same distance in 9.58 seconds. Sahara’s record still holds to this day.

Aside from being timed during that National Geographic run, there are not really any scientific studies specifically on cheetah speeds. It is pretty difficult to record the speeds, and there are not a lot running facilitates with the capacity to be able to record them in the first place. Here at Cincinnati we have been curious as to how to record our cats, so we invested in getting a speed radar gun, typically used in sports like baseball. This has been giving us reliable speeds for our cats, by recording them as they run away from the speed gun.

As educators we talk a lot about how cheetahs are so fast with their remarkable adaptions, and we also say that the girl cheetahs are faster than the boy cheetahs. It is pretty easy to tell once you observe our girl and boy cheetahs who is faster, but there has not been a methodical study done to actually prove it. That’s where I come in, wanting to do something to change that. 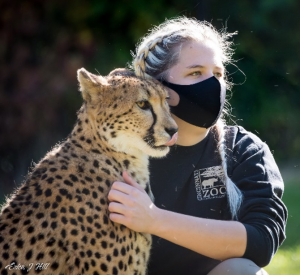 Not only am I a trainer in the Cat Ambassador Program, but I am also in the process of getting my master’s degree in biology at Miami University. I am doing this through a really cool program called Project Dragonfly’s Advanced Inquiry Program right here at the Cincinnati Zoo. This semester I am taking an animal behavior course and throughout the term we are tasked with coming up and implementing an animal behavior study. I took that as the perfect opportunity to blend my work with my school and finally try to prove if indeed girl cheetahs are faster than boy cheetahs.

There are many theories out there as to why girls are faster than boys. One of them is that female cheetahs are the only ones who raise their young and can have litters up six individuals. That is a lot of mouths to feed until the cubs are able to hunt on their own, which often takes two years. The theory is that they are faster so that they can be more successful hunters to provide for their cubs. Female cheetahs are also significantly smaller than male cheetahs. Therefore, the second theory as to why males are slower is because they are that much larger and getting a bigger body size up to those top speeds is a lot more difficult. Even though as trainers we have extensive experience running our cheetahs, we have not methodically studied it, until now. 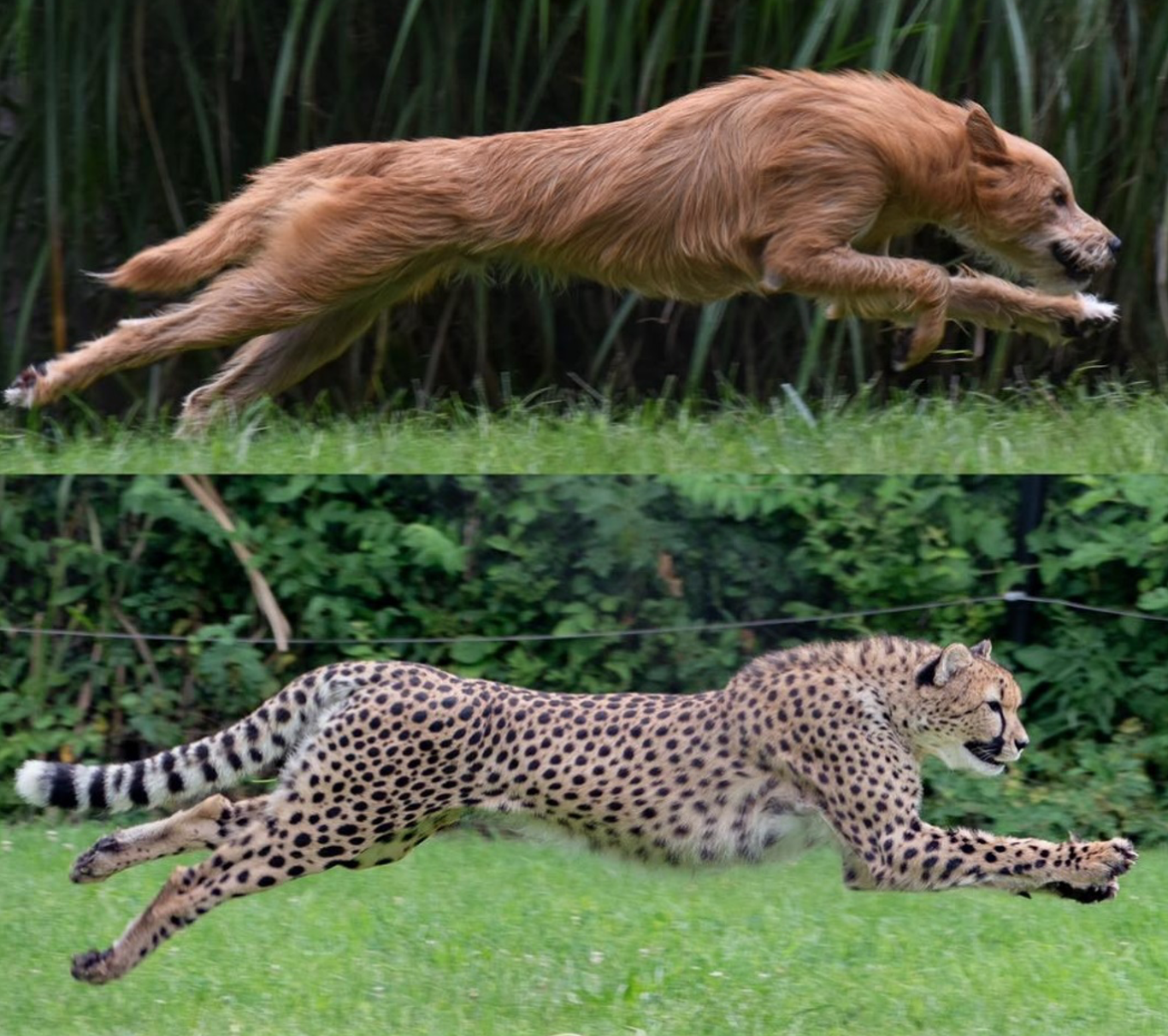 I decided to put this theory to the test for my research project and have started recording the runs of 6 of our ambassador cheetahs, including our cheetah companion dog Remus for fun. Most of the speeds I have been getting back have been pretty remarkable. The fastest speed I have recorded so far has come from our four-year-old female Cathryn at 61mph! I am in the process of recording as many runs as possible over the next few week and will then hopefully have enough data to truly determine who is faster, girl or boy cheetahs! Stay tuned on the zoo’s social media pages for results and updates on our ambassador cheetahs.

5 thoughts on “Girls Rule! Studying the Science Behind Their Speed”