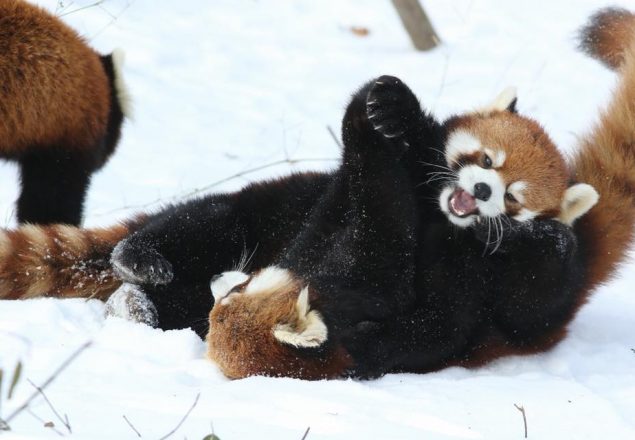 The Zoo is a magical place in the winter! From more than 4 million LED lights to winter weather animals, you won’t want to miss the fun!

The temperatures are dropping but these cool animals will make you feel warm and fuzzy!

Learn more about adaptations these animals have that you’re sure to be jealous of during the winter months ahead! We will also be highlighting a lot of these animals when we bring  back Home Safari weekdays in February! If you’re attending PNC Festival of Lights, come before 5 for a chance to see animals. 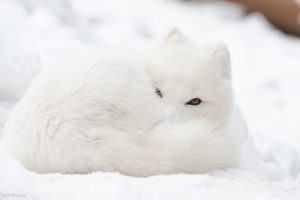 Sly and Fifi are quite the duo! These two can be seen outside at the Zoo year-round. They trade in their dense, white winter fur for a lighter, brown coat in summer!

To survive in frigid Arctic temperatures, the Arctic fox wears a thick furry coat that even covers the soles of its feet. During heavy snow, the fox switches from hunting its own prey to feeding on scraps left behind by a polar bear when it moves on from a meal. 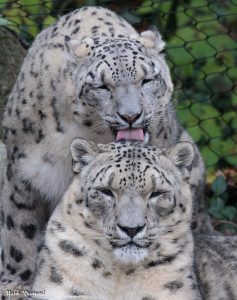 Snow leopards Renji and Nubo call Cat Canyon home! These two are easy to tell apart by their noses. Nubo’s is black while Renji’s is pink. In January of 2020, our snow leopards got a newly updated habitat! Updates include a large new tree, a cave, and more places for them to climb and perch.

The snow leopard’s five-inch thick coat affords great protection from the cold. The coat also comes in handy as camouflage, helping the leopard blend in with the rocky terrain to hide from potential prey. Sadly, the beautiful coat also hinders the leopard’s survival, as poaching for the fur is one of its major threats. Up to three feet long, the snow leopard’s tail helps it maintain balance while navigating steep and rocky slopes. 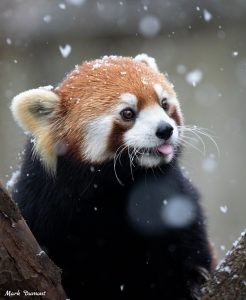 The Cincinnati Zoo is home to five red pandas – Lin, baby Lucas, Kendji, Audra and Lenore! Red pandas are built for the snow with a thick, furry tail that wraps around their body and hair on the bottom of their feet to keep them from slipping on branches.In fact, their entire body is covered in hair except for their eyes and nose!

Red pandas are listed as Endangered on the IUCN Red List due to illegal trade and poaching, habitat loss and fragmentation; habitat degradation; and physical threats as well as natural disasters. The Cincinnati Zoo supports the efforts of the Red Panda Network to protect red pandas and their bamboo forests in the wild through the education and empowerment of local communities.

SNOW ❄️ MUCH ❄️ FUN! Red pandas are built for the snow with a thick, furry tail that wraps around their body and hair on the bottom of their feet to keep them from slipping on branches. pic.twitter.com/4QTFyF1mvo 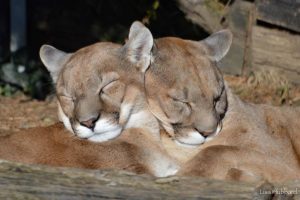 Joseph and Tecumseh are brothers, and cats of many names! The cougar is known by many different names, including mountain lion, puma, and panther. A way to tell these two apart is to look at their eyes. Joseph has dark tear markings that are next to his eyes while Tecumseh doesn’t. Joseph also has some white spots on his back.

Cougars have large paws help them walk on the snow and not sink deep into it like a deer or elk. Mountain Lions are most active in the winter because snow offers them several advantages over their prey. In the winter, mountain lions visually track their prey by following their hoof-prints in the snow. Did you know: mountain lions walk with their claws retracted so you will see only the round toe prints without the triangular claw marks. 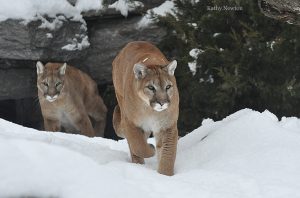 According to the IUCN Red List, pumas are listed as Least Concern and threatened by habitat loss and fragmentation, and poaching of their wild prey base. They are persecuted across their range by retaliatory hunting due to livestock depredation, and due to fear that they pose a threat to human life.

The Zoo’s Penguin Parades are back in 2021! Watch these sharply dressed birds waddle through the Zoo. 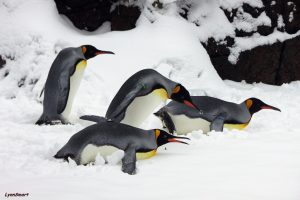 The second largest penguin, the king penguin spends most of its time at sea, coming ashore only during the breeding season. With about 70 feathers per square inch, penguins have more feathers than most other birds.

A thick layer of body fat and a waterproof coat insulate the penguin from icy temperatures. Penguins are counter-shaded for camouflage; while swimming, the black back blends in with the dark sea below, and the white belly blends in with the sunlight above. King penguins have to watch out for predators such as leopard seals and killer whales. On land, tobogganing on their bellies is a quicker way to get around than walking. 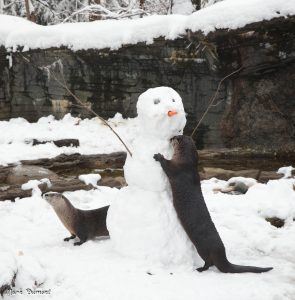 Sugar and Wesley and otterly adorable! And much better suited for winter than us humans!

Ranging over much of North America, the river otter survives anywhere with access to abundant prey and clean water. An otter has 450,000 hairs per square inch. This waterproof fur keeps them insulated and warm in the winter! River otters also have a fast metabolic rate — almost 50 percent faster than similar-sized land mammals, according to SeaWorld. This is important because river otters lose heat quickly in water, so they must constantly burn energy to replace lost heat.  The river otters’ fur and layer of fat underneath their fur assists in slowing heat loss while swimming.

Otters Sugar & Wesley are having snow much fun this morning! The river otter is famous for its playful antics! #snow #cincywx #cincinnati ❄️ pic.twitter.com/vgrqLdw1sd 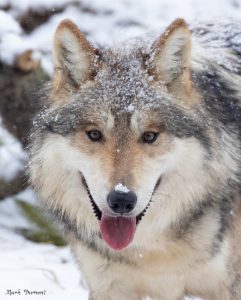 Mexican wolves are very tough creatures! They have a double layer of fur to help them stay warm in the winter! Their underfur grows thick in the winter and the outer layer of fur helps repel water & snow. Their feet have pads with small bumps that help prevent them from slipping.

Though they once numbered in the thousands, these wolves were wiped out in the U.S. by the mid-1970s, with just a handful existing in zoos. In 1998, the U.S. Fish and Wildlife Service, led by Jamie Rappaport Clark (now president of Defenders of Wildlife), released 11 Mexican gray wolves back into the wild in Arizona. Although their numbers have grown slowly, they remain the most endangered subspecies of wolf in the world. 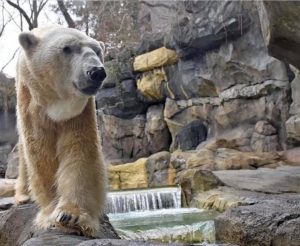 Little One is the second oldest polar bear in the U.S. Zoo population! He’s been with us for a long time and just celebrated a special 31st birthday! The median life expectancy for a male polar bear is 21. Little One’s longevity can be attributed to the excellent care he receives.

Polar bears are strong swimmers and divers, a characteristic that allows them to swim from one ice floe to the next. As humans, we need protective clothing and/or shelter to stay warm. Polar bears don’t. According to our friends at Polar Bears International, their bodies thrive in the stark temperatures.

Polar bear fur is made up of a dense, insulating underfur that is topped by guard hairs that vary in length. The fur prevents almost all heat loss—in fact, adult males can quickly overheat when they run. And surprisingly, the fur isn’t actually white—it just looks that way. Each hair shaft is pigment-free and transparent with a hollow core that scatters and reflects visible light, much like what happens with ice and snow. To keep them warm, polar bears have black skin over a thick layer of fat. In the water, they rely more on their fat layer to keep warm; wet fur is a poor insulator. 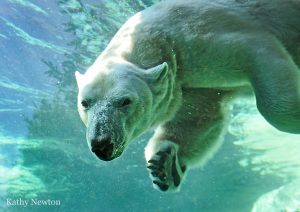 Polar bear paws are ideal for roaming the Arctic. They measure up to 11.81 inches across, to help polar bears tread on thin ice. When the ice is very thin, the bears extend their legs far apart and lower their bodies to distribute their weight. Their skin isn’t the only thing working to keep them warm—their ears are small and round, and their tails short and compact, to conserve the most heat possible. Black footpads on the bottom of each paw are covered by small, soft bumps known as papillae. Papillae grip the ice and keep the bear from slipping. Tufts of fur between its toes and footpads can help with security as well.

Polar bears are listed as Vulnerable on the IUCN Red List. The Zoo is working hard to save polar bears. The Lindner Center for Conservation and Research of Endangered Wildlife (CREW) scientists have studied 63 polar bears at 30 North American institutions since 2007. The IUCN cites loss of Arctic sea ice due to climate change as their most serious threat. This species depends on sea ice to survive. The Cincinnati Zoo is also proud to partner with Polar Bears International as an Arctic Ambassador Center to help spearhead community efforts to reduce carbon dioxide and to educate visitors about global warming and wildlife conservation.

Even though we might not have as many cold weather adaptations as our wild friends, bundle up and head to the Zoo to check these winter-loving animals out for yourselves!

PNC Festival of Lights is all about… the LIGHTS! Our Zoo animals usually head indoors around 5pm or sooner so make sure to book a reservation early and stay for the lights if you’re hoping to see animals! Make your reservation.

2 thoughts on “Walking in a Winter Wonderland ”