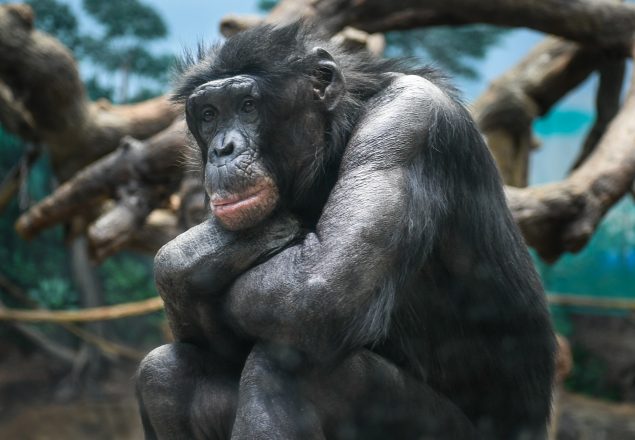 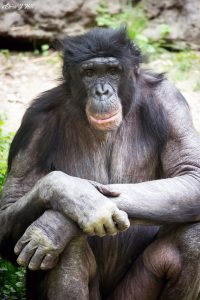 Happy 49th Birthday Vernon! Vernon is the oldest mammal at the Cincinnati Zoo and the oldest male bonobo that is known to be in human care. Vernon has called the Cincinnati Zoo home since 1992 and has been a resident of Jungle Trails since its opening in 1993. He was named after a primatologist named Vernon Reynolds, founder of the Budongo Conservation Field Station, who is still alive today!

And even at his age, he is still going strong! Vernon has sired 17 offspring since 1978, with 8 of them being born at the Cincinnati Zoo! He also has 28 grandchildren and 13 great grandchildren. Bonobos are listed as endangered on the IUCN Red List due to deforestation and poaching, so each birth is critical to this species survival.

There are currently 9 bonobos at the Cincinnati Zoo. We are one of eight facilities in the US that care for bonobos. All of the facilities work closely together to ensure long term genetic diversity for this endangered species. Most recently, Vernon’s companion Kesi became a first time mom with the birth of Amali! 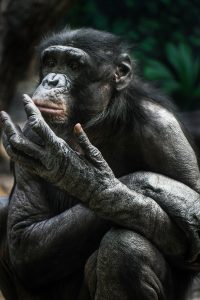 Vernon’s care team describes him as very sweet and a very special bonobo. Even at 49 years old, he still plays with the young bonobos! His favorite foods are oranges, apples, corn and hard boiled eggs. Vernon’s favorite enrichment includes opening paper bags or recycled cardboard boxes! Enrichment is anything the zookeepers add to the animals’ environments to stimulate their senses and elicit natural behaviors such as foraging, exploration, hunting, problem solving, and even play.

Also called the pygmy chimp, the bonobo is slightly smaller than the common chimpanzee. Sharing more than 98% of its DNA with humans, the bonobo is our closest living relative. Like humans, bonobos live in family groups and are highly intelligent. They often stand upright on two feet as we do. Bonobos are capable of making and using tools, a characteristic that once distinguished humans from other animals.

You can help save endangered bonobos and other African great apes who share their habitat by recycling your cell phone. Cell phones contain an ore called Coltan, which is mined in endangered bonobo habitats in Africa. Loss of habitat and hunting are serious threats to their future. Reducing the demand for Coltan, will help save these animals and their habitats. The Go Bananas Challenge is our annual cellphone recycling campaign. It is open to schools, scout troops, and community groups and clubs. Groups that participate in the challenge have the chance to earn up to $5000 for their organization! As an added bonus, groups who join the challenge by March 1st will have a chance to win a gorilla painting that was painted by Jomo, the silverback gorilla! Join the challenge today!

The Cincinnati Zoo’s Project Saving Species funds funneled through the Ape Taxon Advisory Group (TAG) have been directed towards work with The Bonobo and Congo Biodiversity Initiative (BCBI). BCBI studies and protects bonobos in Salonga National Park in the Democratic Republic of Congo through ecological research and monitoring, anti-poaching support and guard training, and community assistance.

On February 12, the Cincinnati Zoo will be celebrating World Bonobo Day with a Home Safari Facebook Live at 1pm ET. Tune in to the Zoo’s Facebook Page to see Vernon and his family group and to learn more about bonobos!

6 thoughts on “Celebrating Vernon: The Oldest Mammal at the Cincinnati Zoo”