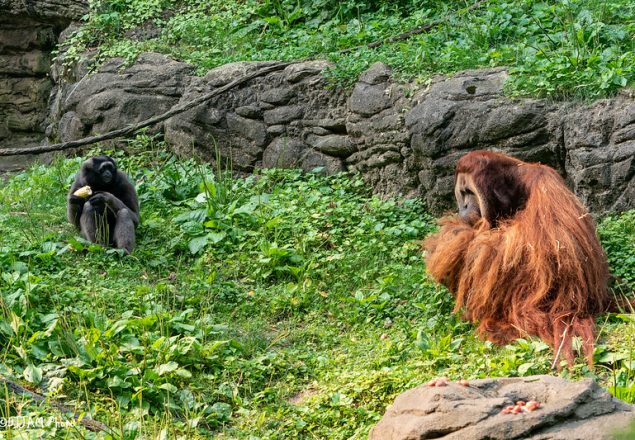 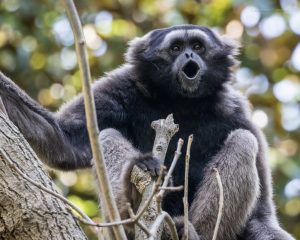 Lance is a 28-year-old male Mueller’s gibbon. His female companion, Emily, passed away due to old age and declining health early in 2021. While Lance has been acting and eating normally since her loss, the Jungle Trails team prioritized him having visual/auditory access to other primates. Because of this, Lance has not gone to the former Mueller’s island habitat for the season! (Look for Sammy the cockatoo there instead.)

Lance has been living at the Jungle Trails east building so he could be around our male orangutan, Henry, and our white-handed gibbons, Connie and Hosen. While he hasn’t gone into the same space as them, he still gets social stimulation from being able to see and hear them. 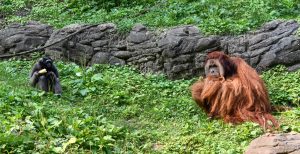 Once it warmed up and we had the outdoor space as an option for the season, we gave Lance the opportunity to explore the yard by himself. He did this for weeks, learning the structures/space and learning the shifting routines keepers use to move him voluntarily between spaces. Once he seemed confident, we did “howdy mesh” introductions between Lance and Henry inside. This allowed them to be next to each other, while still being protected from each other in case we saw any non-friendly interactions. We saw mild interest from both individuals and neutral behavior. After a couple weeks of howdy mesh access, we let them be in the outdoor yard together for the first time! While it will take them some time to figure each other out, they’ve already been sitting in proximity and eating together! This is a pretty huge and positive step for the first day of an introduction! Moving forward we expect them to continue the process of getting more comfortable with each other… while they learn about each other’s preferences. 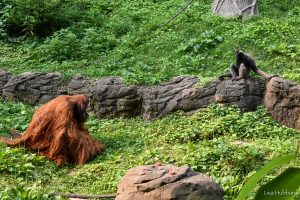 The end goal of this introduction was to facilitate an enriching social opportunity. While both Henry and Lance are comfortable on their own, having the option for social interaction- especially with another species- gives them a stimulating variation in their environment. We will rotate Henry with the white-handed gibbons or Lance throughout the rest of the warm weather season. We do not plan to house the gibbon species together, as that social interaction would not be a positive experience. Gibbons, especially when in their monogamous pairings, can be very territorial towards other gibbon species.

They’ve been doing well together, hanging out all day, and visitors can expect to see Lance with Henry every other day as he rotates with the other gibbon species! Visit Jungle Trails and watch the Zoo’s social media for updates on this new friendship!

2 thoughts on “A Friend for Lance”