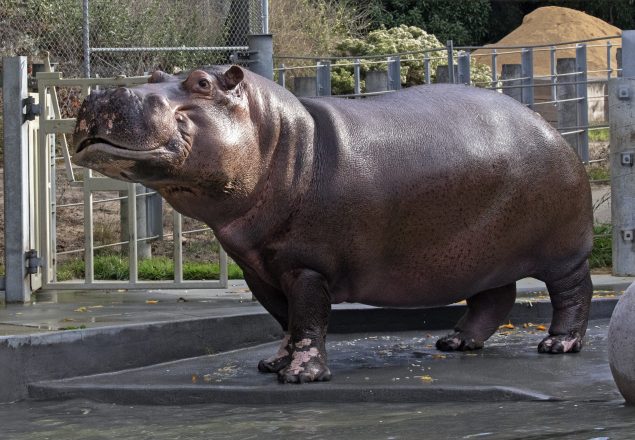 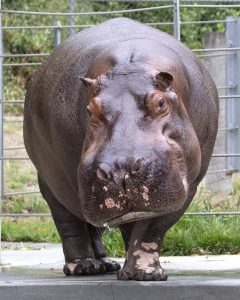 Another hippo will be making a big splash in Hippo Cove soon! Tucker, an 18-year-old male from San Francisco, arrived at the Cincinnati Zoo last night!

Tucker was born on May 18, 2003, at Disney’s Animal Kingdom, and his official name is Tucker, which is what we will call him. He has lived at the San Francisco Zoo for the last 10 years and went by the nickname Bruce, a tribute to San Francisco Giants’ manager Bruce Bochy. According to Tucker’s keepers at San Francisco Zoo, guests loved watching him in his pool, playing with enrichment items and snacking on his favorite foods – melons, beets, squash, hay and grain.  Those prized items will all be included in his diet in Cincinnati.

The Association of Zoos and Aquariums’ Hippo Species Survival Plan (SSP) recommended that Tucker move to Cincinnati to be Bibi’s companion and to enjoy being part of a hippo pod. If a baby is in their future, it will hopefully be a ways down the road before that happens!

He even got a nice welcome from Cincinnati Reds catcher, Tucker Barnhart!

How to get a hippo from San Fransico to Cincinnati? 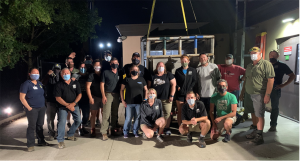 Tucker’s keeper from the San Fransico Zoo traveled with him on the journey. The transport went well thanks to an amazing team of animal care staff loading him in San Francisco, and a truly massive support effort all along the way (over 65 people were involved in coordinating the logistics of the move). Once they got to Cincinnati, Schaffer Towing was very efficient in getting the crate carefully loaded and transported. The Zoo’s very talented maintenance team made everything go as smoothly as it could possibly have gone for unloading a two-ton animal! 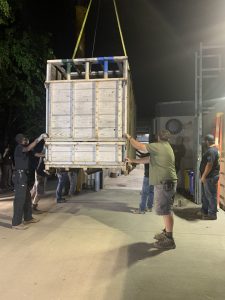 Tucker was calm throughout his journey, he drank water, ate a fair amount of hay and was misted several times in transit. He is in good condition this morning after spending the night soaking away the rigors of travel in one of two Tucker-sized indoor pools! 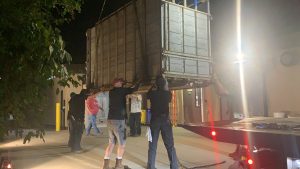 Now, the next leg of the journey begins as the Africa care team has their work cut out in building a relationship with him, gaining his trust and introducing him to his new roommates, Bibi and Fiona!

We estimate that Tucker somehow altered over 85 people’s schedules (and one major airplane’s schedule too) over the last day, and he created new fans of hippos every step of the way! 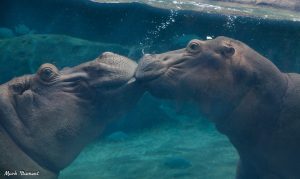 Bibi and Tucker will get to know each other by being in close proximity in the indoor habitat before they share the same space.  After that, they will explore the outdoor habitat together. Fiona will become familiar with the new hippo by seeing, smelling, hearing, and observing him with Bibi. She will share space with Bibi and Tucker once they are comfortable with each other.

Tucker weighs about 4,500 pounds, which is 1000 more than Bibi. They both eclipse Fiona, who has not yet reached the 2,000-pound milestone! Another thing that’s different about males is the way they poop. They flip their tails back and forth and spray feces everywhere.  It creates a big mess for keepers to take care of in the hippo barn! 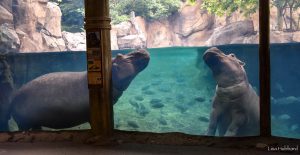 While not considered endangered, Nile hippos share ecosystems with many critically endangered species including elephants and rhinos. As an indicator species, the hippos’ plight can provide information about the challenges being faced by other species in their native lands. Addressing issues at the ecosystem level helps all of the other species living in the same regions. They are also responsible for creating and maintaining water “roads” and channels in the wetlands they call home – allowing water to flow further, and helping smaller species move around the wetlands to find resources and safety in ways they couldn’t if hippos didn’t exist. They also need to eat a huge amount of grasses each night when they leave the water to graze on land, this allows them to maintain grasslands near the water that numerous other animals depend on.

A date for Tucker’s public debut has not yet been set but will be posted when we have that information. We will try our best to limit the times when Fiona will not be visible to the public, during the introduction period, but will make an announcement online whenever her absence is necessary. The hippo care team is aware that Fiona fans travel from all over the world to see her, so they will do everything possible to maximize her outdoor time during the introduction period.  If there are days when she will not be visible, the Zoo will post that information on its website – cincinnatizoo.org.  Be sure to check before you visit!

6 thoughts on “Welcome to Cincinnati, Tucker!”