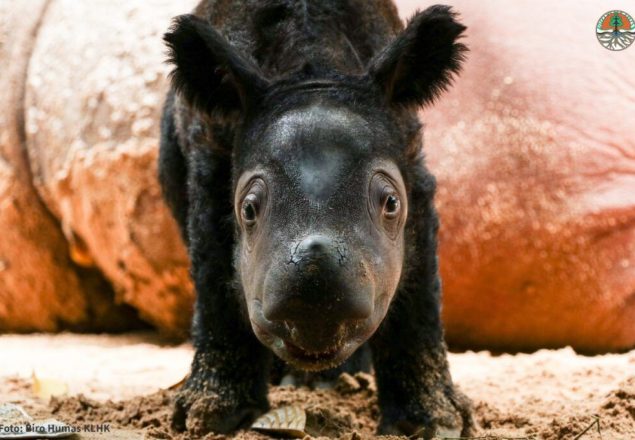 A female Sumatran rhino calf was born at the Sumatran Rhino Sanctuary (SRS), 10,000 miles away from Cincinnati last week!  The Sumatran rhinoceros (Dicerorhinus sumatrensis) is one of the most endangered animals on Earth with approximately 80 individuals distributed throughout fragmented rainforests of Southeast Asia. Only six have been born in a managed breeding situation in the last century, and the first of those was born at the Cincinnati Zoo & Botanical Garden in 2001.  His name is Andalas, and he is the grandsire of the new calf!

In 1984, a zoo breeding program was formally established for this species, but efforts to propagate these rhinos in zoos initially failed. In 1997, Cincinnati Zoo’s Lindner Center for Conservation and Research of Endangered Wildlife (CREW) scientists initiated research using endocrinology and ultrasonography to learn about the reproductive physiology of the species. As a result, scientific breakthroughs led to the first Sumatran rhino calf bred and born in a zoo in 112 years at the Cincinnati Zoo on September 13, 2001! He was named Andalas.

Since the birth of Andalas, two additional calves were born in Cincinnati. In 2007, Andalas, was relocated to the SRS on the island of Sumatra, and in June 2012, Andalas’ mate, Ratu, gave birth to a healthy male calf. This series of successful births clearly demonstrates how productive a breeding program in zoos can be when it incorporates good science, veterinary care, animal husbandry, and international cooperation. The Cincinnati Zoo and its Indonesian partner, the Sumatran Rhino Sanctuary, are the only two places in the world that have succeeded in breeding the Sumatran rhino in the last century.

Emi & Ipuh had three calves born at the Cincinnati Zoo:

Ratu & Andalas had two calves born at the SRS:

Rosa & Andatu’s calf was born at SRS this week:

This recent birth is significant for many reasons. This is the first Sumatran rhino born from a parent that was also born at SRS and introduces much-needed genetic diversity from the dam, Rosa, who had not until now reproduced and had lost eight pregnancies before delivering this calf.   Learn more about the historic birth in this announcement from the International Rhino Foundation.  Cincinnati Zoo’s expert Sumatran rhino caregiver, Paul Reinhart, was once again invited to the SRS to assist if necessary, making Paul the only person to witness all six Sumatran rhino calf births in the history of the program.

This momentous event makes Andalas a grandsire at just 21 years of age and augments the Cincinnati Zoo’s legacy in the effort to save this critically imperiled species. With so few individuals thought to exist in the wild, the SRS breeding program has become the focal point for saving the species from extinction.

There are now a total of eight Sumatran rhinos at SRS. In addition to Andalas, Ratu, Rosa, Andatu, and the new calf, there’s six-year-old female Delilah, the second offspring of Andalas and Ratu, and an older female named Bina. The other eligible bachelor is Andalas’ brother Harapan, who came to SRS from Cincinnati Zoo in 2015.

The SRS team is hoping to breed Harapan to Delilah this year. Many remember seeing Harapan at the Cincinnati Zoo prior to his long journey to Sumatra in 2015, and he is still beloved from afar!

Photos of the new calf provided by the Indonesian Ministry of Environment and Forestry. Photos of Andatu and Rosa provided by International Rhino Foundation.