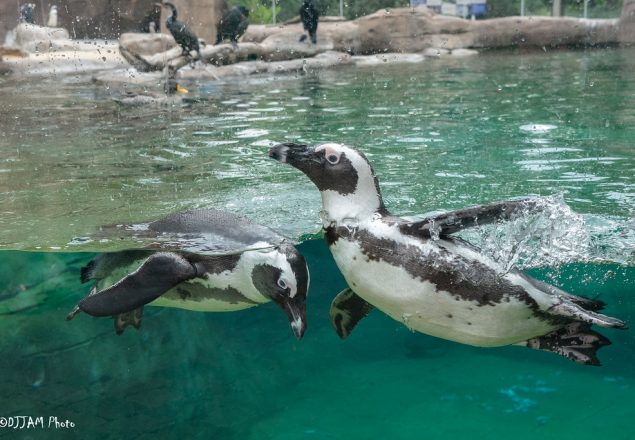 For this World Penguin Day, on April 25, the Cincinnati Zoo & Botanical Garden wants to highlight one of our favorite flightless birds, penguins.  The Zoo is home to five species of penguins: Magellanic, king, Southern rockhopper, little blue, and African penguins. Though we recognize these animals for their black and white bodies, these birds come in various shapes, sizes, and colors.

With 18 different species of penguins, there are a variety of adaptations that help us identify them. The largest penguin, the emperor, standing tall above a colony crowd with a yellow stripe on its head, down to the

smallest penguin, the little blue, barely taller than a foot with a shimmering blue body of feathers. The coloration on their feathers and well as their size and habitat range help scientists and casual observers distinguish between individual species of penguin. Although some island-dwellers live in warmer climates, mostly penguins are designed with a thick layer of blubber and tightly packed feathers, ideal for frigid temperatures; perfect for living mainly below the equator.

Living on land, penguins waddle and hop to travel (some for great distances). In the water, stiff, modified wings, countershading coloration, and a hydrodynamic shape make them especially adept at swimming after their food. Penguin species vary as much in their size (weighing 2-80 pounds and measuring 1.5-3.5 feet tall) as they do in the climates they inhabit (they are found in the Southern Hemisphere from the equator to the South Pole).

Regardless of the species, penguin population records show these birds’ numbers are on the decline. According to the IUCN Red List of Threatened Species, there are a variety of penguins listed as endangered. Most other species are listed as vulnerable or threatened. Though they have natural predators in the wild, their decline in population is from loss of habitat, disease, and human conflict. Two of these factors, habitat loss and human conflict, have big impacts on penguins’ ability to find food and successfully raise chicks to maintain population numbers. Both commercial fishing and climate change are affecting the abundance and location of the penguins’ food sources. The good news is, we have the ability to help these penguins through our own choices and actions. By taking steps to be a mindful seafood consumer and responsibly managing fossil fuel use, you can help protect the fisheries upon which these penguins depend.

Here at the Cincinnati Zoo, we are taking additional steps to help support many species of penguins. The Cincinnati Zoo & Botanical Garden has partnered with SANCCOB (the Southern African Foundation for the Conservation of Coastal Birds) a non-profit wildlife organization to help protect penguins. When you visit the Zoo, a portion of your ticket/membership fee helps the Zoo support these efforts.