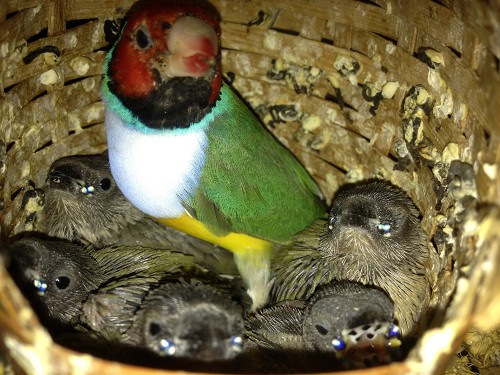 The offspring of many finch species, like these Gouldian finch (Chloebia gouldiae) chicks, have luminous nodules, called papillae, on the sides of their beaks and markings on the inside of their mouths. Together, these act as sort of a “beacon” to direct the parents to the hungry mouths of their chicks in dark nest cavities.  Each species of finch has a different arrangement of papillae and mouth markings.  As each chick develops into an adult and begins to eat without parental assistance the papillae and markings gradually disappear.

Gouldian finches are a species of grass finch that inhabit the savannah regions of northern Australia.  Australian seasonal changes range from a dry season lasting about six months to a wet season, which lasts about three months.  These finches feed primarily on grass seeds throughout the year.  However, in the beginning of the dry season when the grasses turn brown and go dormant, an abundance of fallen seeds previously hidden become more available to the birds.  This period of plentiful food directly coincides with and activates the Gouldian finch breeding season.

Wild Gouldian finches breed at the end of the wet season.  The male and female will remain together for an entire season.  The parents lay four to eight eggs in one clutch that will hatch after 14 to 16 days of incubation.  They can lay and raise several clutches in a season, producing up to 20 offspring in that time period.  When the chicks are three weeks old, they will emerge from the nest.  At this time, their feathers are a drab olive green, unlike their colorful parents.  Then after about nine weeks, the bird’s colorful adult feathers will begin to grow. 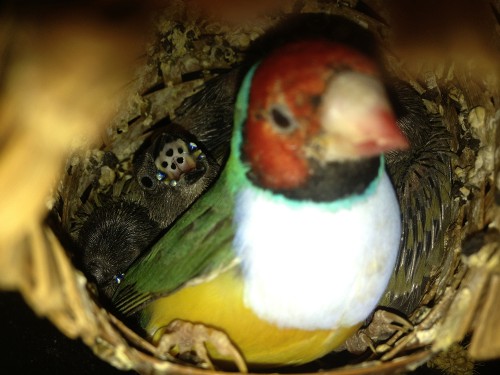 Gouldian finches though common in captivity, were on the endangered species list from 1992 to 2012. Population numbers of these birds have suffered due to grazing and fire management in their dry grassy habitat but more recently they have been upgraded by the IUCN as a Near Threatened species.  It is believed that there are less than 3,000 individuals left in the wild. This fluctuation demonstrates how their wild population numbers can be very fragile.

This is why places like the Cincinnati Zoo are so important in our breeding efforts.  These beautiful birds are displayed to raise awareness about their wild cousins.  Here at the zoo our group of finches (the term for a group of finches is called a charm) is a self-sustaining population.  This means they breed, raise young, and maintain steady population numbers without receiving any additional birds from other institutions.

The Cincinnati Zoo staff supply these colorful little birds with nesting materials, such as dry grasses, leaves, and mulch, and they construct their own nests in small secluded baskets that we provide for them.  They lay their eggs inside, keep them warm, then the chicks hatch and are fed by the parents.  On occasion we inspect the nest to ensure the chicks are doing well and are being cared for properly, but the good thing is that mostly the parents do all the work.  After about 3 weeks the chicks emerge fully feathered and ready to join the charm!

Be sure to stop by the Wings of The World bird exhibit here at the Cincinnati Zoo and check out these vibrantly colored birds!

23 thoughts on “Why are there spots in these birds’ mouths?”