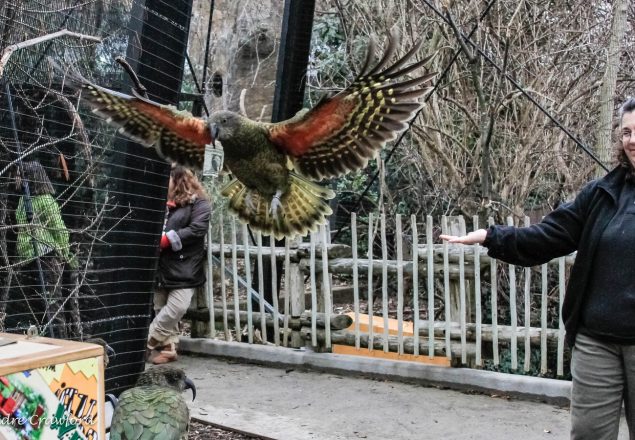 Ground-nesting parrots native to the Southern Alps on the Southern Island of New Zealand, keas have adapted to survive through bitter cold and little food during harsh winters, feeding mainly on bulbs, leaves, seeds, worms and insects, and even Hutton’s Shearwater chicks and eggs when other food isn’t available. Males are slightly heavier than females weighing about 850 to 1,000 grams (around 1.5 to 2 pounds) and have noticeably larger upper mandibles.

Keas have beautiful olive green feathers that become slightly darker at the end. If you look closely when they spread their wings, you will see a brilliant orange color on the under part of their wings. While keas are strong fliers, they spend a great deal of time on the forest floor foraging for food.

These clever parrots are considered to be as intelligent as primates. They regularly engage in play behavior and display play signals much like canids and primates do. They can also learn and adapt very quickly when presented with new situations such as the new Kea Encounter!

Keas are listed as Nationally Endangered in New Zealand and as Vulnerable on the IUCN Red List of Threatened Species.  This means it faces a high risk of extinction in the wild. They have been considered a threat to livestock and 150,000 birds were killed as part of a government bounty system. They have also seen a decline in numbers due to invasive species, habitat loss and lead poisoning. Only in 1986 did they finally receive legal protection. Clearly, they are in need of our help.

Keas at the Zoo

The Cincinnati Zoo is home to over 40% of the entire kea population in North America with 16 keas, include 10 adults (five males and five females) and six juveniles. The juveniles hatched in April and are growing rapidly, already weighing as much as a young adult. Juveniles can be spotted by the yellowish coloring around their eyes and beak, which fades to dark brown after several years.

At the new kea exhibit (formerly Lorikeet Landing), there is large window through which guests can view the birds. Here, guests can play an interactive game with the keas to move a quarter through a puzzle by taking turns at turning gears and flipping levers.

There is also an interactive that challenges guests to be clever like a kea and move a ball around a track by working together. Keepers are on hand each day at 10:30 AM to chat with guests (check the daily animal encounters schedule for confirmation).

During the special Kea Encounter on Thursdays, Saturdays and Sundays from 4:00 to 5:00 PM, visitors are invited to enter the kea habitat. During that time, you can get up close views of the birds as they fly over your head and hop on the ground around you. With keeper assistance, the birds will accept donations for kea conservation; taking your dollar in their beak, they fly to a donation box and drop it in.

Funds raised by the Zoo support the  Kea Conservation Trust (KCT) in its mission to protect keas in the wild through nest monitoring and tracking kea movements. KCT is also testing a non-toxic repellent spray that would keep keas away from livestock and, in return, protect keas from farmer retaliation.  (Keas have been known to peck at and feed on the backs of sheep with their sharp beaks.)

Next time you’re at the Zoo, be sure to stop by and participate in our new Kea Encounter!