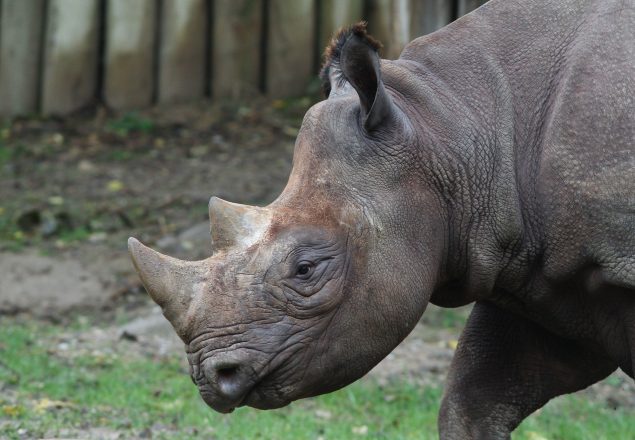 Seyia arrived at the Cincinnati Zoo & Botanical Garden in August of 2013 and is currently the only black rhino we have here. She made the long journey all the way from Baton Rouge, Louisiana, where she was born. Seyia will celebrate her fifth birthday on September 28.

The black rhino, or hook-lipped rhino (Diceros bicornis), is native to eastern and central Africa.  Black rhinos are generally solitary animals, except for mothers with calves. However, males and females have a consort relationship during mating, and sometimes young adults will form loose associations with older individuals of either sex.

An herbivorous browser, black rhinos eat leafy plants, branches, shoots, thorny bushes and fruit.  You will often see browse, or large leafy branches, in Seyia’s exhibit, which is one of her favorite things. She also loves bananas, apples, kiwi and melon.  We often utilize these items for her training sessions and as enrichment scattered throughout her enclosure.  On special occasions, we might even give her whole watermelons to smash and eat.

Every rhino has its own personality and Seyia is a real sweetie, yet definitely has some sass and spunk to her.  She loves attention – getting a good rub down, taking a bubble bath, and most of all, interacting with her keepers during training sessions.

Seyia has learned so much over the past year here in Cincinnati. We train all of our animals to do lots of different husbandry behaviors, which helps us provide them with the best care possible. This is especially important when caring for rhinos. The black rhino has a reputation for being extremely aggressive, charging readily at threats. They have even been observed charging tree trunks and termite mounds in the wild! So it takes a very strong bond between keepers and their rhinos to accomplish all that we need to do with them. Only once this trust is formed between keeper and rhino can training begin.

We began the process by hand-feeding her lots of her favorite treats. After that, we began target training and moved forward from there. Seyia has now learned to move either side of her body up against the side of her indoor enclosure. This allows us to get a good look at her, bathe her, and even apply a Skin So Soft solution to help keep her skin moisturized and keep the flies away. She can place either front foot on a block for nail and foot care and is also trained to lay down on command. Right now, we are working with her on opening her mouth so we can check out those pearly whites.  Not only is all this training useful for husbandry and medical care, it’s also a form of enrichment for her.

Seyia, often referred to as “little girl”, is not so little anymore! In fact, as of December 2013, she weighed in at a whopping 2,400 lbs. She is due to be weighed again this fall, and I guarantee she’s grown. Her body and horn are much bigger than when she first arrived.

How do we weigh a rhino? We use a set of truck scales. Our Maintenance department constructed a heavy duty “weight board” that we carefully place over the scales and the rhino can just step on up. We feed her some of her favorite snacks while we watch the number going up until we have an accurate weight. We do this a few times just to be extra certain it’s accurate. This is not only important to ensure a healthy weight, but also for our veterinary staff to know in case of an emergency or if they need to prescribe her any medications.

Next time you are at the Zoo, be sure to stop by the black rhino exhibit in Rhino Reserve (across from LaRosa’s) to see Seyia.  Also, be sure to come out for World Rhino Day on September 21 to celebrate and support rhino conservation efforts here at the Zoo and across the globe.