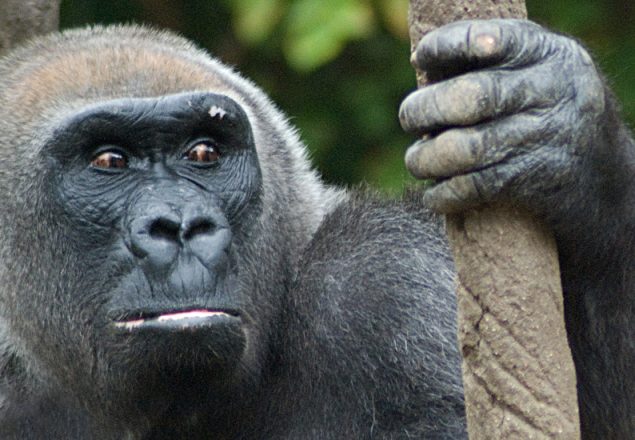 There are about four reptiles living at the Zoo today that have estimated ages older than Samantha, but she is the oldest animal with a confirmed birth date and the oldest non-reptile. Daughter of the legendary founder gorillas King Tut and Penelope, Samantha was born here on January 31, 1970. She and another gorilla, Sam, were born about a week apart and they were the first two gorilla babies born and raised at the Cincinnati Zoo. They were hand raised with the assistance of Good Samaritan Hospital, hence the names Sam and Samantha.They were huge celebrities featured in dozens of articles, photos, postcards and fanfare.

Samantha has been here to experience all of the changes in philosophy that have transformed the Zoo from an old school menagerie to a modern day zoo. Born in the old Ape House in 1970 where the gorillas lived inside year round, Samantha moved to the first naturalistic outdoor gorilla habitat anywhere, Gorilla World, in 1978.

She has experienced innovations in animal nutrition from a high fruit-based diet to today’s high variety bulky green fiber-rich nutritionally balanced diet. She has also experienced the start of comprehensive animal enrichment efforts at the Zoo that provide for animal welfare as much as their physical needs. Over 10 years ago, she was here when we began formal operant conditioning programs at the Zoo as well.

Samantha has also experienced the change over from primarily pulling baby gorillas for hand-rearing to encouraging mother-rearing through improved husbandry and social behavior management. She is the best mother gorilla in the history of the Zoo and has given birth to six gorillas. Samantha’s first daughter, Madge, was born in the early 1980s. She was named after the late great iconic long time Zoo Volunteer Madge Van Buskirk.

Probably the most intelligent gorilla at the Zoo, Samantha is one of the most socially savvy gorillas, too. She has long been the strong matriarchal leader no matter which individuals are in her group. Samantha has lived with over 36 individual gorillas including: Sam, Gigi, Ramses, Kamari, Amani, Rosie, Penelope, Hatari, Tara, Mahari, Bibi, Madge, Muke, Mlinzi, Babec, Ndume, Kweli, Harry, Jackie, Tufani, Colossus, Kima Kubwa, Chaka, Samson, Chewie, Mara, Kijito, Kicho, Cecil, Shanta, Jomo, Bakari, Asha, Anju, Gladys and Mondika. In recent years, she has toned her leadership role back some, but is still respected among the other gorillas.

Samantha has served as an inspirational ambassador for both ex situ and in situ gorilla conservation programs and she is revered among the primate staff and her followers. I even named my daughter after her. (By the way, if you ever should name your daughter after a gorilla, apparently you should not tell her fourth grade class that fact during a visit to the Zoo. I thought it was cool, but being called “gorilla girl” by mean little boys can be a hard thing to live with, I hear.)

At 45 years old, Samantha still seems to be going strong. She is engaged in all of our programs, including operant conditioning, and is one of the best students. In recent years, she has been trained for awake cardiac ultrasound exams and the ticker is looking good. Samantha has seen it all and hopefully she sticks around for a long while to see a whole lot more.

13 thoughts on “Samantha: The Grand Old Lady of the Cincinnati Zoo”