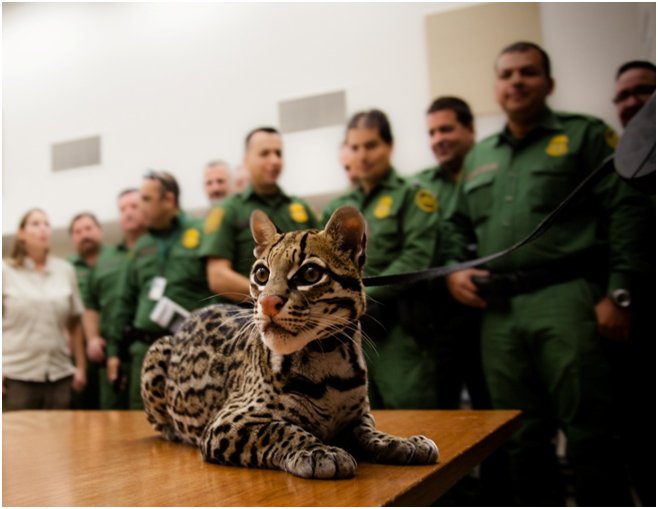 Every year in March brings the Ocelot Conservation Festival – a weekend dedicated to education and awareness for the only remaining population of ocelots in the United States. The Zoo’s ambassador ocelot, Sihil (pronounced like the letters C-L), took her annual road trip to South Texas, with her trainers in tow, to be the star of the weekend’s festivities!

Hosted at the Gladys Porter Zoo in Brownsville, TX, the Ocelot Conservation Festival is coordinated by the U.S. Fish and Wildlife Service (FWS) & the Friends of Laguna Atascosa National Wildlife Refuge. It aims to inspire locals to learn about and become involved in the efforts to protect  native ocelot populations.

You see, the very southern tip of Texas is a very special place. It is the only remaining area in the United States where ocelots can still be found. Once spanning throughout Texas and ranging as far as Louisiana and Arkansas, the ocelot’s habitat has decreased by an estimated 95%. The U.S. ocelot population has declined sharply as well, leaving only about 80 ocelots to be found in Texas, many of which  live on only two protected wildlife refuges (Laguna Atascosa and Lower Rio Grande Valley). Ocelots are listed as federally endangered and in desperate need of help, which is why, since 2007, Sihil and her Cat Ambassador Trainers have made the long journey down to help draw in crowds to hear these important messages.

So how does one travel with an ocelot? Sihil, who is nearing 16 years old, has been an ambassador for her species her whole life. This means she is a seasoned professional at things like car rides, leashed walks, public programming, and displaying trained natural behaviors. She always works closely with her trainers, so a long van ride is no problem for her; in fact, she really seems to enjoy it! Our van is equipped with an XXL traveling crate, propped up so that she is eye level with the windows. She alternates between casually watching the passing cars and buildings, taking cat naps (most cats, even exotics, sleep or rest for up to 16 hours a day), and talking (she chatters, which sounds a lot like a low guttural “maaaawr” and often vocalizes to us more when we “maaawr” back to her) to us while we drive. We give her snacks, puzzle feeders, and toys to keep her occupied as well. When we stop for the evening, she even stays in her crate with us in an animal-friendly motel. (Note: While Sihil is trained as an ambassador ocelot, she, nor any wild cat, would make a good pet.)

Once we arrive in Texas, we are welcomed by Mary Jo Bogotto at the Cactus Creek Ranch. Sihil starts and ends her days here with a leisurely walk on ranch grounds, enjoying the March breeze in Texas and marking some territory (aka: doing her business).

What are we doing in Texas? We have a busy schedule once we arrive in Texas. Sihil is a very popular ocelot, after all. As an ambassador ocelot, she is comfortable in front of new groups and spaces and often shows spectators natural behaviors, such as climbing up, down, and upside down on a prop pole (an adaptation that ocelots are exceptionally good at).  This year, alongside FWS, we made appearances at a local library, border patrol, and the local university (University of Texas Rio Grande Valley) on Friday. Sihil followed an informative presentation about ocelot identification and conservation efforts by FWS. Saturday was the official festival day, which was hosted by the Gladys Porter Zoo. It was an ocelot lover’s dream day: a fun run 5k fundraiser to kick off the festivities, information stations staffed by Laguna Atascosa volunteers, ocelot-themed crafts, and of course, an opportunity to see Sihil in action. The ability to be so close to such an elusive cat draws in room-filling crowds whereever we are presenting.  Seeing Sihil is a unique opportunity for those who have never seen an ocelot before, despite living in such close proximity to a wild population. Being able to learn about and observe a live ocelot helps this community in South Texas feel a connection with an animal that they have the opportunity to impact in such a large way.

Why border patrol? After reading through our itinerary, you might be wondering why we presented at border patrol. These men and women are often in areas where ocelots roam, places where most people do not have access. Border patrol officers can be a valuable resource in identifying and reporting ocelots for range data and population estimates. Giving them the information to correctly ID an ocelot versus a bobcat (a very similar looking small cat that shares the same range) can mean more accurate reporting. Showing the officers the correct way to report an ocelot as well as the importance of doing so is another advantage of presenting with Sihil. And of course, isn’t it great when our government institutions work together for conservation!

Why all this fuss over a little ocelot? Ocelots are awesome (albeit, we are a little biased) and they are in trouble, especially in South Texas, but that is not the only reason to focus on this species. Aside from all of the positive education and initiation of change for the ocelot, the Ocelot Conservation Festival is about saving an entire ecosystem of plants and animals. The ocelot is what we like to refer to as charismatic megafauna, which is an animal species that has widespread appeal. To achieve conservation and community goals, we highlight the ocelot as the “face” of the South Texas scrub habitat (and let’s be honest, who doesn’t love that face?), and in protecting the ocelot, we are helping to save hundreds of other species of flora and fauna who also share their space.

What can you do to help the ocelot? A lot! First of all, by supporting the Zoo, you are enabling us to participate in conservation events like the Ocelot Festival. You can also directly support ocelot research and conservation by Adopting an Ocelot through Friends of the Laguna Atascosa National Wildlife Refuge. And later this May, we invite you to come out to the annual Cinco de Gato fundraiser held by the Cincinnati chapter of the American Association of Zoo Keepers. Funds raised support FWS ocelot conservation efforts. Stay tuned for more details on the event to come soon.