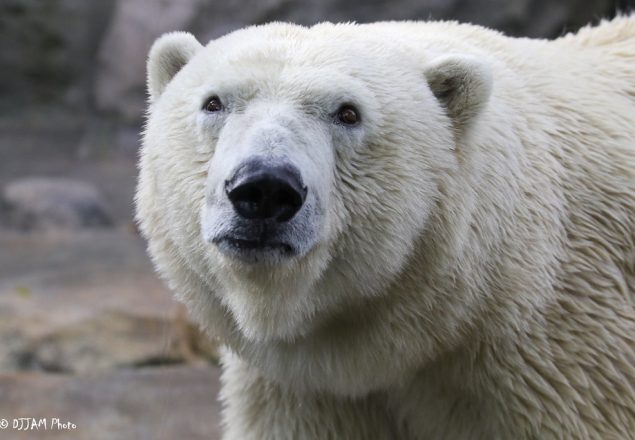 It’s International Polar Bear Day – a day to reflect on the state of polar bears in the wild. Arctic sea ice continues to melt (watch NASA’s time lapse video of sea ice change over the past 30 years), and with it the future of ice bears on Earth remains on thin ice. All the bad news sometimes makes you want to crawl into a den and pretend the outside world doesn’t exist, am I right? 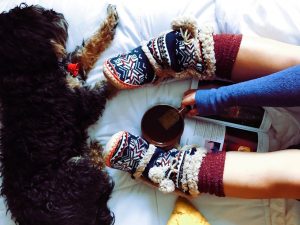 Well, guess what? This is one case where doing just that can actually help save polar bears. That’s right, I’m saying that you can snuggle up in your fuzzy slippers with a fleece blankie on the couch, sipping a hot beverage of your choice, all while doing your part to cut down on carbon emissions by turning down your thermostat. It’s called hygge (pronounced hoo-gah), a Danish word for getting cozy and embracing simple pleasures during colder weather. Polar bears, including our newest resident Anana, certainly get their hygge on, so let’s join them!

Anana, a 16-year-old female, arrived at the Zoo last November and is here on a breeding recommendation from the Polar Bear Species Survival Plan (SSP). She has produced cubs in the past so we’re hopeful that she and Little One, our 27-year-old male, will have cubs here soon. According to her keepers, Anana is settling in well. She enjoys playing with toys such as barrels, boomer balls, tires and fire hose balls, and loves to swim. She’s very inquisitive and does very well with her daily training sessions. Anana and Little One were first introduced in December. The keepers haven’t observed any breeding yet, but we’re all keeping our fingers crossed.

In the meantime, our CREW scientists will continue their research into polar bear reproductive biology and contributing to the work of Polar Bears International (PBI). As an Arctic Ambassador Center with PBI, the Zoo is committed to reducing its carbon emissions to combat climate change and save the sea ice upon which polar bears depend.

One question that often comes up is whether polar bears will be able to adapt to life on land. Polar bear biologist Evan Richardson explains why it’s not likely in this video from PBI.

“The only way to save the bears and their sea ice habitats is to control temperature rise through greenhouse gas mitigation.” – Dr. Steven C. Armstrup, Chief Scientist with PBI 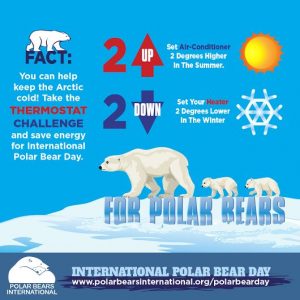 That’s why we are encouraging you to take the Thermostat Challenge. Hygge for polar bears!

And when you do finally emerge from your snuggly den this spring, come and see what Anana and Little One are up to.

4 thoughts on “Anana the Polar Bear Wants You to Get Hygge with It!”