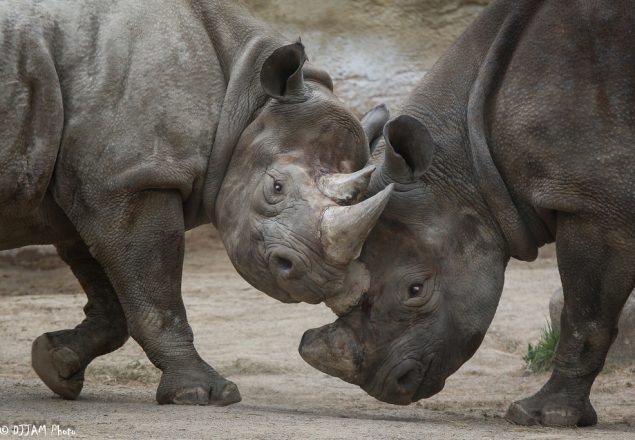 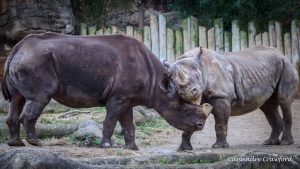 Dating in the world of animals is quite different than that of humans. We have the luxury of selecting potential mates based on physical attraction and common interest. Animal pairings, on the other hand, are mostly determined by genetics. Maintaining genetic diversity is crucial in upholding a healthy population; however, sometimes genetically compatible couples do not breed.  This is where science steps in.  Reproductive experts from the Zoo’s Center for Conservation and Research of Endangered Wildlife (CREW) are currently investigating factors that contribute to the successful pairing and breeding of Eastern black rhinos.  The Zoo’s black rhinos Seyia and Faru participated in this study and are expecting their first baby in summer 2017. 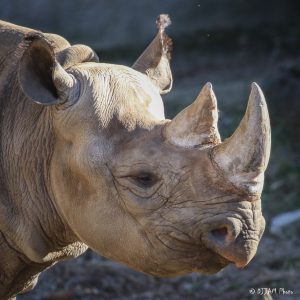 CREW scientists believe that chemical cues (a.k.a. rhino love potion) released in urine and feces play an important role in reproduction. Through a grant sponsored by the Institute of Museum and Library Services, a select group of black rhinos across the US are sniffing different types of scent stimuli.  The scents, some of which are of rhino origin, are placed in custom-made olfactory tubes. Faru had the privilege of testing several of the prototypes. The olfactory tubes are placed in the exhibit, allowing rhinos to investigate each scent, and hormone levels and behaviors are monitored by the CREW staff.  Chemical cues can potentially be used to facilitate courtship, cyclicity, ovulation, and maintain reproductive health during non-breeding conditions. 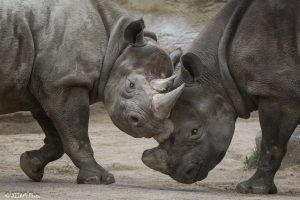 An estimate of only 5,000 black rhinos remain in the wild, making them a critically endangered species.  The main threat to this species is poaching for the international rhino horn trade. Viable captive population and productive breeding programs are important aspect of black rhino conservation.  While flowers, chocolates, and sonnets may work for humans, the secret to baby making in rhinos could be as simple as sniffing a fresh pile of poo.