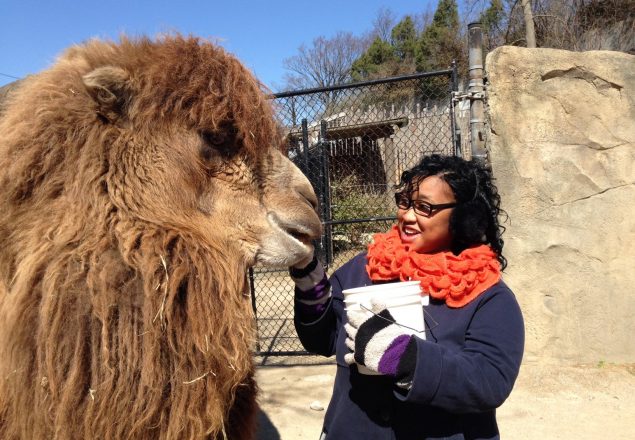 Hello readers and/or commenters, my name is Tymesha Davis and I’m an 11th grade student from Zoo Academy. I want to write about an animal I experienced in my Lab. What’s a lab? As a student I spend time working in different departments at the Zoo. And one of those labs was Wildlife Canyon, which has one of the most interesting animals I know….*Drum roll*…the camel!  Don’t ever try and say that camels are ugly! Because they’re beautiful!

Camels are even-toed ungulates (hoofed animals) that have one or two humps. The one-humped camel, or dromedary camel, is found in the Arabian deserts of the Middle East and North Africa, while the two-humped camel or Bactrian camel, is native to the Gobi Desert in China and the Bactrian steppes of Mongolia.

I’m interested in this animal because of its features: long legs, a big-lipped snout and a humped back. And I love how they use those features. The camels’ humps consist of stored fat, which they can put into use when food and water is scarce.

In addition to their humps, camels have other ways to adapt to their environment. They have a third, clear eyelid that protects their eyes from blowing sand. Two rows of long lashes also protect their eyes. Sand up the nose can be a problem for people, but not for camels. They can shut their nostrils during sand storms. Pretty useful, right?

Camels are very social, even though they might seem extremely laid-back and slow. In the wild, they travel with around 30 others when looking for food.

Humans have used camels as a means of transport for thousands of years. They can carry about 500 pounds (wow!) on their backs, earning these creatures the nickname, “ships of the desert.”  Camels aren’t picky eaters, unlike some human children. Their thick lips allow them to eat things that most other animals can’t, such as thorny plants. Camels are herbivores, though, so you won’t find them eating meat. Filling up on water, when it’s available, is very important for camels. They can drink 30 gallons of water in just 13 minutes. Their bodies rehydrate faster than any other mammal. When there is little food and water, the camel’s hump fat releases water. Camels can survive up to six months without food or water.

Though the two types of camel are found in different parts of the world, they are both found in the desert, prairie or steppe. Though many people think that camels only live in hot climates, they do well in temperature ranges from 20 degrees F to 120 degrees F. Unfortunately, the wild Bactrian camel (Camelus bactrianus) a two-humped ancestor of domesticated camels, is now considered “critically endangered”; it is said that only about 1,000 Bactrian camels remain in the wild. The wild species are hunted by poachers and have declined in number from food deprivation to the higher population of domesticated Bactrian camels, cows, and horses. A further threat to the wild species is cross-mating between domesticated and wild Bactrian camels. The Wild Camel Protection Foundation (WCPF) is the only organization in the world with a specific mission to save this remarkable creature and its pristine desert environment.

I hope that I taught you some interesting things about the camels, and hope that you find them interesting too. Next time you visit our zoo be sure to head on down to Wildlife Canyon to see our amazing camels, Humphrey and Saarai. You might even get a chance to feed them during special encounters.

9 thoughts on “The Awesome World of Camels”