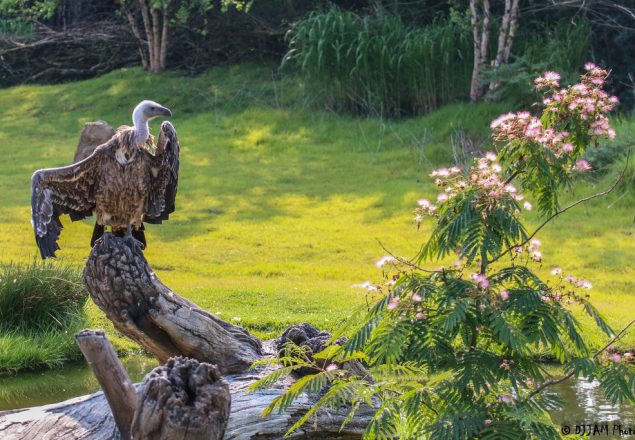 September 2nd is International Vulture Awareness Day, and a great opportunity for us to celebrate some of the Cincinnati Zoo’s unsung heroes, our vultures! The Cincinnati Zoo is home to eight vultures representing four species. Vultures may not always be the prettiest animals to look at, but they play a crucial role in many ecosystems by cleaning up deceased animals and stopping the spread of disease.

Unfortunately, most of the 23 species of vultures are faced with dramatic population declines, and are threatened with extinction. As nature’s cleanup crew, vultures are often caught in the cross fire of other human-wildlife conflict. Some species of vultures, such as the California Condor, fall victim to lead poisoning if they are feeding on the carcass of an animal that was shot with lead bullets. In Africa carcasses are occasionally poisoned by farmers as a form of retaliation against predators who may have taken their livestock. This poisoning can result in the deaths of dozens of vultures. While vultures in the wild still face many threats, there is a silver lining. Breeding programs in zoos have aided in reintroduction efforts for both the Andean and California Condors.

Here at the Cincinnati Zoo our vultures are a favorite of many keepers. With big personalities, and an inquisitive nature, it’s hard not to fall in love with them! By visiting zoos, you have the opportunity to get an up-close look at these fascinating and personable birds.

Here’s an introduction to some of the vultures you may see on your next visit to the zoo: 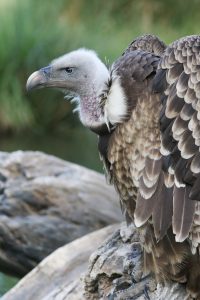 Bubba is hands down the keeper’s choice for best vulture in Africa! Bubba is four years old, and came to Cincinnati Zoo from the San Diego Wild Animal Park. He is extremely inquisitive, and often approaches keepers to see what they have or what they are doing. Bubba loves interacting with his keepers and does great with training sessions. He is our most adventurous vulture and travels over to the island in the savanna exhibit every night. He spends time interacting with the other animals that inhabit the savanna habitat with him. If you swing by the savanna you may see him watching the kudu as he nibbles on browse, or trying to pluck feathers from our ostrich while they take a dust bath. In the wild Ruppell’s vultures are highly social and have been known to live in flocks numbering into the thousands. Ruppell’s Vultures also hold the record for highest flying bird, with one individual being recorded at flying 36,000 feet above sea level! Unfortunately, Ruppell’s vultures are currently critically endangered after experiencing a rapid population decline between 2004 and 2012. Thankfully there are conservation efforts in effect that are helping to stabilize their population numbers. 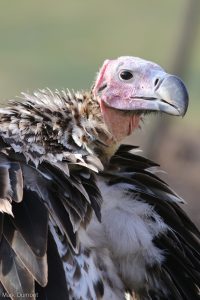 At 18 lbs, Aughra is the largest vulture in the African savanna habitat at the Cincinnati Zoo. Aughra is three years old and came to the Cincinnati Zoo from Dallas along with her older brother, Ishtar. Although Aughra is a great trainer, and very smart, she is wary of change and needs to fully analyze a situation before she decides how to proceed. Lappet-Faced Vultures are the largest vultures in Africa and typically live alone or in pairs. They have powerful bills and are often the last vultures to arrive at a carcass. Their powerful beaks allow them to tear off tough tissue (such as skin and tendons) that are difficult for smaller vultures to feed on. 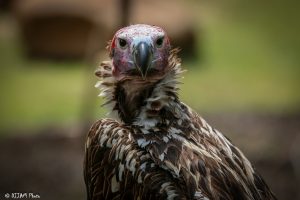 Ishtar is the scaredy cat of the vulture trio in our African Savanna. When he is afraid he will run into a corner and hide under a bush, until he feels like it’s safe to come out. At four years, old he is just on the cusp of adulthood. He has lived at the Cincinnati Zoo for three years and was born at the Dallas Zoo. Although he does have a shy side, Ishtar comes alive during training sessions, and occasionally gets a little overly excited for his food and jumps off his station to catch his favorite treats. While Lappet-Faced Vultures feed primarily on carrion (another name for dead animals) they have been known to perch on termite mounds to feed on termites and other insects. 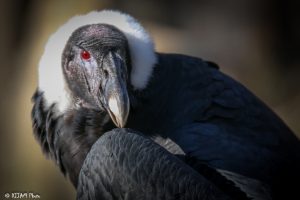 Gryph, the Cincinnati Zoo’s 35 year old male Andean Condor, came to the zoo in 2008 and was born at the Patuxent Wildlife Research Station in Maryland. Like other vultures, condors feed on deceased animals, and Gryph’s favorite is goat! On goat days Gryph is so excited that he will wait at the keeper access door to his habitat in anticipation of his favorite treat! Andean Condors are unique among vultures because the males and females look different, on your next visit to the zoo be sure to check out Gryph’s caruncle (or fleshy head ornament). Inhabiting the Andes Mountains in South America, the Andean Condor is the largest species of vulture, as well as one of the heaviest flying birds in the world. 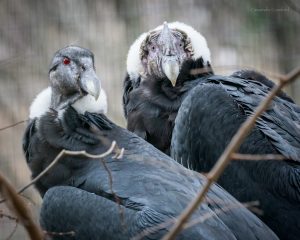 Just like her mate Gryph, Laurel, who is also 35, came to the Cincinnati Zoo in 2008 and was also born at the Patuxent Wildlife Research Station in Maryland. Since her arrival Laurel laid an egg every year that she was at the zoo, unfortunately the eggs never hatched, that was until 2016. After a nest box was installed in 2014 Laurel seemed to have finally found a place that she approved of for rearing a chick, and in 2016 the zoo welcomed its first Andean Condor chick in 30 years! Laurel proved to be a fantastic and protective mother, and would even shield her chick from Gryph at times. 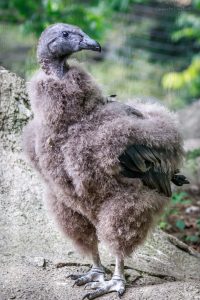 Hatched in 2016, Calar is the first Andean Condor chick to be hatched at the Cincinnati Zoo in 30 years! Andean Condor parents share the responsibility of incubating their eggs, and raising their chicks, and fortunately both Gryph and Laurel proved to be great parents! Just like her dad, Calar’s favorite food is goat, but she isn’t too picky! She gets very excited at feeding times and will dance around out of excitement before settling down to eat. Calar is very inquisitive and will just sit and watch people for hours. Cincinnati Zoo has partnered with other zoos and the Venezuelan National Park System to aid in the reintroduction of Condors to the Andes. Cincinnati Zoo has utilized its off-site facility in the past to prepare birds for release into the wild, and has sent birds to South America as recently as 2013! 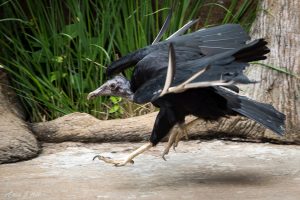 At 26 years old, Boris is a veteran resident of the Wings of Wonder Bird Encounter. Helping to educate and inspire people about wildlife is all in the family for Boris, and has always seemed to come naturally to him. Boris is following the footsteps of his parents and grandparents who were all ambassador animals at Busch Gardens Tampa. While vultures are found all over the world, we are fortunate in south western Ohio to have two native species of vulture, black vultures and turkey vultures! While Turkey Vultures are larger and more common, black vultures seem to be more cunning, as they will follow turkey vultures to a carcass and then push the larger vultures away so that they can eat their fill! 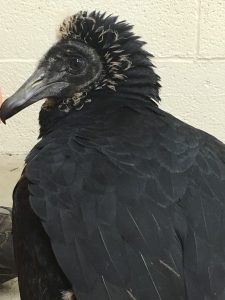 Although his full name is Bernard, his trainers have affectionately dubbed the Cincinnati Zoo’s newest vulture Bernie. Bernie is a goofy and rambunctious star on the rise, who is working hard on becoming the newest full time star at the bird encounter! Bernie arrived at the Cincinnati Zoo last year from the Carolina Raptor Center. Bernie was unable to survive in the wild because he was imprinted on humans, and therefore viewed himself as being a human instead of a vulture. Often times sick or injured wild animals are taken to wildlife rehabilitators to get a second chance at life. Unfortunately, there are times when certain animals are not able to take care of themselves in the wild. In these instances Wildlife rehabbers will often partner with zoos to give these animals an opportunity to act as ambassadors for their species.

8 thoughts on “Meet Nature’s Clean Up Crew – The Vulture”