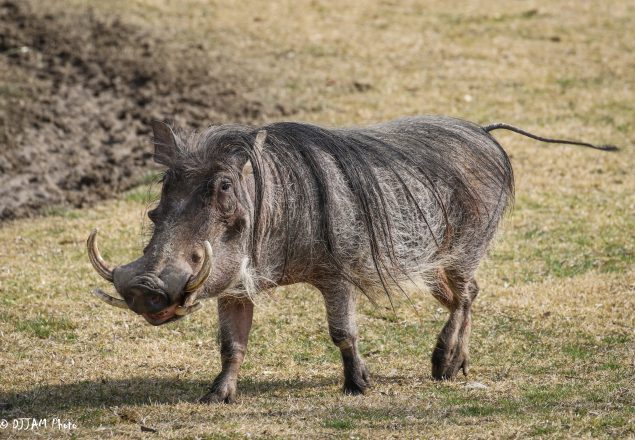 The African savannah habitat is welcoming an exciting new resident, Walter the warthog! In order to set Walter up for success, animal care staff carefully planned how to introduce Walter to the twelve other species that call the savannah home, none of which had seen a warthog before!

Walter has lived at the Cincinnati Zoo for the majority of his life, and he most recently resided in Wildlife Canyon. To facilitate a smooth move to the Africa area, the care staff at Wildlife Canyon trained Walter to voluntarily enter a crate.  His new caregivers also went down to the canyon to visit Walter to make sure he had familiar faces in Africa to ease his transition to his new home. His move went smoothly and Walter was ready to start settling in in Africa!

First Walter needed to learn the lay of the land. He started to get to know the behind the scenes areas, and eventually explored the savannah without other animals in it. Walter loved his new habitat right away! The next step was letting Walter see the other savannah animals behind the scenes. At first there was always a barrier between Walter and the other animals.

Care staff monitored the reactions that Walter had to each of the other animals, as well as their reaction to him. Some seemed really positive, such as those from the lesser kudu and the guinea fowl.

Other animals, including Mike the wildebeest and ostriches Pam and Rose, seemed more wary. Based on this information we allowed some animals more time to check out Walter behind the scenes before moving forward to actually allowing them to share space. This ensures that the experience is as positive as possible for all of the animals involved.

Unfortunately the unpredictable weather that we have had this spring slowed things down a bit, but we took advantage of any warm weather that we had to move forward with introductions. Lesser kudu, Hobbes, and our guinea fowl were the first animals to share space with Walter. He was nervous about sharing space with them at first but quickly warmed up to them. Things went so well that we were able to move forward with introductions behind the scenes when the weather was not quite ideal! After Walter, Hobbes, and the guineas had been in the savannah together a few times we were ready for the next step, adding in the wildebeest, impala, gazelle, and cranes.

This next step was a big one, but after some initial surprise and running around by everyone involved things quickly settled down, and it appears that Walter is starting to fit into the savannah!

This week we added Pam and Rose and were pleased with their reaction to Walter.  When he approached them, Pam stood up to him and did not run away.  Behavior like this is important to let Walter establish his place in the group.

The final step in the introductions will be to add the pelicans, vultures, saddle billed stork, and ruddy shelducks. Be sure to check back later on this spring to see how things are progressing with Walter and the rest of the savannah animals!

2 thoughts on “Walter the Warthog Moves to Africa”