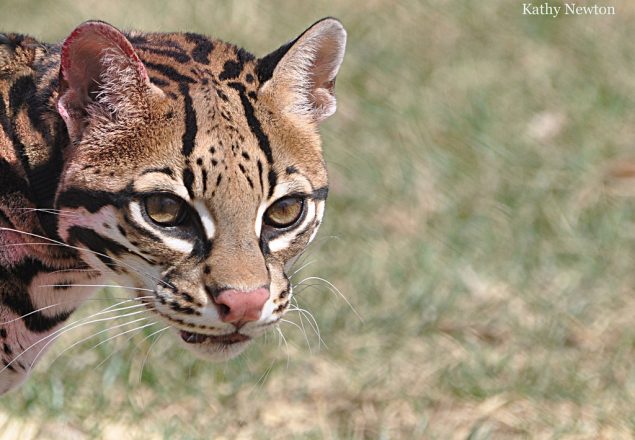 Another year brought another successful Ocelot Conservation Festival in March for the Zoo’s ocelot ambassador, Sihil, and her trainers. As always, superstar Sihil had a jam-packed schedule, spreading awareness about ocelots to the people of South Texas. Check out a quick video clip of Sihil in action. But once the programs, appearances and video streams are wrapped up and Sihil is settled back on the bed in her cat tower here at the Zoo, the educational and conservation impact stays behind!

The annual Ocelot Conservation Festival might be “new news” to some readers, so let me to bring everyone up to speed. The Cincinnati Zoo’s Cat Ambassador Program partners with the U.S. Fish and Wildlife Service (USFWS) and Gladys Porter Zoo to dedicate a weekend every year to celebrating the ocelot. Though predominantly a Central and South American cat, the ocelot also ranges into the United States, once spanning through most of Texas as well as parts of Arkansas and Louisiana. This U.S. population has dwindled in the past century, losing 95% of these unique and feisty felines, mostly due to human encroachment (i.e. habitat fragmentation and loss, car strikes). The festival, which melds fun, family, and even fitness (a 5k fun run) aims to educate and inspire those in the community that have the greatest direct impact on the remaining Texas ocelots.

I have had the pleasure of traveling with Sihil to Texas and have even blogged before, highlighting our journey, itinerary, and experiences in Texas. If you’re interested in just HOW we manage to travel across the country with a ocelot in tow, or WHY we do presentations for USFWS or Border Patrol staff, check out my 2016 blog. This year, however, I want to touch on something different. I want to emphasize just how much influence one 20-pound cat has as an advocate for her species when paired with a few humans working towards the same goal.

During our stay in Texas, we have a schedule full of appearances and presentations. Not only because people love to see Sihil, but because we have a message to spread! On the Saturday of the festival, Sihil is seen by 800 to 900 visitors who attend the educational presentations. And we also see close to 400 people during additional scheduled programming the day before. After 14 years, that means that more than 18,000 people in South Texas have encountered Sihil live and in person!

Add to that the 400 viewers that watched the USFWS’s Facebook Live segment, the numerous students that are now able to access distance learning videos that were filmed, and the people who may have casually caught a glimpse on the TV and print news spots that featured Sihil. She’s had quite an impact in helping to share important information about what people can do to help protect her species.

Zoos inspire and relate people to the world around them. We have all felt that special magic when you make a connection to an animal you see at a zoo or nature center, but what does it look like when you quantify that magic? Oone well-known paper written by K. Povey and J. Rios (2002) found that the use of ambassador animals accompanied by information delivered by an interpretive presenter holds people’s attention over three times longer than presenting information without the presence of an ambassador animal. And people take away more cognitive than just simple observational information. Instead of just recalling that they saw the animal and what that animal was doing, people take away more facts, complex thoughts and feelings, and are possibly even inspired to consider how their life can impact the species by interacting with an ambassador animal! They also noted that people were 20% more likely to seek more information about what they learned if they had the opportunity to encounter an ambassador animal. With an end goal of informing people, fostering a connection, and inspiring change, studies like this reaffirm that ambassador animals like Sihil make a HUGE impression. (Reference: Povey, K.D. & Rios, J. (2002). Using interpretive animals to deliver affective messages in zoos. Journal of Interpretation Research. 7. 19-28.)

An Intrigue of Our Own

Of the 150 of people surveyed, we found that 73% of them had never seen a live ocelot before the event and 30% of them had not realized that ocelots actually live in Texas. Were they inspired to take action in some way to help save ocelots? They sure were; 90% said they would do something to help, such as watching out for ocelots on the road, restoring habitat, donating money, volunteering, and sharing information with others.

While this survey focused on the impact of the event as a whole rather than just on Sihil’s presence, the numbers show that Sihil is contributing to an event that is successfully reaching the people of South Texas in a way unparalleled to anything they had experienced before. I think we would all call that a WIN!

Raising Funds to Help Ocelots is No Funny Business 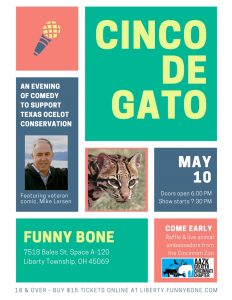 Want to see Ambassador Extraordinaire, Sihil, yourself? We have an opportunity coming up for you to do just that while also helping to support ocelot conservation. Join us for our Cinco de Gato comedy show fundraiser, which will be held at the Liberty Funny Bone on May 10. Hosted by the Greater Cincinnati Chapter of the American Association of Zoo Keepers, this 18 and older comedy show will feature veteran comic, Mike Larsen. But before he takes the stage, Sihil will make an appearance of her own around 6:30PM. Doors open at 6:00PM; show starts at 7:30PM. Tickets can be purchased online here. A portion of the proceeds from ticket sales will go towards Texas ocelot conservation. Come have a few laughs for a great cause!