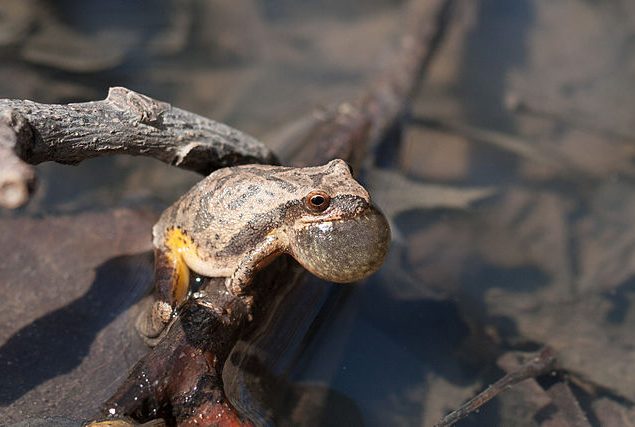 Spring peeper, northern leopard, eastern spadefoot – these all may sound like rock band names, but they are actually names of native frogs!

Frogs and toads are both predators and prey in aquatic and terrestrial ecosystems. They are very sensitive to changes in their environment and are indicators of problems that can also affect human health. Many previously abundant populations have experienced dramatic population declines – in the United States and around the world. It’s essential that we understand the scope, scale, and cause of these declines to not only help frog and toad species, but improve the health of local wetlands.

The Cincinnati Zoo Family Community Service (FCS) group recently came together to participate in FrogWatch. FrogWatch is a citizen science program that collects data reported by people just like you and me, to scientists. Those scientists are working to understand why frog and toad populations are declining and how to help them.

The FCS volunteers met at Bowyer Farm in Mason, Ohio one evening in April to observe and listen to frogs and toads. Led by a group of Cincinnati Zoo and Miami University herpetology experts, volunteers divided into three groups to trek the Bowyer wetlands in search of frogs. Adhering to a specific FrogWatch protocol, once the groups were in a location they turned off all lights and intently listened for different frog calls. Volunteers also spotted several varieties of frogs in their natural habitats. Some of the frog species seen were spring peepers, northern leopard frogs, and American bullfrogs.

The loss of wetlands and other frog habitats because of industry and human population growth is one of the biggest causes of amphibian decline. The increase of roads has been hard on migrating frogs, too. When frogs try to cross a busy road or highway in search of their breeding pools, cars usually seal their fate. Nonnative species like trout, and even other frogs that humans introduce, often eat native frogs. There are also pollutants that seep into rivers and ponds and can kill frogs and tadpoles. Not only are frogs and toads vital to the balance of a healthy ecosystem, but they keep insect populations under control. And, they directly benefit humans by eating insects that can be pests and transmit diseases.

We want to give a special thanks to our Cincinnati Zoo herpetology experts, Ryan Dumas and Jenna Lamping, as well as Miami University scientists, Courtney Dvorksy, Miranda Strasburg, and Olivia Wetsch.

To learn more about FrogWatch and submitting your own data, click here.