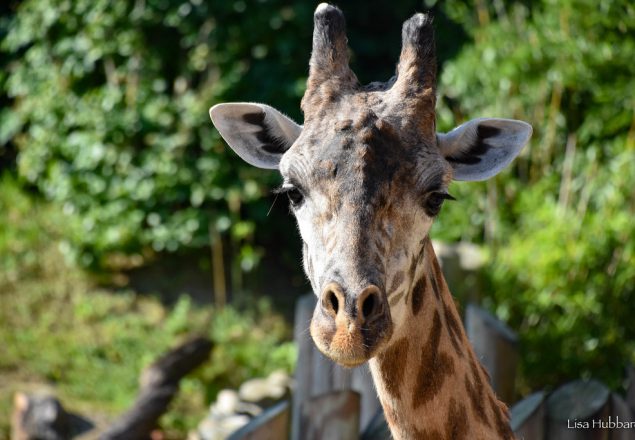 Fennessy the Masai giraffe calf, born in June of this year to parents Kimba and Tessa, is for sure one of the cutest animals you’ll see at the Cincinnati Zoo on your next trip. And eight-year-old giraffe mama Cece is expecting her second calf this November, so there will be even more baby giraffe love coming to the Queen City.

Giraffe births in zoos are always important and celebrated, supporting the Association of Zoo and Aquarium’s (AZA) Species Survival Plan for giraffes and building up the species population.  But the Cincinnati Zoo’s giraffe breeding program is even more important than ever, after the International Union for the Conservation of Nature (IUCN) declared last month that the Masai subspecies is officially endangered.

The Masai subspecies of giraffes lives in Kenya and Tanzania, and due to habitat loss caused by agriculture, as well as hunting and trapping of giraffes by humans, there are now only an estimated 35,000 left in the wild.

The protection of each species is important, according to Teresa Truesdale, primary giraffe keeper at the Zoo. “Supporting one of the largest animals in Africa, like the giraffe, means smaller animals living in the same habitat are all supported and protected as well,” Truesdale says. “The loss of one species can cause the collapse of an entire ecosystem. All animals and humans are connected in one way or another and it is vital that we care about species living all over the world, not only because all species matter, but because the loss of megafauna like giraffe can ultimately affect this side of the world in the long run. We should all get in the habit of making better choices on a daily basis for the future of our planet as a whole.”

What can we do to help? Supporting the Zoo is one way to help. The Zoo’s giraffe breeding program builds up the global giraffe population by following the AZA’s Special Survival Plan (SSP) recommendations, which are based on genetics to ensure a diverse and growing species population. Truesdale says that along with the calves born at the Zoo, this has also included transferring animals to other zoos to support their breeding programs, as well.

And finally, you can support the Giraffe Conservation Foundation, which is involved in giraffe conservation initiatives in 15 African countries. You can donate, buy a t-shirt, or just sign up for their email updates to stay on top of what’s happening. Plus, the GCF was founded by giraffe conservation expert Julian Fennessy, who is Fenn the calf’s namesake!

“Fennessy is the first male calf born at Cincinnati Zoo in recent years,” Truesdale adds proudly. “He is growing so fast, has gained over 100 pounds, and is a foot taller than he was at birth. He is super friendly and regularly approaches his keepers. And, at just 2.5 weeks old he took browse from guests at our behind-the-scenes area, which is pretty uncommon because calves are typically shy!”