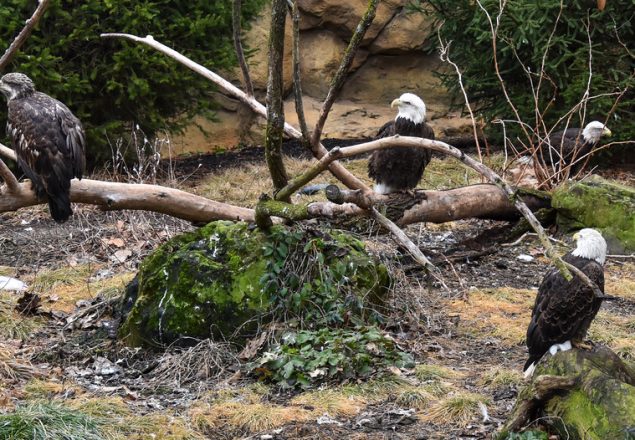 All of the bald eagles at the Cincinnati Zoo & Botanical Garden are rescues who were injured in the wild and are unable to be released.  The Zoo provides the eagles with a safe place to live and allows guests to see the majestic birds up close.

The Zoo currently has four bald eagle residents in the new habitat, finished in 2018.  The Zoo’s youngest bald eagle, Griffin, was rescued in August 2017 by Veterinary Health Department of the Tulsa Zoo.  Griffin had been injured in the wild and had a slight droop to the right wing.  X-rays showed that the wing had an infected fracture.  Because bird bones are hollow, breaks and fractures can be extremely difficult to align and heal correctly.  The fracture had begun healing incorrectly in the wild, and the wing was not properly aligned.  Griffin was treated for his infection, but he was unable to regain sustained flight even after four months.  Without being able to fly, Griffin would not be able to survive in the wild.

Thankfully Griffin was able to find a home at the Zoo.  You can still tell Griffin from the other eagles because his head is still brown. Bald eagles don’t get their white head feathers until they are about four or five years old; Griffin is about three.  Griffin was quickly accompanied by Klaus, an adult male bald eagle.  Klaus was rescued by the Avian Reconditioning Center in Apopka, Florida.  He was also unable to be released to the wild due to injuries to his right wing.

This past year the Zoo had two adult females join the bald eagle group.  Females are usually larger than males, although there is a lot of variation as well.  An adult female, Irene, joined the group from the Memphis Zoo.  Irene’s right wing was also injured and had to be amputated past the elbow.  The Zoo’s final Bald Eagle, Carla, arrived in December 2019.  Carla was in a territory fight with another Bald Eagle in Polk County, Florida.  Because of her nearly white head, staff suspect she is about five years old.  She is the only bald eagle at the Zoo with sustained injuries to her left wing.

And of course, guests can see Sam the bald eagle at the Wings of Wonder Bird Encounter at the Zoo during summer months.  Sam was found injured when he was only four months old and came to the Zoo in 2003.  Although Sam cannot maintain flight for long distances, he can soar from a high point to a handler’s glove below.  Sam also famously makes appearances at select Cincinnati Reds and FC Cincinnati games.  Hear more of Sam’s unique story here.

The Cincinnati Zoo & Botanical Garden continuously works to educate the public about our national symbol and to protect vital bald eagle habitat.  The Zoo has restored prairie and wetland habitat at the Zoo’s 600-acre Bowyer Farm in Mason, Ohio and supports RAPTOR Inc, a local non-profit raptor rescue and rehabilitation center.  RAPTOR Inc is able to release over half the birds they rescue back into the wild.  Those that cannot be released to the wild find forever homes in places like the Zoo.  You can help our local birds by volunteering with the Zoo’s family community service program to help build a better home for wildlife, or by putting up a birdhouse or birdfeeder.