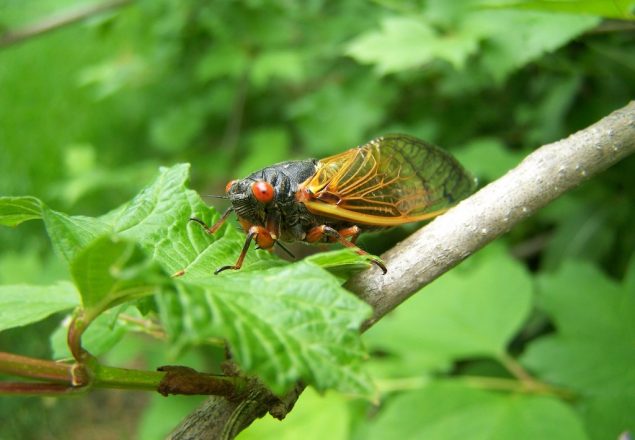 Making my way toward the front of the schoolbus, I hoisted my backpack onto my shoulders and braced myself for the noise. The bus doors folded open, and as I stepped down onto the pavement, the cacophony of tiny voices enveloped me from all sides. It felt like the trees were all screaming in unison, deafeningly loud, dulling the hiss and groan of the bus pulling away from the curb. I couldn’t stop the smile coming to my lips as I climbed our driveway up to the large crabapple tree, where thousands of large, winged insects greeted me with a raspy, chittering chorus. For the first time in 17 years, the Brood X cicadas had emerged from their long subterranean slumber to engage in one of most fascinating mating events North America has to offer, and I was happy to welcome them.

I spent those few weeks in the summer of 2004 happily watching the cicadas fly from tree to tree, bumping into things (and sometimes people) along the way. I relished the chance to handle and photograph them when I got home from school every day, and gathered a jar full of the eerie shed exoskeletons (called “exuviae”) the cicadas left on the trees when they emerged from the ground. For a kid who was extremely excited about bugs, it was the time of my life, but not everyone around me felt the same way. With their Halloween-inspired coloring and googly red eyes, the cicadas unfortunately came off as pretty intimidating. I heard horror stories from people who were having harrowing run-ins with the cicadas, feeling one crawling up their pants leg while driving, or getting one trapped in their hair where it buzzed and chittered until it was frantically dislodged. My father had his own uncomfortable experience when he stepped outside and yawned, and his open mouth became a temporary respite for a cicada who seemingly mistook him for a tree. Even the most diehard bug enthusiast would understandably be startled or even grossed out by such an encounter. But even then, I was adamant that the cicadas were innocent victims of their own clumsiness.

While knowing that cicadas are completely harmless won’t stop them from startling you when they fly into your face, it might help to calm fears and uncertainties about what could happen when you encounter one. I’m here to reassure you that the worst experience you will ever have with a cicada is a jump scare.

Can they hurt me?

One of the easiest ways to tell that cicadas are harmless is to look at how they are built. Insects that are built for hunting or defending— such as wasps, bees, and some beetles— have very specific characteristics that make them fit for the job. Stingers are a great way to keep predators from eating you, and sharp fangs or pincers are useful for grabbing and immobilizing prey. The cicada is neither hunter nor defender, and has none of these features. Looking at their head, they have no biting mouthparts, but rather a long tube-like appendage called a beak that allows them to suck up plant juices like a straw. Humans are not on the menu, and even a curious taste-test with this beak is very unlikely. Their legs might feel a little pinchy or scratchy if they land on you, but only because those little feet are meant for clinging tightly to trees. You might occasionally see a pointy appendage protruding from the end of a female cicada that looks an awful lot like a stinger, but rest assured, this is just her ovipositor, the organ that allows her to lay eggs in tree branches. She cannot use her ovipositor like a stinger, and why would she? Humans make terrible egg incubators!

Cicadas are the ultimate prey because they have virtually no defenses. When I witnessed Brood X in 2004, I also noticed birds so fat they couldn’t fly, and raccoons and squirrels so bloated they could only waddle slowly around the yard. The only reason cicadas survive is because of their “strength in numbers” tactic. Because so many of them emerge at once, their predators cannot possibly eat all of them, and enough will survive to mate and lay eggs that will hatch into the next generation of Brood X.

Can they spread disease? 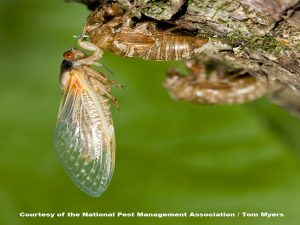 The kinds of insects that can spread disease to humans share some very particular behaviors that make them such good disease vectors. Bugs that can spread bloodborne diseases— such as mosquitoes, ticks, and fleas— exchange parasites and viruses when they suck the blood of humans or other animals. Critters like flies can pick up some nasty pathogens when crawling around in dead animals and feces looking for food and breeding grounds, and can pass them to us when they land on our food or kitchen surfaces. Most other bugs don’t share these behaviors, so they’re very unlikely to spread any diseases to us. Cicadas spend 17 years deep underground eating nothing but tree sap, and then a few brief weeks exclusively up in the trees where they are very unlikely to come into contact with any contaminated material. They’re about as likely to make you sick as a butterfly or lightning bug— that is to say, extremely unlikely.

What happens if my pets eat them?

Any dog owner knows that most dogs will try to eat just about anything at ground-level at least once. If your dog or cat is a curious backyard scavenger or hunter, they will likely eat their fair share of cicadas this summer. The good news is, they’re (mostly) delicious and nutritious! Packed with protein and described as having a shrimp-like flavor, it’s no wonder animals love to eat cicadas. However, vets warn that while cicadas contain no toxins or diseases, their crunchy bodies can be hard to digest and irritate your pet’s stomach, which may cause them to vomit if they eat too many. The rigid wings and legs also pose a choking hazard, especially for small pets. On rare occasions, pets might be allergic to cicadas, the way people can be allergic to shellfish. Also, if the cicadas have been heavily sprayed with pesticides, they could cause pesticide poisoning, which requires emergency veterinary care. A few cicada snacks for your pets are almost inevitable, but it’s best to try to keep them from making a habit of it.

Will they damage my property?

One to two inches long and arriving in huge numbers, it’s easy to worry about the impact cicadas could have on your house or property, but the only mess you should encounter is the smashed bugs on your windshield and walkways. Adult cicadas emerge from their 17-year underground retreat with one goal in mind: find a mate. This single-mindedness keeps them pretty occupied during their brief adult lives, so they don’t have time to vandalize your house or garden. When they dig their way to the surface, they will cause temporary, aesthetic damage in the form of small mounds of dirt around the bases of trees, but this does not harm the trees and the vegetation will fill in the empty spots quickly. Because the cicada nymphs stock up on nutrients while underground for 17 years, they don’t do a whole lot of eating when they emerge as adults. They do use their beaks to pierce tree bark for an occasional snack, but they kindly plug the hole left behind with a sticky spitball to keep the tree’s sap from continuing to flow, like putting a bandage on a papercut. Luckily for us, they are not interested in smaller plants, so your flowers will be fine. You may see cicadas sitting on other plants, but they’re just resting their wings while scoping out the area for mates. The only real damage to trees comes from the female cicadas cutting small slits in the ends of tree branches in which they lay their eggs. Even in such large numbers, this damage is not enough to permanently damage trees; in fact, it actually benefits the tree by giving it a good pruning, encouraging the tree to grow more vigorously. The only thing you need to worry about in your yard is any small, young trees. If you have small fruit trees or are putting in new ornamentals this year, the damage may be too much for them to handle. You can easily avoid this issue by covering tender trees with cicada netting (available at most home improvement stores and online) and delaying the planting of new trees until after the cicadas are gone.

When and for how long can I expect to see cicadas?

Brood X usually emerges in April and May, depending on the weather. In order to trigger the cicadas’ instincts, the soil 8 inches below the surface must reach a consistent 64°F. This means that southern states will start seeing cicadas sooner than those of us further north. Here in Cincinnati, we usually see them around the first week of May, but with the right conditions, we could see them as early as late April. Once a warm rain coaxes them from the ground, they will spend four to six weeks (again, depending on the weather) calling, mating, and laying eggs before the adults die, ending the cicada spectacle until 2038.

How loud will they be?

Very! This may be the most disconcerting aspect of the periodical cicadas, especially for those with sound sensitivities. The collective chittering, droning call of the male cicadas— produced by vibrating specialized organs on their sides called tymbals— can reach up to 100 decibels. That’s about as loud as standing next to a lawnmower or motorcycle, or a plane coming in for a landing. If you or your children have a sound sensitivity disorder, you may want to consider the use of earplugs or noise-cancelling headphones when heading outside.

If they’re not harmful, could they actually be beneficial?

Believe it or not, the arrival of the 17-year cicadas is a time of celebration for all of nature. The burrowing and emergence of the cicada nymphs aerates the soil, increasing the ability of plants and trees to absorb essential nutrients. They are valuable food sources for many animals, reducing competition for food and boosting populations for the year. Even humans sometimes eat cicadas, like the Native American Onondaga people who relied on cicadas to survive when their crops were burned. When the cicadas are done pruning the trees, their dead bodies become food for scavengers or decompose, returning vital nutrients to the soil to nourish the trees their offspring will feed from. Their entire lives— the birth of nymphs in the tips of tree branches, their harrowing fall to the ground, 17 years of burrowing and feeding on sap, and their dramatic emergence— contribute to a beautiful cycle of rebirth for all of nature. This year, instead of dreading an insect plague, try to view Brood X from the perspective of Mother Nature. It won’t prevent the occasional startling run-in with one of these clumsy fliers, but it might just help you reframe that minor inconvenience into a great memory and amusing story you can tell people about the time you survived the 17-year cicadas.

5 thoughts on “Keep Calm and Cicada On: Brood X is Coming!”