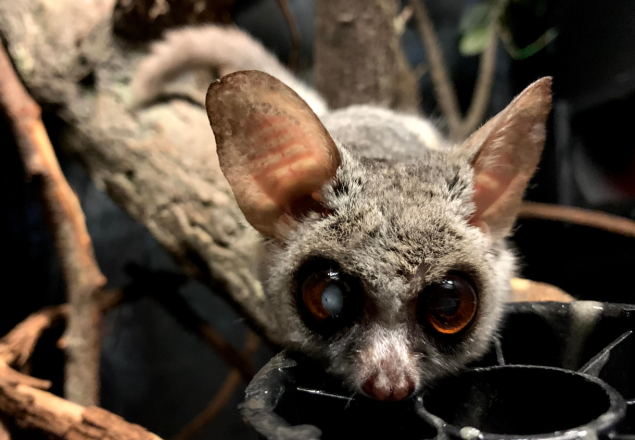 Iris, an 11-year-old female Moholi Galago, had both cataracts removed from her eyes by Dr. Vanessa Kuonen Cavens at MedVet on September 30, 2021.

Iris came to the Cincinnati Zoo in 2020 from another Zoo. She already had one cataract when she arrived, and up until recently, it didn’t seem to impact her at all. She was able to maneuver around her habitat, participate in training, and even grab tiny individual mealworms with accuracy.  It wasn’t until recently that keeper Faith noticed some depth-perception and hand-eye coordination issues during daily training sessions. Another of the important reasons we work with our animals daily!

She recently started developing her second cataract, and because we were able to identify that early she was able to get the surgery to remove both before they affected her more. Keeper Faith’s observation was really what changed the conversation because the team started to see how it was actually starting to impact her vision. Now that her cataracts are removed, Iris is able to participate in training again, and thrive with her mate Screech, and their potto roommate! The surgeries on both eyes were a success and, after recovering for a week and receiving medicated eye drops as post-operative care, Iris is now back on habitat in Jungle Trails and she is doing well!

“It was a wonderful collaborative team effort working with an animal the size of a tennis ball,” said Cincinnati Zoo veterinarian Dr. Greg Levens. “And, the cataracts are gone!”

Moholi bushbabies are from Southern Africa and live in the savanna woodlands. They communicate non-verbally through “urine washing,” in which they douse their hands and feet with urine to mark their territory. They are small primates with grayish-brown fur that is lighter on their limbs and trunk and they use their oversized ears and eyes to detect both predators and their insect prey. Their long tails help with balance as they jump from tree to tree, propelled by long back legs ideal for vertical climbing and leaping. Nocturnal, they spend the day nesting in tree holes, often packed with multiple individuals, to hide from predators, such as large birds, snakes, and mongooses.

Make sure you visit Iris and Screech in Jungle Trails on your next visit!

2 thoughts on “Fresh Outlook for Iris”