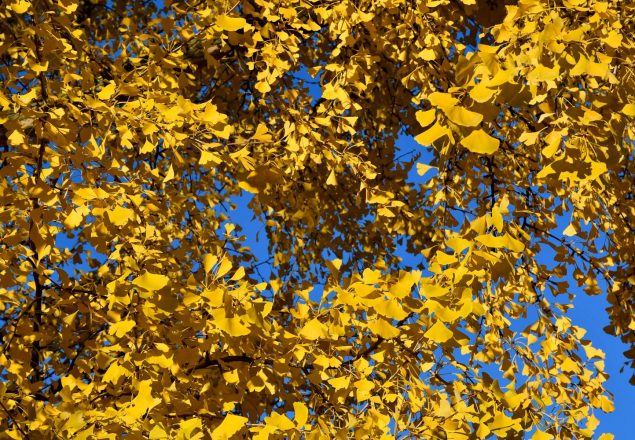 This past week I had the pleasure of giving my first face-to-face plant presentation since February 2019 at the Cincinnati Zoo and Botanical Garden. The Cincinnati Zoo and Botanical Garden was founded in 1873, and the original design called for the intermingling of plants and animals instead of them being cordoned off into different areas. Before we arrived, I had assumed that fall color would be a thing of the past, but I was thrilled to see we were still trees holding onto their leaves. And, the horticulture was excellent with many appropriately planted specimens reaching good size and good labelling. My presentation was on woody trees and shrubs, and I scurried around the garden looking for excellent specimen photos to add to future talks. I wanted to share a few of my favorites with you.

Ginkgo biloba was in its full glory. Throughout Cincinnati, I saw numerous large specimens draped with gold. I admired this subtle contrasting combination between the foreground tree and the closer Hydrangea quercifolia ‘Pee Wee’. 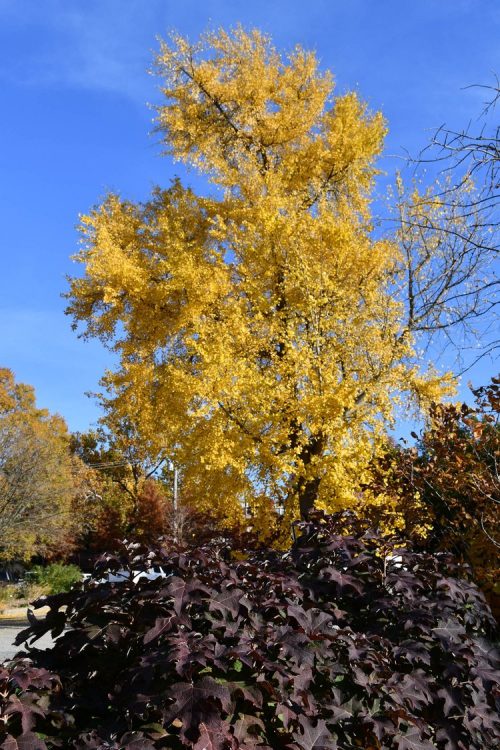 Fallen art from a Ginkgo 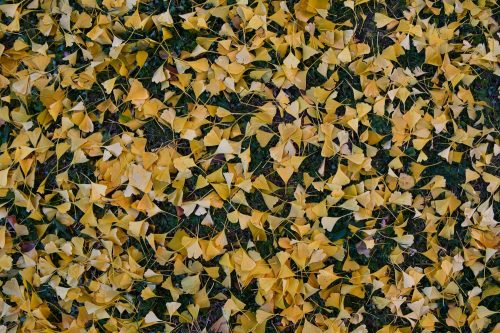 Karen enjoys having fun with fallen Ginkgo leaves. This shot is one we recreate frequently when she finds good quality leaves of any tree on the ground. Fothergilla major ‘Blue Shadow’ colors up quite well in fall. 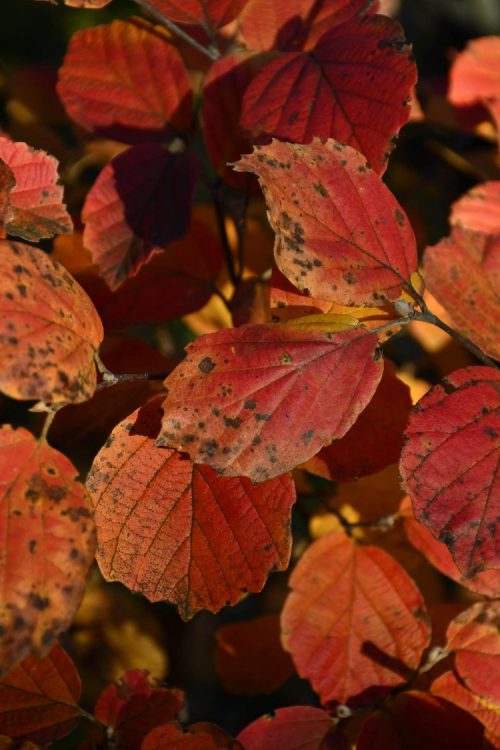 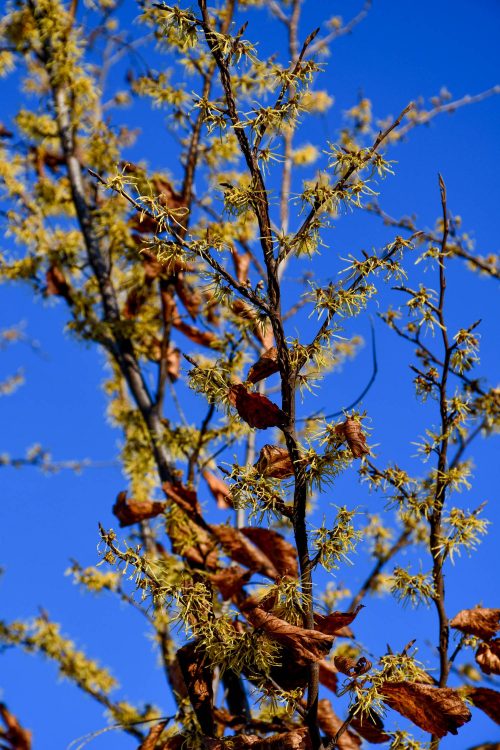 In the main part of the garden, trees were still showing spectacular fall color. These Acer rubrum ‘October Glory’ are some of the best I’ve ever seen. Another tree that was blazed red was Quercus coccinea. It’s a great native oak and one of the best for red fall color. 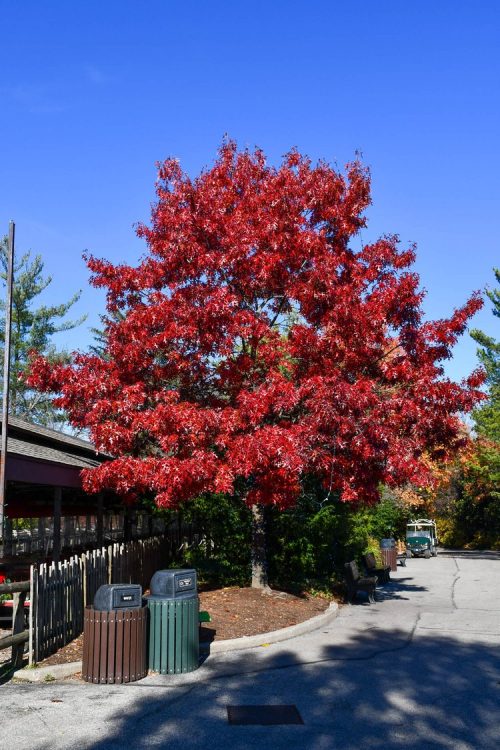 Viburnum × burkwoodii ‘Mohawk’ was another plant sporting beautiful red foliage. It was released by the US National Arboretum in 1966 and has lovely pink buds that open white in the spring. 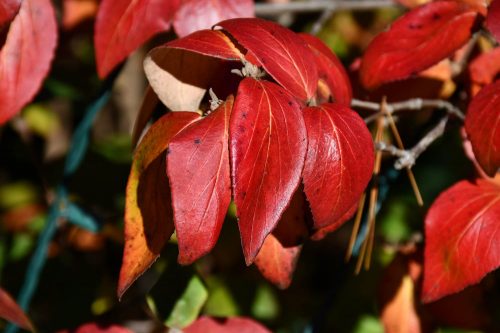 This photo is similar to the one above, but here you can see the effect of the leaf above shading the lower leaf from sunlight and mostly preventing the production of anthocyanin, the compound that gives leaves their crimson color. This observation is one of the reasons I believe that the red pigment is produced to aid with managing solar radiation instead of discouraging pests. 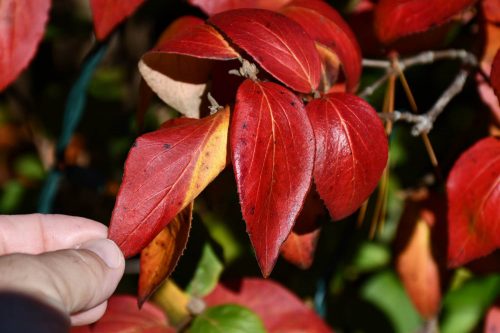 Sorbus alnifolia held its beautiful pink fruit amongst fading foliage. While I’ve read where it can grow 50 feet tall, I think I’d rather have the branches closer to the ground to appreciate these peachy pomes. Diervilla is an underutlized native shrub that grows in a few scattered counties throughout the southern Appalachians. Seeing the fall color on cultivars like Diervilla rivularis ‘SMNDRSF’ Kodiak® Black is sure to increase its popularity. I also admire the species’s quaint yellow flowers in the summer, and the foliage on this cultivar is darker during the growing season. Light beams through the stained glass leaves of Parrotia persica. I thought I would see more hints of red in them, but the specimens I saw were a clear yellow. Magnolia macrophylla gives a whole new definition to the meaning of leaf litter. Some of these leaves are bigger than sheets of paper. As a naturalist I was so touched and saddened seeing the memorial to Martha, the last Passenger Pigeon that died at the Cincinnati Zoo and Botanical Garden in 1914. I remember reading in Aldo Leopold’s A Sand County Almanac, “Men still live who, in their youth, remember pigeons; trees still live that, in their youth, were shaken by a living wind. But a few decades hence only the oldest oaks will remember, and at long last only the hills will know.” I’m a sucker for crabapples since we really can’t grow them well in the south. Here the fruit of ‘Bob White’ Malus brightens a dingy sky. 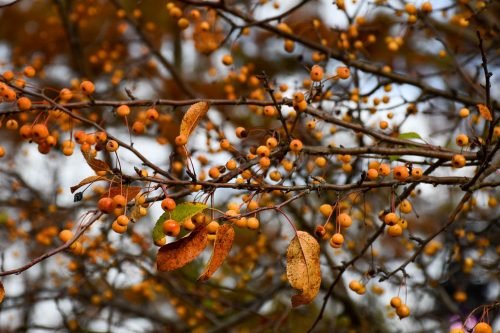 One of the best and largest Cotinus obovatus I’ve ever seen was at the front entrance to the garden. It was absolutely glowing on this cloudy afternoon. 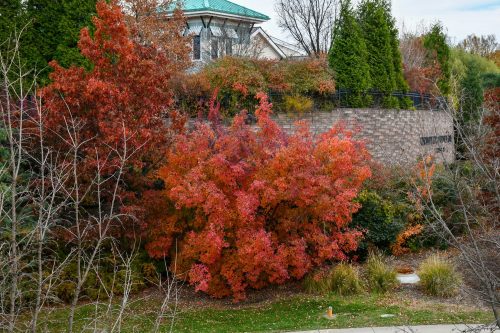 Before we left I had to see the massive solar panel array in the parking lot. What a clever idea to make more use of pavement! The 6400 panels provide around 20% of the park’s energy. 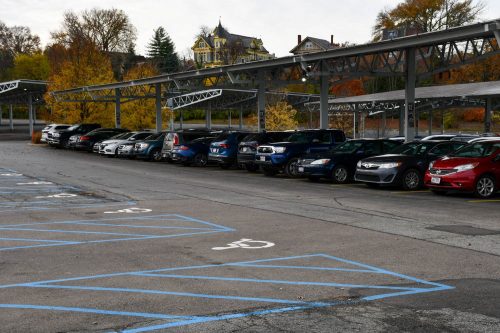 One final shot of Carol Reese, an early mentor of mine who also gave talks Friday, yours truly, and Karen standing in the Under the Sea section of their Christmas light festival. Don’t you just love the jellyfish? 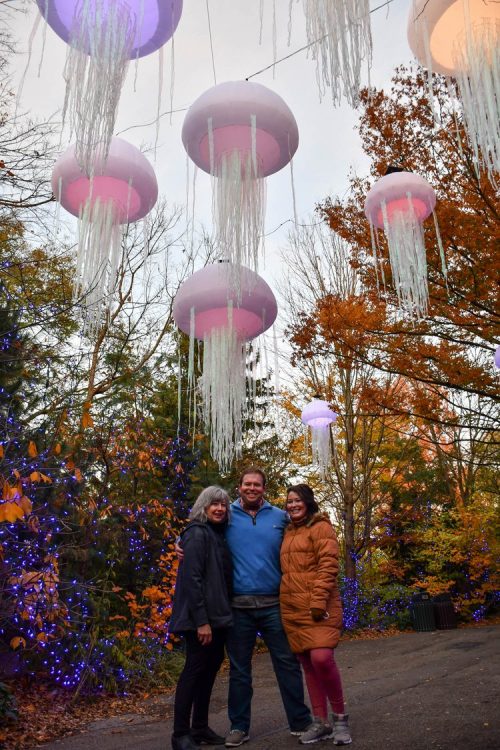 2 thoughts on “Fall Color at the Cincinnati Zoo & Botanical Garden”