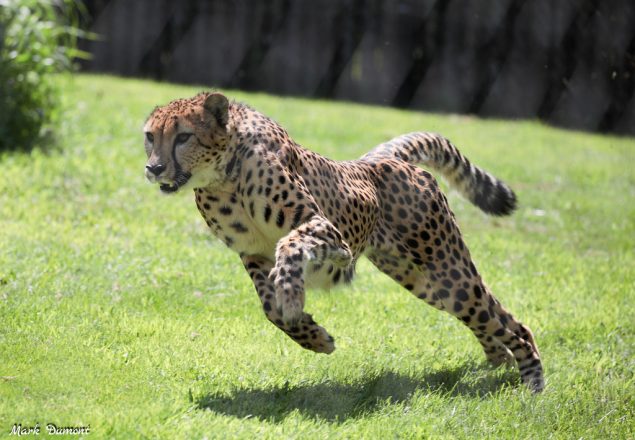 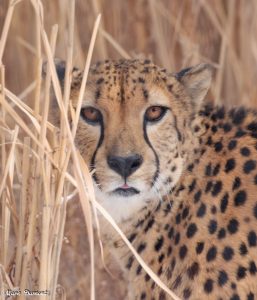 Happy International Cheetah Day! It’s time to celebrate and spread awareness about the world’s fastest land mammal. The cheetah earned this record by reaching speeds of 70 mph in just a few seconds! These spotted cats are native to the savannas and tall grasslands of Africa where it is easy to camouflage while prowling for prey. Cheetahs are carnivores, meaning that their diet consists of small antelopes, gazelles, and duikers.

International Cheetah Day was created in 2010 by Dr. Laurie Marker, the founder of the Cheetah Conservation Fund (CCF) in memory of the birthday of a cheetah named Khayam that she had raised from a cub. Dr. Marker founded the CCF because, while traveling in Namibia, she witnessed the human-wildlife conflict between predators and livestock farmers that often resulted in the persecution of wild cheetahs. Thankfully, through farmer outreach and the livestock guard dog program, the CCF was able to reduce human-wildlife conflict and, today, Namibia is home to the largest population of wild cheetahs in the world. To get more information and the history of cheetah conservation and CCF please visit www.internationalcheetahday.org. 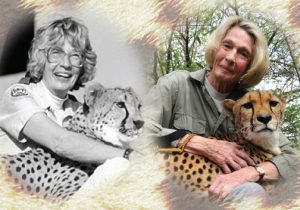 The Cincinnati Zoo & Botanical Garden has strong ties to the foundation of the Cheetah Conservation Fund and our own great legacy with cheetah conservation thanks to the great Cathryn Hilker. When Laurie Marker needed a down payment for the CCF’s first 18,000-acre farm, Cathryn and her husband provided the funds. Cathryn’s impact on conservation education has even deeper roots running through the Cincinnati Zoo. Before starting the Cheetah Ambassador Program (CAP) in 1980, Cathryn helped establish the Zoo’s outreach programs, understanding that forming connections between people and wildlife was important for conservation. 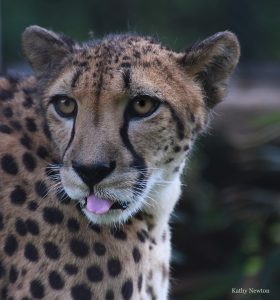 Cathryn started The CAP program was to inspire the public with in-person cheetah encounters while raising awareness of the challenges they face in the wild.  Cathryn began with her first cheetah ambassador, Angel. Cathryn and Angel went around the city and visited the area’s schools spreading awareness. After the passing of her beloved Angel, 1992, The Angel Fund was created to raise funds to support a variety of cheetah conservation projects both in human care and in the wild. The Angel Fund and other Cincinnati Zoo & Botanical Garden conservation initiatives have since contributed more than $1 million to cheetah conservation in not just Namibia, but also Tanzania, Mozambique, Botswana, South Africa and even here in Clermont County, OH where the Zoo has an off-grounds cheetah breeding facility. This facility, known as the Mast Farm, has contributed to the birth of over 60 cubs since 2002. 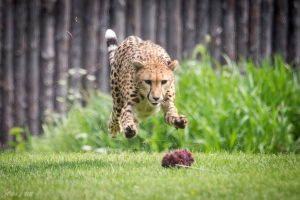 The Cheetah Ambassador Program has come a long way from its founding. It has always been a groundbreaking program from being the first program in the world that showed visitors cheetahs running ability by lure course to now reaching over 1 million guests annually with in-person or virtual educational programming! The CAP has also expanded beyond just Cathryn’s beloved cheetahs to include a Red River hog, African servals, a Cape porcupine, ocelots, as well as domestic dogs and cats. Thanks to Cathryn and her vision, the Cincinnati Zoo is still a powerhouse in cheetah conservation efforts. 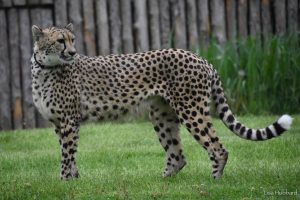 To learn more about the Cincinnati Zoo & Botanical Garden’s cheetah conservation efforts, visit our website, come visit our cheetahs in their habitat, or catch them at the Kroger Cheetah Encounter between April-October.