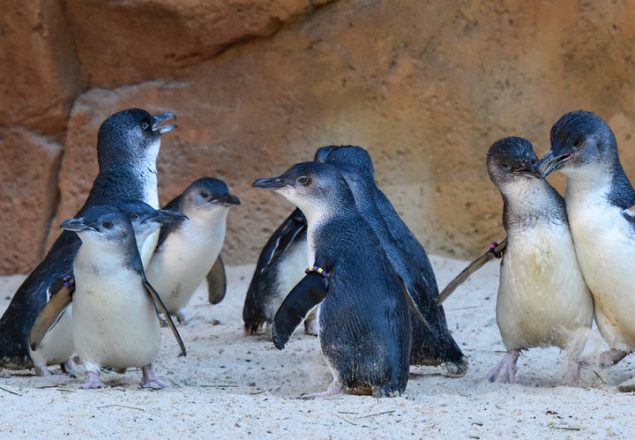 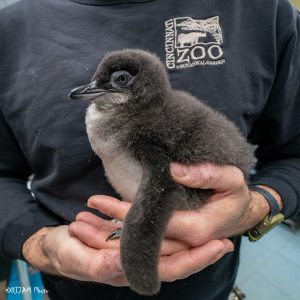 For this Penguin Awareness Day, we’d like to share all about our new baby in blue. On December 13th, the Cincinnati Zoo & Botanical Garden welcomed our newest Zoo chick, a little blue penguin. Weighing in at only 30 grams, meet Rose! To honor Betty White’s 100th birthday celebration, the Zoo named our chick after the avid zoo and animal lover’s character from Golden Girls, Rose.

These hatchlings, when born, are covered from head to toe in extremely fluffy feathers called down feathers. Although these feathers are great for staying warm and cozy, they aren’t great at keeping the chick dry. Similar to when the chick was an egg, parents will take turns keeping the young one tucked in between their legs and body to keep it warm until it molts and grows its sub-adult feathers at 2-2.5 months. 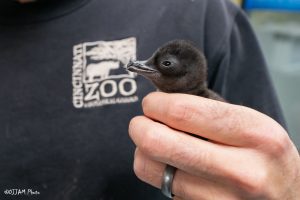 Once these penguins grow into their swimming feathers, they live up to their scientific name Eudyptula meaning “good little divers” and take to the water, using their modified wings to “fly” through the water. Their indigo-blue adult feathers grow in around 4-6 months, at which point they will have reached their adult weight of no more than 3 pounds; less than a bag of apples!

These nocturnal hunters are active mostly at night, catching small fish like sardines, krill, and squid. These birds are adapted for swimming, not flying, with wings and bodies modified for life in the water, including diving to over 200 feet. They forage every day, traveling distances up to 25 kilometers. However, as the smallest species of penguin, these little creatures need to be careful on their journeys because of predators above and below the surface. 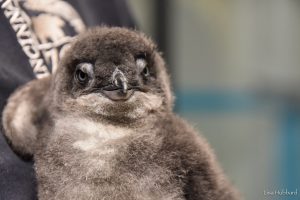 Little blues naturally live to be around 8-10 years old and double that in the care of zoos and aquariums. It might surprise you to know that the Cincinnati Zoo is home to the largest colony of little blue penguins in North America. Keeping the legend alive, keeper Cody Sowers says Rose is healthy and on track to join her colony soon. Because this penguin species is a native to the Southern Hemisphere, they prefer warmer climates so, when the weather gets warmer, she will debut publically in her colony’s Roo Valley habitat.

Little penguins aren’t the only species the Cincinnati Zoo cares for. We are home to African penguins, king penguins, Magellanic penguins, and rockhopper penguins. 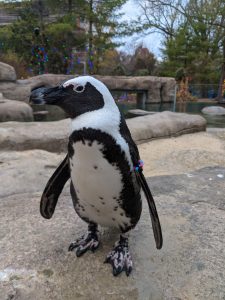 According to the International Union for Conservation of Nature, little penguins are currently listed as least concern however, other penguin species like the rockhopper, African, and Galapagos are vulnerable or endangered. Oil pollution and habitat destruction have contributed majorly to the decline of penguin populations. There are cases of oil spills affecting Little Blue Penguin populations causing more than 20,000 birds to perish. However, there are ways to help support their populations. The Cincinnati Zoo partnered with SANCCOB (the Southern African Foundation for the Conservation of Coastal Birds) which has helped to rehabilitate more than 90,000 African penguins. The zoo offers the VIPenguin program where you can get involved with our fundraiser to support this conservation group. Meet and greet one of our species of penguins then enjoy one of our talented penguin painters creating a one-of-a-kind masterpiece for you to take home and enjoy. You can also learn more about penguins by joining us for the Cincinnati Zoo & Botanical Garden’s Penguin Days, presented by U.S. Bank, running from now until March 11th . In addition, on Friday through Sunday 11:00 A.M. and 2:30 P.M until the end of February, visitors can view our Penguin Parades featuring our king penguins.