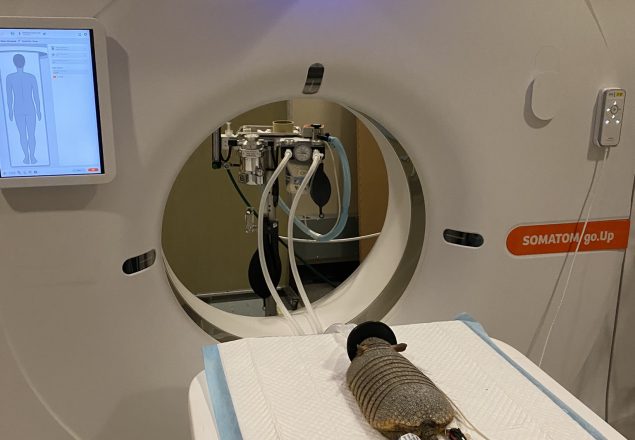 I am new to the Cincinnati Zoo but know that, over the years, MedVet has helped us with cases that required more sophisticated imaging equipment than what we have at the Zoo.  We are grateful for their continued support and collaboration.

Most recently, we took Bell, a 12-year-old female Screaming Hairy Armadillo to MedVet for a CT (Computed Tomography) scan. She had signs of a nosebleed and clear nasal discharge at the end of September, she also became lethargic and was not eating well. We did an exam at the zoo hospital and were not able to pinpoint a definitive cause.

Armadillos have dermal plates that interfere with radiographs by overlapping the important internal structures, so it is very difficult to see any fine details in the skull or body. We did a full dental exam to look for bad teeth that might be causing an abscess or trouble eating, and fixed some minor problems, but did not find anything severe. We started Bell on treatments with antibiotics and anti-inflammatories and she appeared to improve. A few weeks after those meds were finished, staff noted that she had more snot bubbles, and she was acting different. It became apparent that Bell could not see well, and this was a sudden change in her vision. This is highly concerning for a disease process in the skull that could be causing both nasal and eye problems, such as a tumor or a very bad infection (such as a fungal infection).

The only way to see more detail in the head is to do a CT scan. These scans also use x-ray technology but they do it in slices so you can piece back together a 3-D reconstruction of the skull and look inside without any outer structures in the way. This is perfect for an armored animal like armadillos.

3-view to evaluate the nasal cavity in 3 planes, allowing us to look into the sinus without interference from the bones.

Bell was taken to MedVet and anesthetized for the CT. Anesthesia is necessary so the animal is very still for the scan. The radiologists (including Dr. Chase Constant who has helped the zoo many times, and radiology resident Vionna Kwan) were able to review the scan in real time and had information before Bell was even awake.

The radiologists were even able to see enough detail to know that there were no changes to her optic nerve and eyes, which are so small. MedVet’s Ophthalmologist, Dr. Vanessa Kuonen Cavens, came by to look at Bell’s eyes for clues. She was able to confirm that Bell does not have any cataracts, but her eyes were just too small to evaluate anything else!

We also performed a nasal flush to attempt to get some cells and culture samples to try to find clues about why Bell has these signs. We are still waiting for those results. In the meantime, Bell is back in her home at the Zoo, where we are treating her symptoms as needed for her comfort, and she is adjusting to her changes in vision.

11 thoughts on “Banding Together to Help Armadillo “Bell” ”